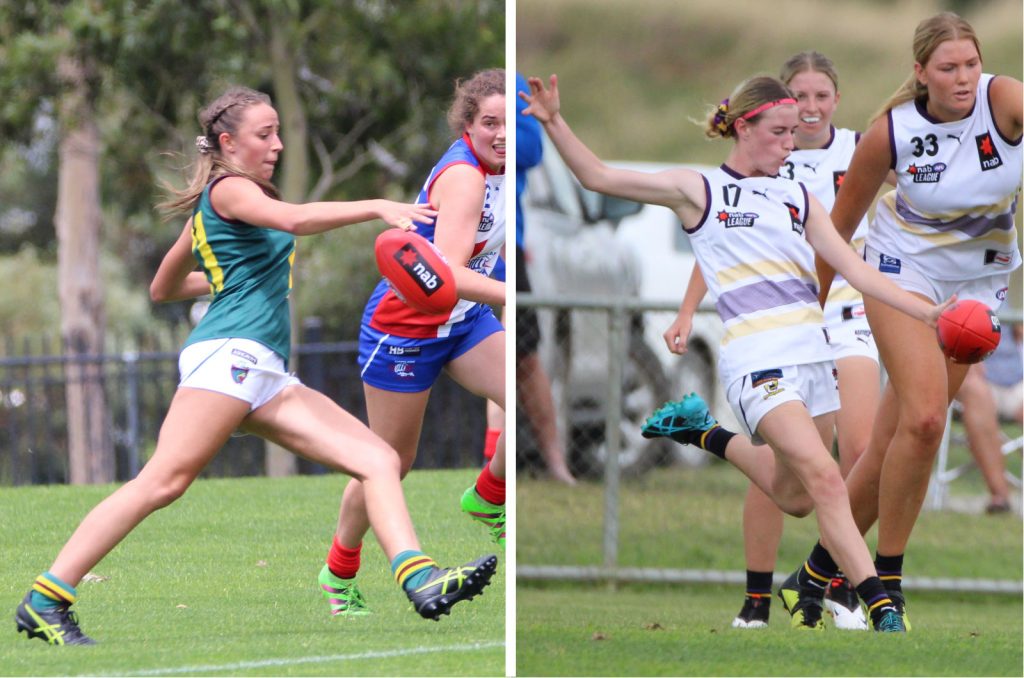 IN a Draft Central first, the evenness of the voting between Tasmania Devils’ Perri King and Murray Bushrangers’ Keeley Skepper in our Facebook group (within one per cent fluctuation), has meant that the two players become the first shared NAB League Girls Player of the Week nominations. Both had outstanding games in their own right over the weekend, and in the final week of the season, earned their place on our Player of the Week honour board.

King is a member of the AFL Women’s Academy, and enjoying a fine season in her draft-eligible year. In her eight games, King is averaging 19.9 disposals, 9.6 tackles and 4.4 inside 50s for Tasmania Devils, whilst also standing out for the Allies in her two matches. A tackling machine, King has been a consistent performer on the inside for the Devils this season, and will be looking towards a huge finals campaign. In the win against the Greater Western Victoria (GWV) Rebels, King racked up 25 disposals, three marks, five inside 50s and laid 13 tackles to lead the way for her side.

Skepper is a bottom-age talent who burst onto the scene a couple of years ago when she was best on ground for Vic Country at the AFLW Under 16s Championships in 2019. Fast forward two years and the Bushrangers midfielder is still a year away from being draft-eligible, but has had an outstanding season, picking up 16.7 disposals, 2.3 marks, 4.9 tackles, 4.7 inside 50s and 2.6 rebound 50s. Whilst the Bushrangers season came to an end in Round 9, Skepper capped off the year with her biggest performance to-date, picking up 24 disposals, six marks, five tackles, 13 inside 50s, five rebound 50s and booting a goal in a compete effort. After an impressive effort for Country’s Under 17s side, and making the 19s team for the clash against South Australia, Skepper could be in contention for the team when they face Queensland next month.

Both players become the second players in their respective sides to be nominated for Player of the Week, with Tasmania Devils and Murray Bushrangers making up the last four nominations. Murray’s Aurora Smith was nominated back in Round 7, with Tasmania’s Amy Bissett nominated in Round 8.