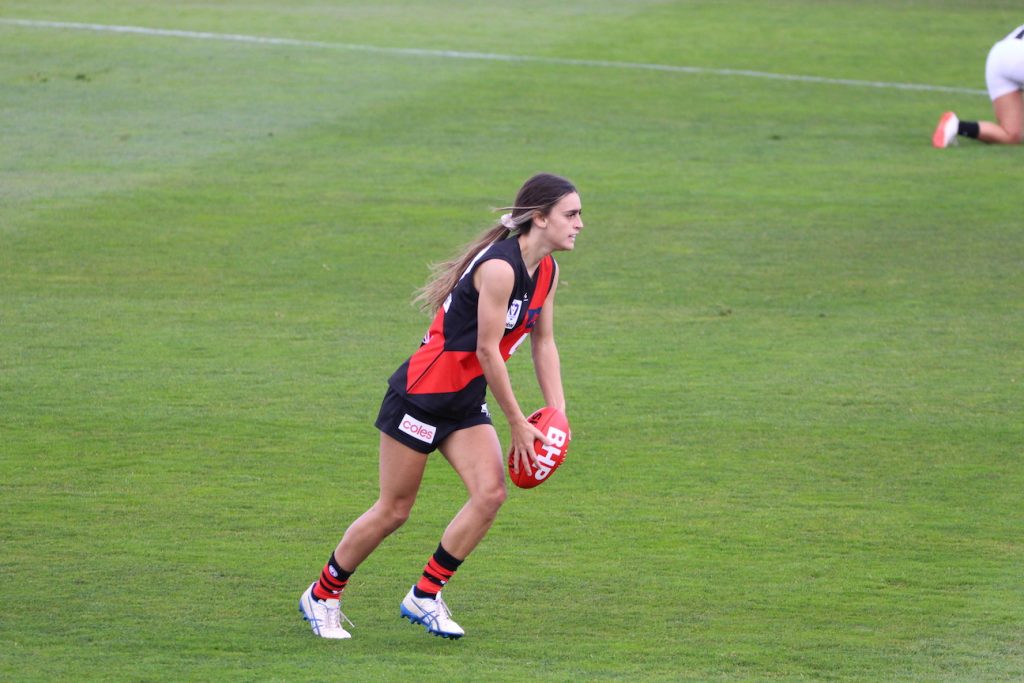 IT might not have ended in the result the Bombers might have liked, but Essendon teenager Elizabeth Snell was again busy in her debut season at the state league level. Sharing her duties between Bendigo Pioneers and the VFL Women’s competition, Snell opted to continue her stay at the state league level rather than play the final NAB League Girls round, having proven all she could at that level. Snell has also already run out for Vic Country twice at the AFL Women’s Under 19 Championships, and with her state set to play Queensland next month, could represent the ‘Big V’ again.

Like many country players, Snell began her elite junior pathway in the V/Line Cup for the Pioneers, and made her way up through the NAB League competition, representing Vic Country at Under 16s level, and then being an extended squad member of the Under 18s team in 2019 before missing out. She made the Vic Country Under 19s squad this year, and impressed through the midfield and rotating forward for the team during their two wins over Vic Country and South Australia. Like all Victorian players last year, Snell missed out on getting back on the park, and opted to rejoin the Pioneers as a 19-year-old prospect, while sharing time with Essendon VFL Women’s side.

Snell made her debut against Hawthorn back in Round 3, using her running capacity and ability to win the ball in close and extract it from the contest to win 15 disposals, four marks and lay eight tackles. Her defensive pressure, combined with her elite agility to often get out of trouble is what makes her a dangerous player for opponents. Returning to the Pioneers and then having Vic Country duties, Snell played her second VFL Women’s game last week in Round 7, as the Bombers celebrated a good win over Williamstown. In that match, Snell had the same amount of tackles as she did touches – 10 – and provided the hard edge she has shown over her junior career.

Snell is a talent with some elite traits and some other areas that are still a work in progress. Her agility, and first few steps out of a contest are what catch the eye the most, while she has clean hands on the inside, able to spot teammates and generally weight the handballs in tight out in order for them to run on. When she wins the ball herself and opts to go, she can often rush her kicks not realising she has more time than she actually does. Her ability to spread around the ground, and have an eye for goals when inside 50 provides her with plenty to work with at the next level, as she continues to develop her kicking and decision making under pressure.

Snell started on the bench in the opening term and after an opposition kick went over her head inside defensive 50, she kept pushing hard and won a contested ball close to the pocket and kicked to the danger zone of the square. Whilst her teammate could not quite drag down the mark, Snell kept buzzing around the contest for the rest of the quarter. She laid a couple of good tackles and ton a free kick for a tackle at half-back. From that free kick, Snell hit a direct kick straight down the middle to set up a scoring opportunities, then when the ball was back deep in defence, Snell had a couple of quick handballs in traffic.

In the second term, Snell laid a good tackle to force a spill at half-forward and then won the ball cleanly up the other end to quickly give off a handball before being tackled and then apply a shepherd for her teammate. Not only did Snell use her work rate around the ground to accumulate the ball, but she showed a great one-percenter to go back with the flight in a marking contest, spoil the ball and then lay a tackle shortly after at ground level.

She had a rest midway through the term and then came on and made an impact immediately, winning the ball off a handball receive, though the kick was turned over. Snell pushed hard to apply a shepherd once again, then courageously put pressure on a mark inside forward 50 to make her opposition defender earn it. After Essendon won a free kick, Snell quickly spread to just outside the forward 50, then put in a kick towards a one-on-one but it was spoiled out of bounds. She had her fourth touch of the term through a clean handball from in close to the outside at half-forward, and laid another strong tackle late in the term.

The third term Snell started right in the middle, though her first interaction with the ball was a free kick against for an overzealous tackle on the wing. She continued to work hard throughout the term, offering as an option in defence, but the ball went over her head, though she backed up quickly and laid a strong tackle close to the line.

She came off for a rest since she had started on the ground, and returned to have a nice pickup and kick from half-back, which was her most damaging kick of the day. Winning it at half-back, she produced a long well-weighted kick to a teammate, but unfortunately the mark was just dropped, though the intent was perfect. After play stopped for a second time due to injury to Aliesha Newman, Snell won the first mark, spreading well on the wing and then kicking forward. She laid a good tackle at half-back after being dispossessed when she was not able to cleanly handball, then got caught holding the ball on the defensive side of the wing. Shortly after she came off the ground.

The intensity lifted in the last term, and Snell matched that intensity, going in fierce with her tackling across the ground. She started on the bench, but came on after a few minutes, and won the ball at ground level, fended off an opponent and quickly kicked. Once again the kick was a little dangerous, crossing the defensive 50 to make it a task for Courtney Ugle, which was spoiled. Luckily the Bombers mopped it up. Snell kept working hard laying a strong tackle at half-back to lock it in, then her next touch was a scrubber kick along the ground, not able to take possession and then was bumped off it. Snell laid another strong tackle in the middle after a restart from a Pies goal to lock it in, then yet another tackle at half-back, albeit with too much momentum landing in her opponents’ back.

Snell came off for a rest, then came on not long after following another Pies goal as Collingwood were well in control. She won her final kick in congestion through the middle, but her kick went to space where only Matilda Zander was lurking on a wing. She won another touch in close in defence with a handball, then tackled her opponent to back it up. 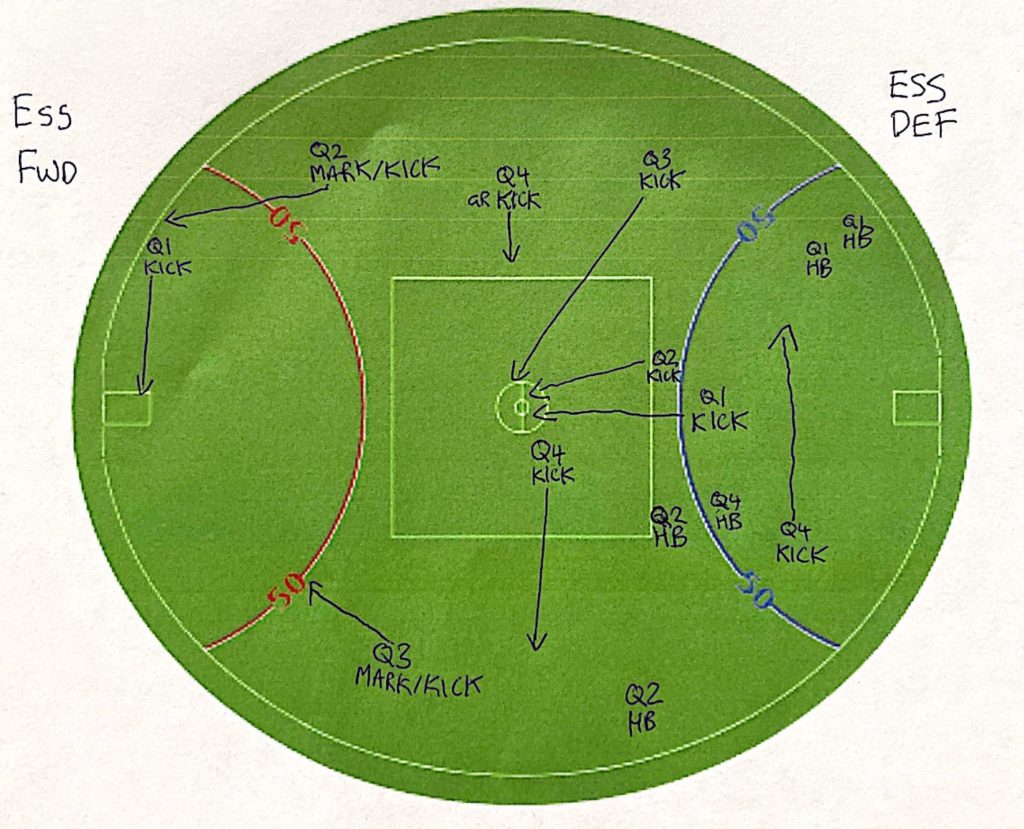 Elizabeth Snell’s disposal map during Round 8.

Note: Some discrepancies in the official statistics include where a tackle will not be counted due to being second across or a free given away.

Snell was one of the more productive Bombers on the day, and whilst some of her kicks might not have been as accurate as she would have liked, she was clean in close, and had a number of impactful touches. Most importantly, her defensive pressure – as expected – was incredibly high, and she would have been one of the most prolific tacklers on the ground. She did give away a few free kicks through tackles, but her intent was right, and she was well supported by her teammates.