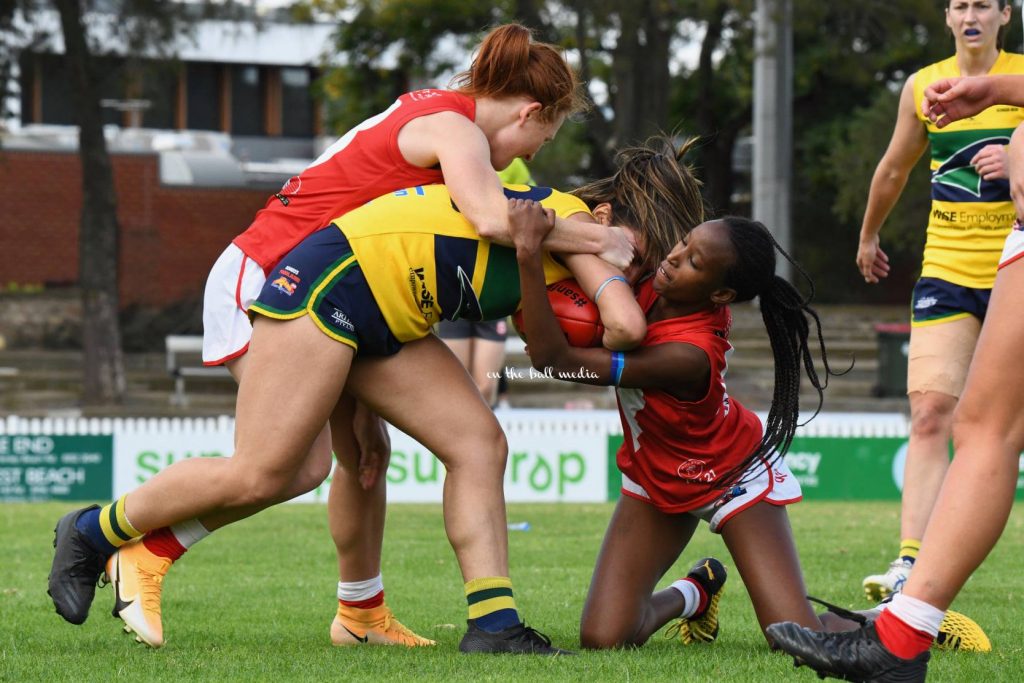 ROUND 8 of the South Australian National Football League (SANFL) Women’s saw Norwood continue its winning run, while the other three winners all occupy the top four spots – Glenelg, North Adelaide and Central District – signalling how close the competition is this season.

A dominant first half from ladder leaders Norwood set up the Redlegs with an impressive 10-point win over West Adelaide. The Bloods welcomed back a host of top-end talents, but the competition’s benchmark this season withstood the challenge, kicking the only three goals of the first half to lead by 19 points at half-time. By the final break, that lead was out to 26 points, and despite the Westies kicking the last two goals of the match, the damage was done with Norwood winning 5.5 (35) to 3.7 (25). Norwood won all the key statistics but not by too much around the ball with clearances (24-23) practically even, and inside 50s (28-22) a slight difference.

In a neck-and-neck match all night, Glenelg has come away with a tight three-point win over South Adelaide despite two goals from rising key forward talent Jorja Hooper. The Panthers youngsters slotted goals early in the second and third term to give her side a sniff putting them back in front, but the last goal of the night went the way of the Bays, thanks to Madeleine Green kicking a winner in the dying few minutes following a titantic struggle up to that point. The Panthers dominated the hitouts (39-25), but the clearances (29-21) went the way of the Bays, with the inside 50s and rebound 50s evenly split.

Revenge is said to be a dish best served cold, and that is exactly what Central District had in mind when the Bulldogs flipped the script on their first meeting. Having controlled most of the game earlier in the season only to be overrun in the last term, this time it was the Bulldogs term to kick a late goal – through Katelyn Rosenzweig – to steal back the lead and claim the victory in the last five minutes of the match. There was never much in it, with six individual goalkickers in total, but Central District got the points in the end, coming away with the 3.6 (24) to 3.5 (23) victory. Sturt comfortably won the hitouts (33-16), but the clearances (26-24) and inside 50s (24-21) were fairly even, whilst the Dogs piled on the pressure with 68 tackles to 47, and clunked 15 contested marks to five.