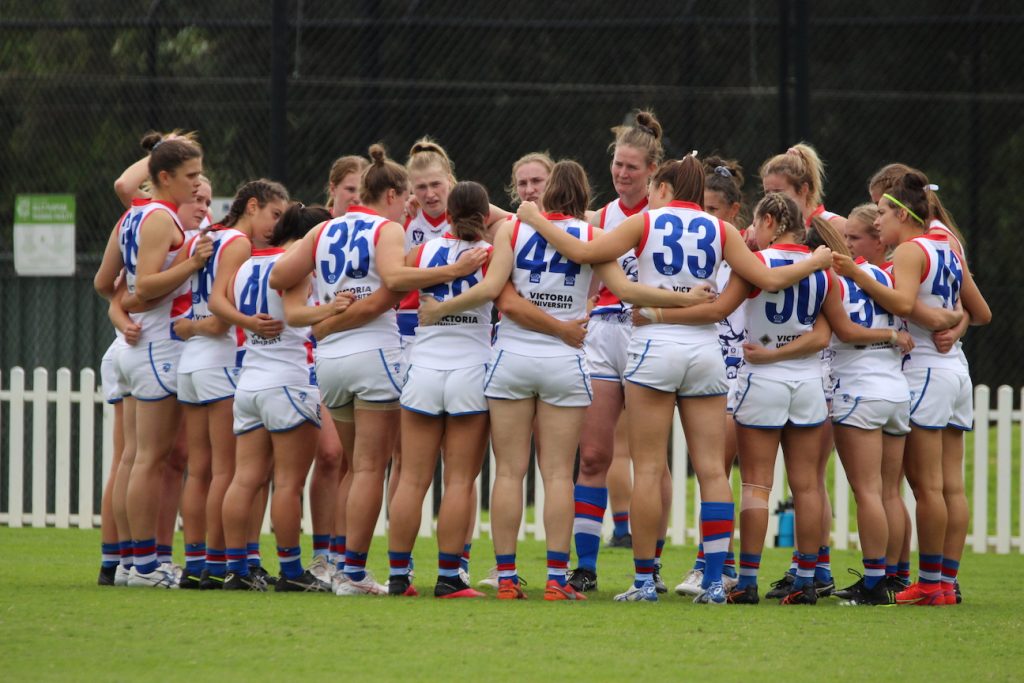 A FORTNIGHT is a long time in football, and for the Western Bulldogs, the past two weeks have seen their fortunes change from bottom two side in the Victorian Football League (VFL) Women’s competition, to potential finals contenders. Prior to the past two weeks, the Western Bulldogs had not won a game since Round 1, losing five consecutive matches to head into the Easter break with a 1-5 record. Fast forward two weeks later, and the Bulldogs are still behind the ledger, but at a much more manageable 3-5, and only percentage outside the top six.

So, what was the catalyst for the change?

It would be easy to say that the injection of AFL Women’s talent is a massive part of it. The Western Bulldogs season finished by the Easter break, so the likes of Eleanor Brown, Gemma Lagioia, Isabelle Pritchard, Isabella Grant, Nell Morris-Dalton, and on Friday night, Elisabeth Georgostathis and Sarah Hartwig filtered through the side. But all bar the standalone sides in Darebin and Williamstown have the flexibility to bring back their AFLW talent, and therefore the team still relies a lot upon its VFL Women’s talent.

Statistically, the Bulldogs do better when they can move the ball by foot and transition between defence and offence. Thanks to Nicole McMahon in the ruck, the Whitten Oval-based side will hardly ever lose the hitouts. In fact, just the once has she lost the hitouts to a direct opponent in Collingwood’s Sarah King, and the Bulldogs were smashed that day, going down by 60 points. Molly Denahy-Maloney is the young up-and-coming ruck to help McMahon in that department, but with her overhead marking and athleticism, she has been deployed predominantly as a forward. But considering the inside 50s were 48-9 in an almost unheard off discrepancy, the home team was lucky not to suffer a worse defeat. The other match where the Bulldogs lost the hitouts was against Port Melbourne where McMahon was not playing.

Indeed, games are said to be won and lost in the midfield, and that is true for the Bulldogs. Whilst clearances are not tracked, there is a correlation between winning clearances and getting inside 50s. Against Hawthorn in Round 1, the Western Bulldogs had 20 more inside 50s and forced the Hawks to be chasing them all day (Hawthorn had 43 more tackles). Most importantly, the Bulldogs finished with a 65.9 per cent kicking ratio from their disposals.

When they are able to use the ball by foot 63 per cent or more, the Bulldogs are 3-1. The only exception was in the loss to Port Melbourne, where, despite going down by 35 points, showed that there was some improvement by sticking with the Borough for large periods of the match. Even the statistics reflected that the teams were fairly even, with the home team on that day just getting nine more looks inside 50. 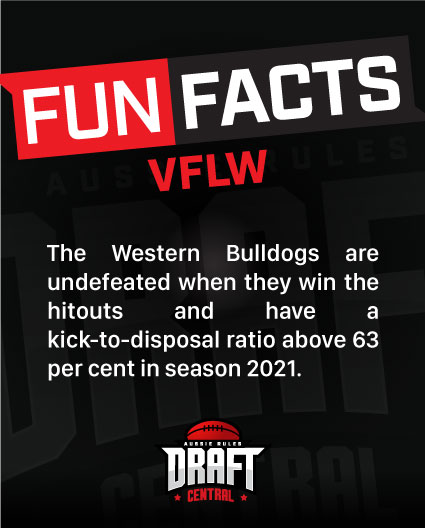 So where do the Western Bulldogs’ strengths lie?

The defence of the Bulldogs has stood up time and time again this season, even in the disappointing losses. Simone Ruedin is having an outstanding season in the back 50, and remains one of the most consistent performers in the competition. The move of traditional midfielders, Brooke Hards and Katelyn Betts into defence has also proved to be a turn of fortune for the Bulldogs.

Betts was a prime mover onball during the first half of the season, and Hards predominantly played forward but has now gone back to her Under 16s days of playing off half-back after spending several years in her preferred position of inside midfield – where she made Vic Country – at Bendigo Pioneers. The pair have complemented the work of the AFL Women’s talents returning, with Brown and first Grant and then Hartwig filling out the other running positions.

Up forward, the return of Morris-Dalton helped straighten the side up in the past couple of weeks, with Mary Sandral also able to be supported with an extra tall down there, though unfortunately Sandral was injured during the win against Darebin. The class of Lagioia  teaming up with the speed and toughness of Amelia Van Oosterwijck in the forward half provides a well-balanced unit.

Perhaps the biggest return in the past fortnight was that of Angelica Gogos, who has averaged 20 disposals and five tackles playing through the midfield. Ellyse Gamble‘s first game against the Saints was also a massive boost, racking up a game-high 27 touches, five marks and two tackles in that match. Then it is these returns of players that flow on to help lift those around them, such as Danielle Marshall who has slotted 5.2 in the past two weeks after 0.2 in the prior two weeks. Having more entries inside 50, and having the flexibility to push up the ground has aided them.

The Bulldogs have also brought in a few youngsters along the way, with Jemima Woods slotting three goals in the win over Darebin on debut, and the Western Jets season is now done and dusted, with teammates Nikita Wright and Stephanie Asciak among others who could return to the team if selected. Greater Western Victoria (GWV) Rebels’ Lilli Condon is another who looked very comfortable at the level, and speedster Nyakoat Dojiok who is among the potential Rebels to debut at state league level in the final month and a half once the Rebels season is over.

What do they need to do to keep it going?

Having the flexibility to rotate through their AFLW talent is important, not only for those players match fitness, but for filling little gaps that the team might not be able to fill with the VFLW-listed talents. A perfect example was Hartwig who provides that intercepting ability combined with the run and carry. The Bulldogs best interceptors are talls, whilst the best runners are smalls, where Hartwig provides the best of both worlds. The class of Lagioia and the hands and leading work of Morris-Dalton, as well as the poise and smarts of Brown make the Bulldogs well-stocked across all thirds of the ground.

The top-performing VFLW-listed talent of Betts and Hards in defence should be allowed to use their mix of power and speed respectively to breakaway and take grass to drive the ball forward. Both are capable of using the ball well when in space, and with the tall targets now inside 50, the Bulldogs have players to aim at. Eliza Morrison is another versatile talent in the forward half who has enjoyed a solid season in 2021, whilst the ruck is an area the Bulldogs will always take control in. If their midfield can win the ball and limit the flow into the defensive 50, then they will be every chance to knock off top sides on their day.

The Western Bulldogs do not have the easiest run home, with Carlton being the only side outside the top six. They face five of the other top six sides, so will truly earn a finals spot if they can win enough games. Hungry to overturn losses to Geelong and Collingwood – their worst two performances of the season – the Bulldogs get the first chance of revenge this Saturday down at Deakin University this weekend, before first-time clashes with Carlton and Essendon. One would think the Bulldogs need to win at least three, but more likely four games in order to make finals, but if they do not, it will be the start of the season that cost them.