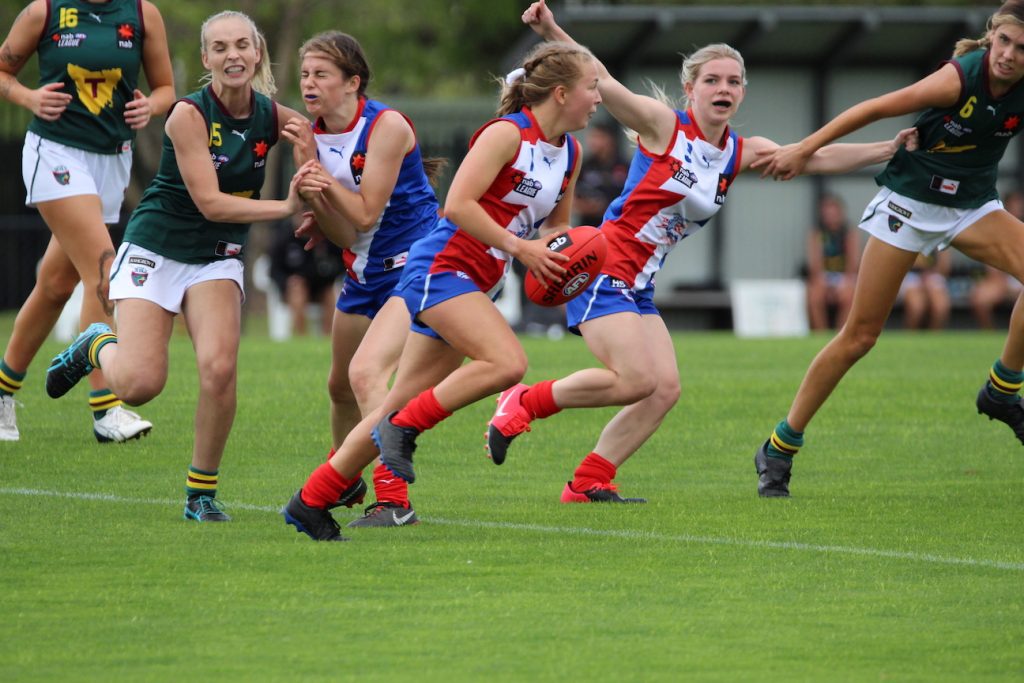 THE FINAL round of NAB League Girls action gets underway over the weekend with six games played across Saturday, and a standalone Anzac Day fixture on Sunday. With the eight teams already locked in for finals – and only the ladder order able to change – it means a number of contests have important outcomes, whilst for others, it marks the end of the 2021 season.

Perhaps the most intriguing matches are early tomorrow, with the first three games all deciding the makeup of next week’s finals series. In the metropolitan pool, Calder Cannons sit third, but could leapfrog Eastern Ranges with a victory over Geelong Falcons at Highgate Recreation Reserve. The Falcons are locked into third spot in the country division, so will either play Dandenong Stingrays or Tasmania Devils in the first week of finals. If the Falcons win, it will effectively secure the metropolitan finals series, with Oakleigh Chargers taking on Northern Knights, and Eastern Ranges taking on Calder Cannons. If the Cannons win, they will temporarily take second spot awaiting the Eastern ranges result.

If the Ranges take care of Northern Territory later in the day, the Ranges will regain second spot, and even temporarily have top spot in the pool, though Oakleigh take on Gippsland Power and will be expected to get the points there to grab the minor premiership. Assuming that happens, the metropolitan pool is set anyway, with Oakleigh taking on Northern and Eastern taking on Calder, with just the home team to be determined from the day’s results. If the Knights win, they still grab fourth on the NAB League Girls metropolitan pool, but also lock in the country finals fixtures too. If Dandenong Stingrays defeat the Knights, then the Stingrays temporarily go to the top of the country division, and the onus will be on Tasmania Devils to defeat the Greater Western Victoria (GWV) Rebels for the top spot.

The Rebels themselves are locked into fourth in the country division, and in a fixture quirk will face Tasmania in the first week of finals again – for the second consecutive week – if they lose to the Devils. If they defeat the Devils, and the Stingrays knock off the Knights, the Rebels will instead face the Stingrays in the first week of finals, and the Devils will lock horns with the third placed Falcons. The Chargers and Ranges are predicted to win their respective games, which if they do that, will remain in the same finals spots as they sit heading into Round 9. The two remaining games – Western Jets and Bendigo Pioneers, and Murray Bushrangers and Sandringham Dragons – have no bearing on the finals series with the teams all preparing for their final game of the season.

For the teams out of the finals race, it will be one last chance for their players to get a run at NAB League level before transitioning into the VFL Women’s, local leagues or for some, the final matches of the AFL Women’s Under 19 Championships.

Kasey Lennox and Zali Friswell return to the side after a stint with Essendon VFL Women’s, and the Cannons’ Metro contingent also return to the side. Abbey McDonald, Georgie Prespakis and Friswell round out the onball ground, with Darebin Falcons’ Peppa Poultney coming back after a solid performance in the Falcons’ loss to the Western Bulldogs. The Falcons have also loaded up on talent with Poppy Schaap, Tess Craven, Gabbi Featherston, Renee Tierney, Ingrid Houtsma, Elizabeth Dowling and Annie Lee all returning to the side after their AFLW Under 19s commitments, with Tierney and Lee also gaining great experience through Geelong’s VFL Women’s side.

The midfield battle between the Stingrays and Knights will be fascinating with Abbey Jordan, Felicity Crank and Emily Shepherd going up against Maeve Chaplin, Ava Jordan and Teleah Smart. Stingrays’ Zoe Hill returns after her debut with the Southern Saints, while Georgia Kitchell is back in the ruck for the Knights. Dandenong’s Jaide Anthony will be one crucial omission following her concussion suffered last week at the AFL Women’s Under 19 Championships, while Jemma Radford is making her debut with the Saints.

Tasmania Devils will blood a couple of debutants for their match against the Rebels, as Ruby Pacey and Kiira Johns come into the side. Their Allies contingent, led by Perri King, Ella Maurer, Meghan Gaffney and Claire Ransom through the midfield are back in action, with goalsneak Amy Bissett the threat inside 50. The GWV Rebels have also brought back their Vic Country representatives, with Paige Scott hot off a three-goal game against South Australia, and Ella Friend, Nyakoat Dojiok, Tahlia Meier and Chloe Leonard all returning. Lilli Condon also comes back to NAB League Girls level after a couple of games with the Western Bulldogs VFL Women’s side.

The result might not have a bearing on the finals series, but both the Western Jets and Bendigo Pioneers are set to to try and win the final game of the season. The Pioneers will be without Elizabeth Snell (Essendon), but otherwise will have a fairly strong outfit, with Tara Slender returning from the championships after playing forward. She will lineup at centre half-back in this game, with other Vic Country representatives, Jemma Finning and Octavia Di Donato also there, alongside bottom-age and Under 16s talents, Tegan Williams and Lila Keck respectively. For the Jets, Montana Ham and Charlotte Baskaran are back in the midfield, with Jemima Woods coming back to NAB League Girls level after three goals with the Western Bulldogs last week, and Stephanie Asciak also testing herself at VFLW level.

A host of AFLW Under 19s representatives and VFL Women’s players will return to the Ranges outfit, taking no changes after Northern Territory who upstaged the Rebels just prior to the break. Isabelle Khoury, Matilda Hardy, Eloise Chaston and Ruby O’Dwyer all return from Hawthorn’s VFL Women’s side last week, while Jorja Livingstone and Georgia Campbell were among the Eastern Ranges’ representatives at the recent carnival. The Thunder will look to make it two from two with Bella Clarke standing out in the opening game, as did Georgia Johnson, though they will be without key goalkickers, Freda Puruntatameri and Ashanti Bush. Other Allies representatives in Grace Mulvahil and Kasey Marsden are named in defence.

The top of the table Oakleigh Chargers have brought in Vic Metro representatives, Charlie Rowbottom, Amanda Ling and Stella Reid straight into the team with Rowbottom named in the forward pocket, and the other two in the midfield. Eliza James showed she can be dangerous inside 50, and whilst her kicking boots were not quite on in Metro’s narrow in over Western Australia, she certainly got to the right spots and has to be watched carefully. The Power welcome back Grace Matser and Grace McRae who missed the club’s first win against Bendigo Pioneers due to Vic Country duties, while Sunday Brisbane returns from an injury she sustained a while back against Murray Bushrangers. Alisha Molesworth impressed at Under 17s level for Country, with Yasmin Duursma another Country bottom-ager to keep an eye on, while Charlotte Van der Vlies and Brooke Vickers are others who have impressed this year for the Chargers.

Murray Bushrangers welcome back bottom-age talent Cassidy Mailer for her first game of the season coming off a long-term injury. With the Bushrangers putting in arguably the strongest team they have all season – with the Vic Country and Allies representatives all lining up – they will be keen to put in a great showing ahead of their final game against the Dragons. Ally Morphett in the ruck, with Aurora Smith and the in-form Zara Hamilton on the wings, Keeley Skepper in the midfield, and plenty of depth and strength around the ground, and the Bushrangers are a good chance in this game.