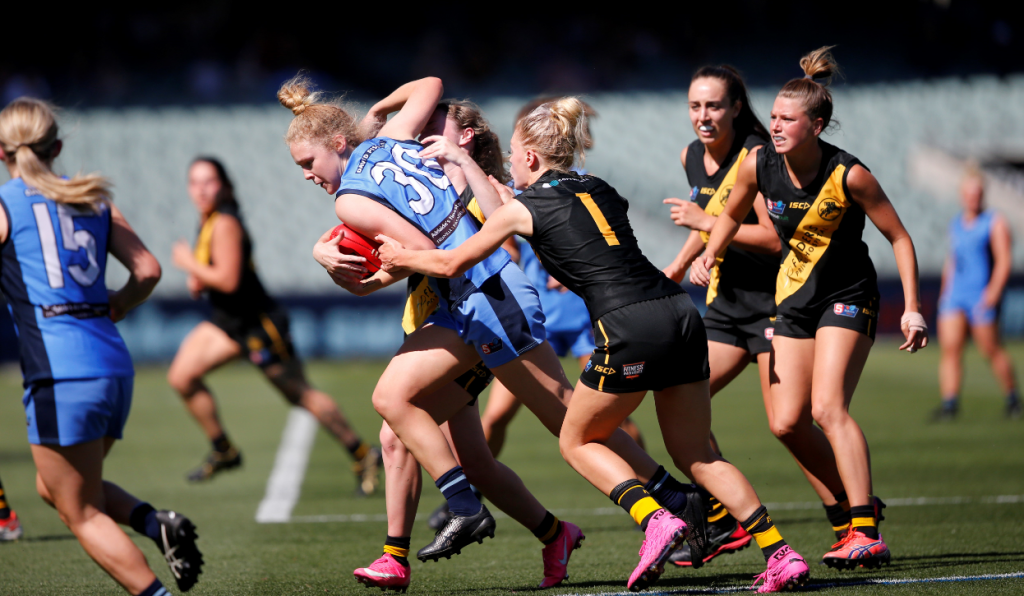 SOME huge ins at the selection table across all eight teams means the intensity and quality of matches will lift from Round 8 onwards, as the State Academy members and some AFL Women’s players return to their state league clubs.

North Adelaide will celebrate Leah Tynan‘s 50th game in the competition against Woodville-West Torrens, welcoming back State Academy members Amelie Borg, Kate Case and Julia Clark, as well as Lauren Gauci among six inclusions, whilst Talia Radan is the crucial loss, out with a back injury. The Eagles have a number of forced changes, with Audrey Holt, Lili Gambranis, Marlie Fiegert and Samantha Hoogeveen-Hill all unavailable. Coming back into the side are the likes of State Academy duo, Jamie Parish and Charlotte Dolan, as well as AFL Women’s talent Renee Forth. Both sides inclusions are huge, and plenty on the line with the Roosters sitting a point inside the eight thanks to their draw, but also a win off the bottom of the table. Lose to the Eagles, and the reigning premiers will slip outside the finals spots. Brianna Arthur had an outstanding game in the midfield last week, and with Leah Tynan and Jamie Tabb taking on the likes of Forth, Shineah Goody and Anastasia Falkenberg, the clearance battle will be an important one to win for both sides.

Coming off a hard-fought win over Central District last week to secure their place in second spot, the Bays now host a South Adelaide team that will load up on talent – but also lose a number of top players at the same time – in what is a top three clash. The home team will bring back State Academy members Brooke Tonon and Tamsyn Morriss, as well as ruck, Molly Affolter, with only Tess Morcom out with injury. Whilst Glenelg has minimal changes, the Panthers have made eight selection moves, with the likes of Czenya Cavouras and Tahlia Meyer out of the side for this round, but plenty of star power coming back in. AFL Women’s-listed players Lisa Whiteley and Montana McKinnon, and State Academy members Gypsy Schirmer, Tahlita Buethke and Lauren Clifton all come back into the side in what is a crucial game for the Panthers. A win will see them grab second as they head for home with their talents filtering back in, and the likes of Jaslynne Smith and Nicole Campbell in terrific form. Jorja Hooper is developing nicely up forward, while Brianna Wedding has been a rock in defence. For the Bays, Ellie Kellock, Jess Bates and Tessa Kohn remain consistent each week, while Sam Franson and Madisyn Freeman are others who can turn a game.

An absolute blockbuster game between the top of the table Norwood and arguably the strongest West Adelaide side of the season presents the Hisense Stadium clash as the game of the round. The Redlegs have exchanged State Academy members with Jade Halfpenny returning to the side for Jess Williams in what will be Leah Cutting‘s 50th game. The ruck has been in sensational form this year, and she has been named forward to share the role with Elizabeth Drake. West Adelaide on the other hand have brought in some of the elite talents in State MVP from the AFL Women’s Under 19 Championships, Lauren Young, as well as fellow Academy members Zoe Venning and Scarlett Griffiths, and Abbie Ballard who returns for her first game of the season off a long-term injury layoff. Add in AFL Women’s talents in Ailish Considine and Chelsea Biddell, and tall target Melanie Elsegood, and the Bloods have stocked up this week. Louella McCarthy and Gretel Ramsey are among the outs for the match, but with Sarah Dargan joining Young and Considine in the middle, the Bloods have a stacked side. The Redlegs still have talent across the board that has led them to the top of the table, The midfield featuring Sophie Armitstead, Jess Macolino and Elisha Gallagher, as well as Morgan Johnston and Lana Schwerdt, will be a tough one to beat, with Sarah Branford another talented teenager ready to impact in this huge match.

The final match of the round in a prime time Saturday night fixture is Central District up against Sturt, with the sides in the bottom four, but one win – and favourable results – will see the winner leap into the top four such is the evenness of the competition. The Bulldogs in particular have a massive chance given their percentage is the second highest in the league. Sturt has a lower percentage, but a win would certainly see them jump past at least one – if not two or three sides. Central District has kept the cards close to the chest, including four players on an extended bench with the trio of State Academy members – Laitiah Huynh, Lauren Breguet and Madison Lane all returning, as well as AFL Women’s representative Chloe Scheer. The Double Blues lose Lucy Griffith to concussion and Amy Brooks-Birve to a knee injury, but have added four players to the side, including a trio of State Academy members themselves in Zoe Prowse, Hannah Prenzler and Alex Ballard. This matchup is all about offence taking on defence, with the Double Blues defensive set up, often featuring Prenzler and Ballard – though both have been named up forward on this occasion – as well as captain Maya Rigter, whilst the Central attack is the most exciting in the competition, with Huynh, Breguet and Scheer roaming to leading goalkicking talents Chantel Reynolds and Katelyn Rosenzweig. Lane and Demi Sonneman up the other end provide the run, with Shelby Smith, Lauren Smith and Caitlen Teague roving to Isabelle Starmer forming a strong midfield core. The battle of the midfields will be fascinating, with Jess Good in ripping form in the ruck, alongside Alisha Gepp, Isobel Kuiper and Jaimee Wittervan onball, while Nicole Baker and Chloe Forby flank Prowse on the forward line.