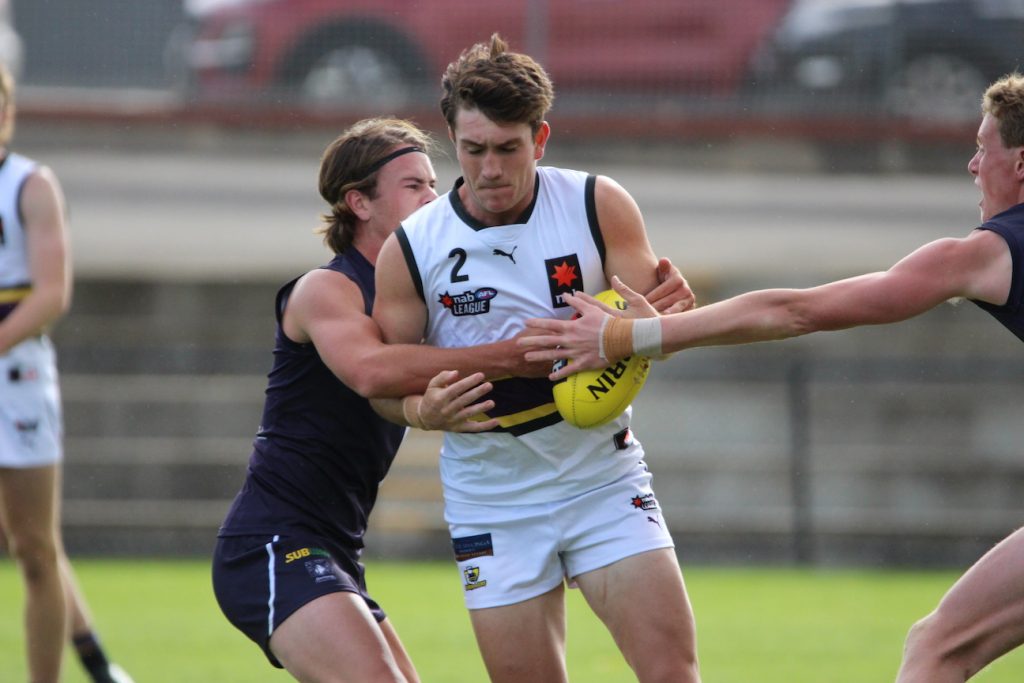 THE FIRST three rounds of NAB League action were pegged as important ones for 19-year-old AFL Draft prospects this year, after the competition was restructured and the top-age lifted to provide ample opportunity for said age group to prove their worth. For some, their stocks have risen immensely, so much so that there is already interest awaiting them at the midseason draft. Others are climbing steadily and will take advantage of greater state league opportunities, while a promising group has been held back by injuries.

Atop the list of 19th-year talents to come out of the NAB League in 2021 is Sandringham Dragons tall, Jacob Edwards. The agile ruck-forward caught the eye with an outstanding preseason intraclub performance, before translating that form into three top-notch games for the Dragons come season proper. Partner in crime, Max Heath has returned strongly too, building on last year’s promise to also be in the mix. Both are still in school though, so will likely garner attention mostly from Victorian clubs.

A bunch of up-and-comers will also feature in the VFL as soon as this round. Western Jets standout Cody Raak ran out for the Western Bulldogs’ reserves on Thursday night, taking four marks among his nine disposals on debut. The Bulldogs NGA product has looked above the NAB League level this year, dominating across his usual centre half-back post with intercept marking and ever-improving distributive skills. Calder Cannons forward Sam Paea was also selected for Essendon in Round 1, clunking five marks.

The game to watch this week for draftable talent will be the AFL Academy clash with Geelong VFL, though there will be some exciting youngsters lining up on the side not many would expect to look at in that sense. Athletic Falcons defender Charlie Ham will suit up for the Cats alongside smooth GWV midfielder Marcus Herbert, while Category B rookie Paul Tsapatolis will also feature having represented Western Jets thus far. Oakleigh ruck Ned Moyle will also run out in that game, as the Academy’s sole top-ager.

Elsewhere, Collingwood and Essendon lock horns on Satirday afternoon and will also blood some youth from the elite talent pathway. Dynamic Oakleigh Chargers forward Dylan Thomas gets a gig for the Magpies after booting six goals in three games, with NGA prospect Youseph Dib set to start up forward while Will Hart has been named as an emergency. Nippy Bendigo midfielder-forward Jack Hickman has been named for the Bombers, with Pioneers skipper Jack Evans also an emergency.

Speaking of emergencies, Tasmanian pair Oliver Sanders and Tyler McGinniss are on that list for North Melbourne. Sanders has averaged 29 disposals across his two NAB League outings this season, while 20-year-old McGinniss also showed promise in those two matches. Fellow Devils product Oliver Davis may also earn his own state league shot, set to link up with Sturt over in the SANFL having already trained with the Double Blues.

In terms of other prospects in the mix for opportunities at higher levels, Dandenong’s Will Bravo, Murray’s Charlie Byrne, and Eastern’s Corey Preston should both garner VFL attention after spending the preseason fighting for AFL spots at Hawthorn, Essendon, and Western Bulldogs respectively. While he has not been sighted on-field as of yet, Zavier Maher is a recent Carlton VFL signing having also spent the preseason mixing it with senior Blues.

Bravo’s Stingrays teammates Clayton Gay and Bryce Milford should both soon link up with Casey after spending time there. Oakleigh Chargers midfield duo Lochlan Jenkins and Fraser Elliot have also proven their worth thus far, as has Ewan Macpherson for Northern after being overlooked by the Bulldogs as a father-son. Charlie McKay is also in that boat, having been passed on last year by Carlton.

There are plenty of others in the mix too, with revamped rules allowing for more pathways products to feature each week in the VFL. With so much talent vying for those spots after three rounds of NAB League football, there is sure to be pretty stiff competition for those expanded spots. Some will filter to that next level, while others will stay in or return via the NAB League, as others spill into local leagues. The regeneration will continue too, as Under 17 prospects will soon enter the NAB League at a greater rate.