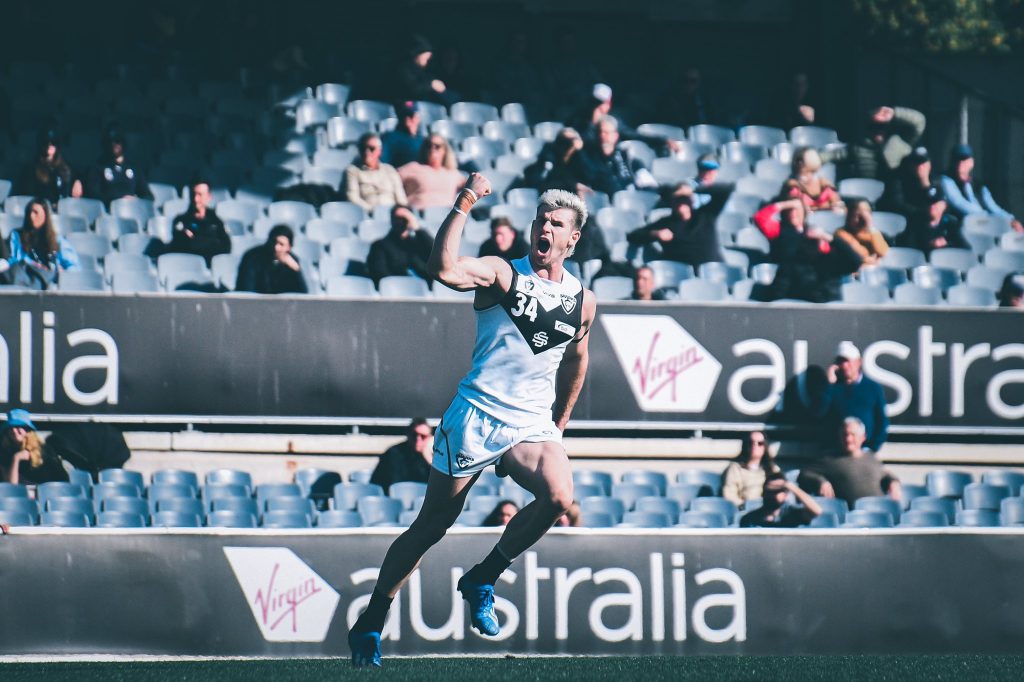 A NEW era and a new competition full of surprises saw a number of clubs from New South Wales and Queensland join the still rather oddly-named Victorian Football League (VFL), and the majority came away with the points. The four AFL-aligned clubs in the two northern states on the east coast joined the competition, with standalone teams, Aspley Hornets and Southport Sharks also joining the fold, as did the Northern Bullants who returned to the competition. With 11 games played every weekend in the new 22-team competition, the competitiveness to finish inside the top eight has never been greater.

The match of the round was easily Southport’s come-from-behind win over Carlton at Ikon Park on Saturday. The Blues raced out of the blocks to pile on six goals to two in the opening term and lead by 26 points at quarter time. The Sharks began to claw their way back in the second, kicking five goals to four to draw to within 19 points at the main break, but the Blues seemed to keep them at arms-length. Carlton kicked 4.6 to 4.0 in the premiership quarter to again extend out to 25 points with a quarter to play, but the visitors were not done with just yet. Connor Nutting kicked two goals in the opening six minutes, and by the time Jacob Dawson had converted a major, the deficit was back in the single digits midway through the term, Lukas Webb brought it back to two points a few minutes later, and after Dawson levelled the score with a behind in the 20th minute, many thought it could be the competition’s first draw.

AFL-listed youngster Lochie O’Brien had other ideas, converting a goal in the 25th minute, and when Matt Shannon kicked a major at 26:38 on the clock, it appeared the Sharks had fought gallantly, but would not be able to comeback from a 12-point deficit, The last eight minutes of the term saw the Sharks relentlessly attacking, and forcing a rushed behind, which would prove ultimately important in the end result. Fraser Thurlow kicked a major in red time, and then it was just five points in it. The former AFL-contingent at the Queensland club had stepped up throughout the game, and indeed it would be Webb who would be the man of the moment, kicking a match-winning major in the last minute to seal the game. At one point, the deficit had got out to as much as 31 points, but the visitors had kept believing, and stunned the home side, 17.7 (109) to 16.12 (108).

Whilst he might not have kicked one in the final term, ex-Bulldog Billy Gowers had a day out with five goals from seven scoring shots, 15 disposals and six marks. Thurlow absolutely dominated the ruck for the Sharks, notching up 49 hitouts, but then going forward to slot three goals and take eight marks from 12 touches. Nutting, a former Gold Coast Academy talent kicked the three goals from 11 touches, while Webb’s two goals in the final term added to his 24 touches, five marks and four tackles. Andrew Boston (27 disposals, 11 tackles), Dawson (26 disposals, seven tackles and one goal), Jesse Joyce (23 disposals, four marks, three tackles and a goal) and Michael Manteit (21 disposals, five marks, two tackles and a goal) were among the other top ball winners.

Despite the loss, Liam Stocker practically kicked down the door for AFL selection with a whopping 38-disposal and 13-mark game, as David Cuningham (28 disposals, four marks, four tackles and a goal), Sam Ramsay (22 disposals, seven marks and five tackles) and O’Brien (21 disposals, six marks and a goal) also found plenty of the footy. Matthew Owies kicked a straight four goals from 12 touches, six marks and four tackles, while ex-Pie and Crow Ben Crocker slotted 2.3 from 11 touches and five marks up forward. Another ex-AFL listed talent in Toby Wooller returned to Victoria from Queensland to kick 1.2 from 16 disposals, six marks, eight tackles and have six hitouts tor the Blues.

Fellow standalone Queensland side Aspley Hornets also sent a message to the rest of the competition with an absolute belting of one of Victoria’s proudest clubs Port Melbourne. The Hornets blew the Borough away in the opening term with a 10 goal to two first quarter, and whilst the visitors managed to get back to within 43 points at the final break with six goals to two over the next two quarters, the damage was done and the Hornets booted six last quarter goals to win 20.13 (133) to 12.8 (80). Ryan Bastinac was ridiculous with 39 touches, four marks, six tackles and three goals, with Matthew Payne (28 disposals, seven marks, four tackles and two goals), Corey Lyons (27 disposals, five marks and one goal) and Matthew Hammelmann (11 disposals, eight marks and 4.4) among the dominant players for the Hornets. Harvey Hooper (27 disposals, four marks and two tackles) tried hard for the Borough, while Anthony Anastasio and Matthew Signorello both slotted three goals apiece.

Also in the Sunshine State, Brisbane Lions reserves knocked off Essendon’s reserves in a 66-point belting at Moreton Bay Central Sports Complex. Rhys Mathieson did his chances of a recall no harm thanks to a lazy 34 touches, eight marks and two goals, while Connor Ballenden (31 disposals, 15 marks and one goal) and Keidean Coleman (29 disposals, nine marks, three tackles and two goals) were also up there with the best for the Lions. First-year player Carter Michael showed he has the capacity to match it at senior level, amassing an impressive 25 touches on debut. Ex-Lion Tom Cutler had a team-high 29 disposals and 10 marks for the Bombers, while Nick Bryan racked up 34 hitouts, five marks and three tackles to show off his around-the-ground work with 27 touches.

The only Queensland team to suffer defeat in the opening round of the VFL was Gold Coast Suns, going down by 67 points to a red-hot Western Bulldogs outfit. The Bulldogs kicked 10 goals to three in the opening half to set up the win, restricting the Suns to just 12 scoring shots as the home team won, 16.13 (109) to 6.6 (42). The potent tall forward combination of Josh Schache (19 disposals, 12 marks and 5.4) and Jamarra Ugle-Hagan (12 disposals, 2.1) was the issue for the Suns, though father-son talent Ryley West was one of nine individual scorers, picking up 22 disposals, five marks and four disposals in the process. Will Hayes (29 disposals, 11 marks), Riley Garcia (24 disposals, three marks and nine tackles), Lin Jong (24 disposals, seven marks, four tackles and a goal) and Buku Khamis (21 disposals, 11 marks) were other AFL-listed Dogs impressing. For the Suns, Brayden Fiorini (31 disposals, 11 marks and six tackles) and Will Brodie (30 disposals, 10 marks and six tackles) had days out, while talented AFL Academy member Austin Harris kicked two goals from six touches, two marks and three tackles.

In the all-New South Wales battle, Sydney Swans emerged victorious of the GWS GIANTS, booting 12 goals to seven after quarter time to record a 15.6 (96) to 10.10 (70) victory. Colin O’Riordan had 32 disposals and 14 marks, as other Swans-listed talents in Lewis Taylor (32 disposals, eight marks and one goal) and Ryan Clarke (31 disposals, eight marks and four tackles) both racked up the ball with ease. Hayden McLean and Harry Morrison slotted three majors apiece, whilst Paddy McCartin returned to the field to have 19 disposals and nine marks in a promising return. Teenage talents, Sam Thorne (13 disposals, six marks and a goal) and Marc Sheather (10 disposals, three tackles and a goal) also gained some important experience. For the GIANTS, Alex Smout racked up 33 disposals, as Tanner Bruhn showed his AFL debut cannot be too far away with 27 touches and two goals. Josh Green, brother of GIANTS’ Tom stepped up to have 21 touches, as AFL Academy member Josh Fahey had the nine disposals, three marks and three tackles in the loss.

In a couple of the more memorable matches for the VFL, two all-standalone Victorian clashes saw Frankston Dolphins and Williamstown Seagulls win easily against Coburg Lions and Northern Bullants respectively. The Dolphins, led by ex-Bomber Josh Begley (six goals), and ex-Pie and Saint Nathan Freeman (40 disposals), proved too strong for the Lions. Coburg’s Marcus Lentini suffered leather poisoning himself, matching Freeman with a whopping 40 disposals and slotting a goal. Josh D’Intinosante and Mitch Podhajski both slotted three goals in defeat. For the Seagulls, they booted seven goals to one in the first half to set up the victory against the Bullants, as Jake Greiser (29 disposals, eight marks and one goals), Mitch Hibberd (29 disposals, five marks and one goal) and Liam Hunt (29 disposals, one goal) ran rampant. Joel Ottavi slotted four goals from eight scoring shots, while ex-Crow Jordan Gallucci slammed home three goals from 21 touches and six marks. For the Bullants, Tom Wilson had the most touches with 25 and six marks, while ex-GIANT and Roo Paul Ahern had 23 disposals, four marks, four tackles and kicked a goal.

Pies fans had something to smile about over the weekend, with a hard-fought seven-point win over Werribee, 10.9 (69) to 9.8 (62). Second year talent Jay Rantall put his hand up to return to an injury-depleted AFL lineup with 28 disposals, five marks and six tackles, while Tyler Brown (22 disposals), Caleb Poulter (18 disposals, seven marks and a goal) and Ollie Henry (11 disposals, seven marks and two goals) were among the young Pies to make an impact. Ex-Cat Wylie Buzza slotted four goals from 10 touches and four marks, as Tom Gribble (30 disposals, nine marks and five tackles) and Matthew Hanson (28 disposals, four marks and three tackles) did their thing. It was a much more one-sided contest for Richmond’s 40-point win over Sandringham Zebras, as the Tigers piled on 10 goals to three in the first three quarters to lead by 47 points at the final break, before the Zebras cut the deficit back rallying in the final term. Samson Ryan kicked three goals up forward, as Callum Coleman-Jones (22 disposals, six marks, 13 hitouts, four tackles and two goals) found plenty of the football. Jack Ross (34 disposals), Pat Naish (33) and Riley Collier-Dawkins (31) all easily dominated proceedings, whilst for the Zebras, Shaun McKernan was outstanding with 23 disposals, 10 marks, 11 hitouts, four goals and four tackles, while Ryan Byrnes (22 disposals, eight marks and a goal) and Oscar Clavarino (20 disposals, 14 marks) were among the St Kilda-listed talents to impress.

The two Sunday clashes between AFL-aligned clubs resulted in the Casey Demons getting a comfortable 41-point victory over Hawthorn at Box Hill, while Geelong posted a whopping 79-point thrashing over North Melbourne to sit at the top of the VFL ladder. Kade Chandler (25 disposals, 10 marks and a goal), Neville Jetta (25 disposals, 10 marks) and Aaron Vandenberg (25 disposals, seven marks, five tackles and a goal) were busy around the ground, whilst Ben Brown‘s debut in the red and blue (18 disposals, six marks and three goals) was overshadowed by a monstrous performance from Sam Weideman (16 disposals, seven marks and 7.2). Developing Hawk tall Emerson Jeka was one of three in the brown and gold to slot three majors in the loss, while Lachlan Bramble (20 disposals, eight tackles) and Michael Hartley (20 disposals) were among the Hawthorn-listed players to impress. For the Cats, Zach Guthrie had a day out with 27 disposals and 11 marks, as Charlie Constable (26 touches) and Oscar Brownless (24) pressed their cases for a call-up. Josh Jenkins and Ben Jarvis both slotted four goals apiece in the massive win, as two of eight individual goalkickers. Former Bushranger and Hawk’ Mat Walker had three goals from six scoring shots, as well as 16 touches and 10 marks in a dirty day for the Roos, while Dom Tyson (29 touches), Harry Jones (23) and Will Walker (20) tried hard.