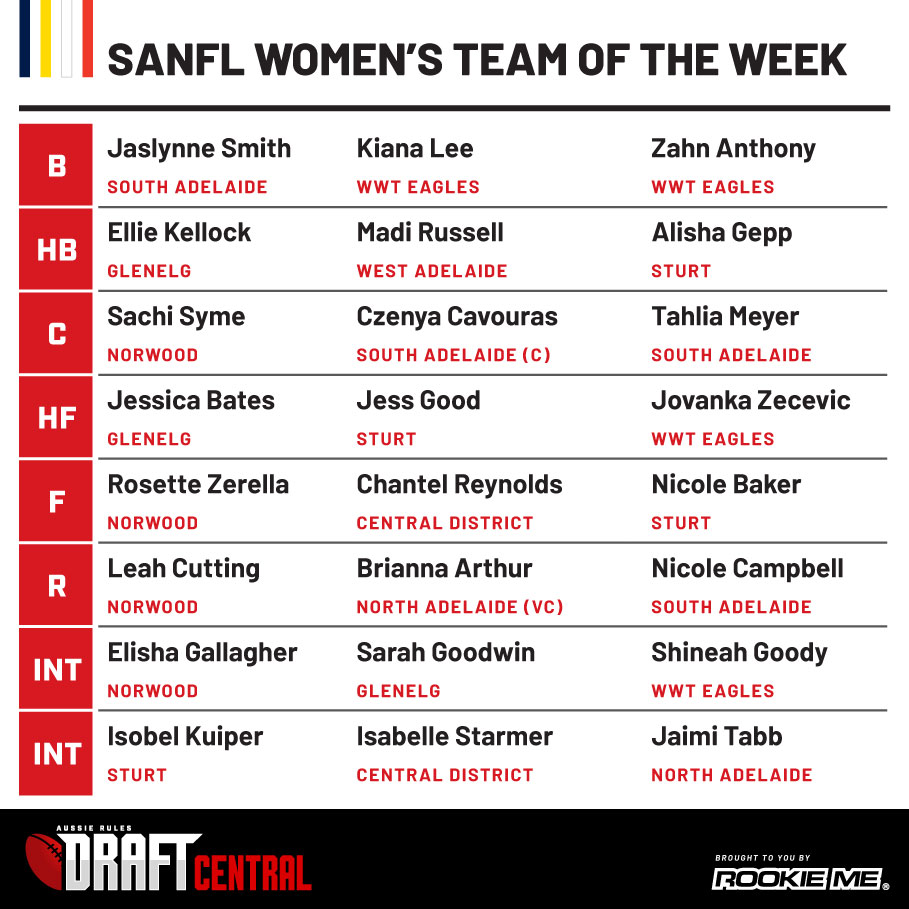 THERE were a few teams that put together big wins, and others that had tight contests, to make quite the interesting spread in this week’s Draft Central South Australian National Football League (SANFL) Women’s Team of the Week for Round 7. Four sides have four players named in the side for the first time, and one side only having the one representative after a heavy loss.

In a week where the individual midfield and ruck performances were unbelievable, it meant some players were unlucky to miss out whilst others were forced slightly behind their usual position to earn a spot in the team. South Adelaide’s Czenya Cavouras was named captain of the hypothetical side after her outstanding effort on the weekend, one of four Panthers in the team. She is joined in there by Nicole Campbell, Tahlia Meyer and Jaslynne Smith, four of eight players from the game against Woodville-West Torrens Eagles.

The Eagles had four players in the side themselves despite the loss, with Kiana Lee and Zahn Anthony in defence, Jovanka Zecevic named at half-forward for this time, and Shineah Goody making the interchange after another impressive performance from the teenager. At the other end of the scale, West Adelaide’s Madi Russell was the sole representative in the side, named at centre half-back, while Sarah Dargan was nominated as an emergency alongside South Adelaide’s Sorian Moon and Central District’s Shelby Smith.

Whilst the Bulldogs captain was another unlucky one not to make it in due to the ridiculous depth of midfield talent this week, her teammates Chantel Reynolds (full-forward) and Isabelle Starmer (interchange) did make the team. Starmer was unlucky not to be starting ruck, but the overflows of rucks this week meant that even Sturt’s Jess Good had to be named as a centre half-forward. Also in the team with Good are Double Blues’ Alisha Gepp, Nicole Baker and Isobel Kuiper as another team with four players.

Norwood has a quartet of talent in the Round 7 team too, with Sachi Syme named on a wing, Rosette Zerella in a forward pocket, Leah Cutting as the starting ruck once again, and Elisha Gallagher on the interchange. They knocked off North Adelaide, with this week’s vice-captain, Brianna Arthur named on the ball and Jaimi Tabb coming off the bench. The final team rounding out the side is Glenelg, with Ellie Kellock back in the side, this time at half-back, while Jessica Bates is at half-forward and Sarah Goodwin has been named on the bench.

DRAFT CENTRAL SANFL WOMEN’S TEAM OF THE WEEK: ROUND 7