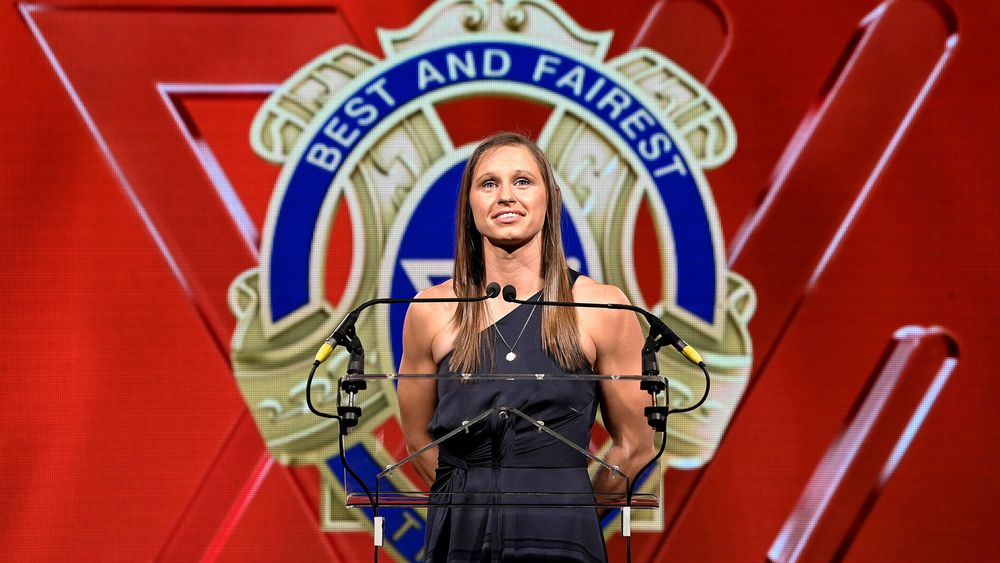 THEY were the two favourites coming into the night, and in the end, Collingwood’s Brianna Davey and Fremantle’s Kiara Bowers have capped off fantastic 2021 AFL Women’s seasons by sharing the league’s highest individual honour at the W Awards last night. The pair polled 15 votes apiece, one ahead of Western Bulldogs’ Ellie Blackburn and GWS GIANTS’ Alyce Parker.

Davey averaged 23.8 disposals, 4.8 clearances and won almost 50 per cent of her possessions in a contest, which earned her the AFL Players Association’s Most Valuable Player (MVP). Bowers averaged the 21.1 disposals, 11.0 tackles and 6.5 clearances per game, coming second to Davey in the AFLPA MVP Award.

The Magpies co-captain led her side to its first finals win this year, and had a remarkable finish to the season which saw her claim three consecutive best-on-grounds between Rounds 4-6 to take the lead by Round 5 and stretch her lead out to four votes with three rounds remaining.

Bowers drew within a vote in Round 7 and Monique Conti kept in touch with a best on ground effort for the Tigers. Whilst none of the trio would poll in the penultimate round, it led to a tense final round, which saw Bowers pick up a vote in the final round’s loss to North Melbourne. Davey did not poll in the final two rounds, but had done enough to hold on and share the award with the tackling machine.

A late burst from Melbourne’s Karen Paxman and Parker saw them finish inside the top five, with Blackburn polling three in the final round to add to her early lead where she got out to a two-vote advantage after Round 4.

Six debutants and two five-time winners highlighted the 2021 AFL Women’s All-Australian team. North Melbourne’s Emma Kearney and Paxman were both named on the interchange, making it the fifth – maximum – time the pair have achieved the honour. At the other end of the scale, a couple of Pies in Brit Bonnici and Ruby Schleicher made their debuts alongside fellow inaugural AFL Women’s players Breann Moody and Katie Brennan. Fremantle’s Janelle Cuthbertson and the youngest member of the squad, second year player Georgia Patrikios rounded out the half dozen first-timers.

Davey was named as captain with Bowers nominated as vice-captain in the team, whilst Davey’s Magpies were represented the most in the side with four players – Davey, Bonnici, Schleicher and Chloe Molloy – whilst the premiers Brisbane Lions have just the one player in the side – best on ground in the 2021 AFLW Grand Final, Kate Lutkins.

Melbourne dynamo Tyla Hanks capped off a fantastic year by taking out the 2021 AFL Women’s Rising Star Award. The former Gippsland Power midfielder topped the leaderboard with 48 out of a possible 50 votes, finishing 16 votes clear of Richmond number one pick, Ellie McKenzie. West Coast’s Mikayla Bowen polled 22 votes to round out the podium, followed by St Kilda’s Tyanna Smith and Brisbane’s Nat Grider.

The one award that was no surprise coming into the night was the leading goalkicker, with Vescio becoming the first two-time winner of the accolade. Having taken out the award back in the inaugural season of 2017, the clever forward doubled up with a 16-goal season in 2021. She finished two goals clear of Molloy, Brennan and Fremantle’s Gemma Houghton, with Brisbane’s Dakota Davidson rounding out the top five thanks to 13 goals.