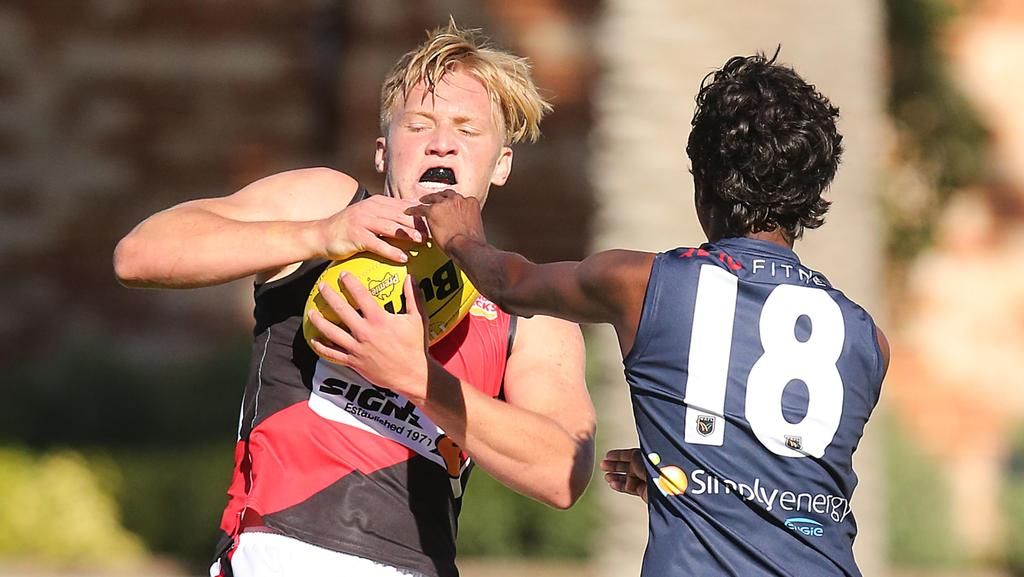 THE 2021 WAFL Colts competition rolled on into Round 3 over the weekend, with the four fixtures providing some fairly competitive action. The West Australian Under 19s talent continues to build into the new campaign, with Claremont and Perth both enjoying spurts of momentum in our featured match of the round, on Saturday morning.

After being blown out of the water by Swan Districts in Round 2, the Demons came out with hellish intentions and dominated the opening exchanges. The Tigers fought back valiantly though and got back to within striking distance at half time, before mounting a heap of pressure thereafter and eventually running out comfortable 43-point winners, 12.13 (85) to 6.6 (42).

We take you through some of the top performers from either side in our Scouting Notes. Please note, they are purely the opinion of the individual scout.

The speedy small is only light, but electric at full flight. He was initially a little fumbly at ground level and could not quite find clear passage out of traffic, but looked ominous once he worked onto the outer and was able to break the lines in a more linear manner. Having been sighted a lot in the back half during the opening half, Jones worked well at half-forward thereafter with good attacking run through the corridor. He finished nicely for his only goal of the game during term three after composing himself inside 50, capping off a promising 16-disposal display.

Mumme was Claremont’s second-most prolific ball winner on the day with 19 touches, and his drive from midfield was important as the Tigers took over after quarter time. His burst with the ball and repeat efforts in congestion made for some exciting passages forward, allowing his side to quickly gain momentum. He booted a goal late in the second term and proved a factor at ground level with hard tackles, despite showing raw disposal at times.

One who has enjoyed a move into the midfield, Blurton was super classy on the ball and showcased great speed away from congestion. The Fremantle NGA prospect popped up in eye-catching bursts, often zipping away having sharked the ball cleanly, and dashing towards Claremont’s attacking 50. He did well to stay on the move and generate some energy in the engine room, with his spread to the attacking half also quite aggressive at times. Blurton also got on the board with Claremont’s first goal, finishing nicely from a snap in the second quarter.

A necessary point of difference in Claremont’s midfield mix, Sheldrick was the contested bull for his side on Saturday. He finished well clear as the Tigers’ top ball winner with 28 disposals, contributing plenty of hard work at the stoppages while also accumulating touches around the ground. Sheldrick also showed good courage with a mark going back with the flight and proved the kind of player Claremont needed to set the tone after being well down at quarter time.

A tall and rangy wingman who likes to attack with his forward run, Allan became more productive as the contest wore on. He showed good spacial awareness in the second term to mop up a loose ball and handball over his shoulder, before applying a shepherd to send his teammate away safely. Allan’s most impactful plays came after half time though, as he began to provide run-and-carry in the attacking half and put the ball into dangerous areas by foot. One transitional passage saw him incite a handball chain on the outer, before delivering well to Joshua Ledger inside 50. The son of former Hawthorn and Fremantle player, Ben, capped off his game with a set shot goal in the final quarter. He is not father-son eligible for either AFL club.

Arguably the standout forward afield, Brown was able to gain good confidence having been gifted two of his total four goals. The Under 17 state squad member first got on the board in term two after a Perth defender tapped straight to him, allowing for a straightforward snap conversion on the run. He was most dangerous during the following period though, making good on the quality service which came his way for two set shot majors, before snapping up a second gift as Perth again turned the ball straight over inside defensive 50. Having impacted the scoreboard, Brown went on to showcase more of his marking prowess leading up the ground in the latter stages, but at 200cm, has plenty of filling out to do as he develops. To his credit, he took his chances well and grew throughout the game.

Ben Ramshaw was one a reliable figure down back for the Tigers, notching 18 disposals and four marks. Tall defender Hugh Davies fared well in a tough job and even took on some of the kick-in duties. Another defensive standout was Samuel Gilbey, who provided daring dash and nice aerial plays from his post. In the ruck, Fremantle NGA Eric Benning highlighted his athleticism and ability to follow up at ground level, finishing with 14 disposals, 18 hitouts, and five marks. The Tigers were also serviced well by some exciting smalls and wrestled back momentum brilliantly.

The focal point of Perth’s attack, Quartermaine started brightly as the Demons got on top and finished with quite respectable numbers of 18 disposals, nine marks, and three goals. While not the tallest key forward in the competition, Quartermaine is able to compete aerially with his combination of strength and general forward nous. Time and time again, he gained massive separation from his direct opponent to mark on the lead, which was the method of attack for all three of his goals. If not for some inaccurate kicking and shots falling short, the Demons forward could well have finished with a bag, but that was not to be.

Undoubtedly the best player afield, Avery was also the most prolific by far as he gathered a whopping 39 disposals (29 kicks) and seven marks. The former Claremont defender swept up almost everything which came his way, reading the play better than anyone else to hit ground balls first and also inflict his usual intercept marking play. He pressed up aggressively in the first half to form a formidable wall at halfway, before later reverting to more work deep inside his own 50-metre arc. As the designated kicker from defence, Avery distributed mostly by foot and was usually reliable in that space, though saw plenty of balls come straight back his way as Claremont piled on late pressure. Still, Avery showed plenty in an under-siege position and looked primed to step up for a senior berth in quick time.

One of Perth’s best midfielders on the day, Inverarity racked up 24 touches and worked hard for eight marks, while also laying nine tackles. He boosted his numbers well by doing some solid contributions on the inside, while also getting involved in handball chains and consistently working to provide an outlet option. His work rate got him a goal in the first term, the first of the day as he was left unattended inside 50. Inverarity accumulated up and down the ground, cleanly moving the ball on to his teammates with many touches which would often go unnoticed. He was also able to bring teammates into the play and proved productive overall.

Deklyn Grocott finished with 21 disposals and six inside 50s as one of Perth’s key drivers of the ball, while Angus Luers showed plenty of promise with his 17 touches and six marks, capped by a goal. Jarrod Sturch worked for 27 hitouts in the ruck, as Jack Evans showed good signs in midfield and Daniel Hill was lively up forward.