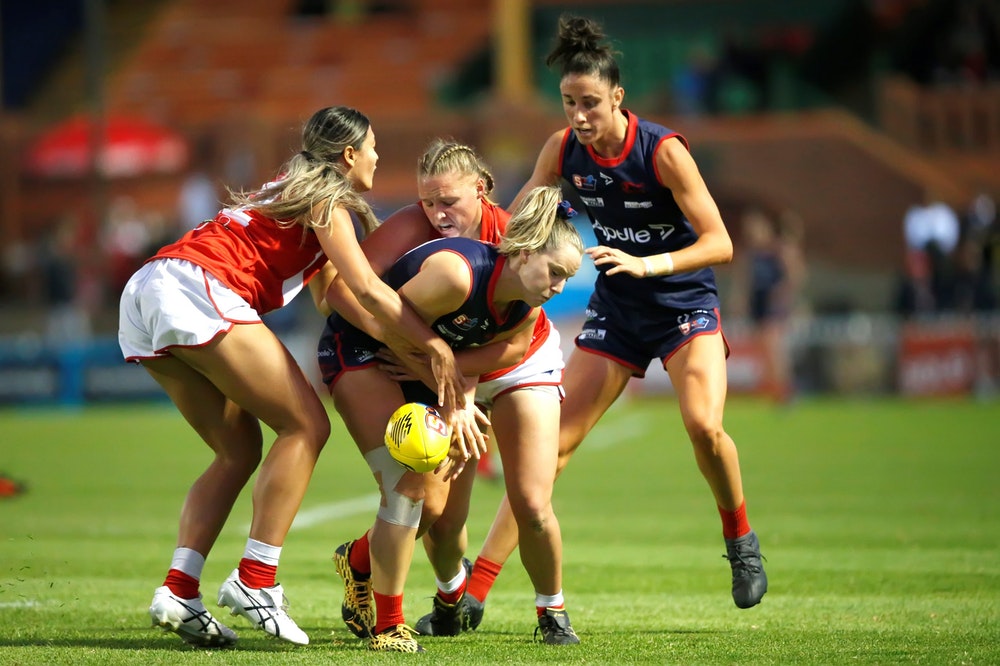 THE evenness of the South Australian National Football League (SANFL) Women’s competition was on display over the weekend, with the end result being seven of the eight teams separated by just two points – one win – while Norwood streaked away at the top of the table.

Norwood brought up the half dozen straight victories with a dominant 31-point victory over North Adelaide to solidify the Redlegs’ spot at the top of the table. The Redlegs kicked the only two goals of the first term, and kept the Roosters to just one goal for the match, booting the final four goals of the game during the 6.3 (39) to 1.2 (8) win. They dominated possession (215-156) and kept the ball off their opponents with a massive mark differential (46-17), also doubling the inside 50s count (32-16), and controlling the hitouts (37-17). The Roosters defence held up best it could with 25 rebound 50s to 14, and also laid 15 more tackles (69-54).

Glenelg has held on to bounce back with an important win against a fast-finishing Central District outfit that gave the Bays a real scare at ACH Group Stadium on Friday night. The home team booted the first two goals of the game and led by 13 points at the first break, before six consecutive behinds to the Bulldogs over the next quarter and a minute had them within seven points. Chantel Reynolds kicked the drought-breaking goal two minutes into the third term for the Bulldogs to claw to within one point, but the next five scoring shots – and three goals including two to Sarah Wilton  – went the way of Glenelg to open up a 35-13 lead. Looking down and out, the Bulldogs found a way to get back with three last quarter goals, but would ultimately fall three points short.

A momentum-swinging match has gone in the favour of the visitors, with South Adelaide triumphing over Woodville-West Torrens Eagles by just nine points at Maughan Thiem Kia Oval on Saturday morning. The teams traded goals in the opening half, with the only five scoring shots of the first half all being goals. The Eagles led by as much as 12 points early in the second term, but back-to-back goals by South had them a point up early in the third. The Eagles again responded to hit the front at the final break, but South kicked on in the last term to boot 2.2 to 0.0 and run out 5.3 (33) to 4.0 (24) winners. The teams were evenly matched with the Panthers ahead in the tackles (71-53), hitouts (23-17) and clearances (19-15), but most crucially the inside 50s (28-17), whilst the Eagles held firm in the back half with 21 rebound 50s to 13.

A seven goals to zero first half has set up a memorable victory for Sturt, piling on the Double Blues’ highest score with a huge 45-point win over West Adelaide to move within a win of the top four. The home team kept the Westies goalless until three minutes into the third term, where the visitors kicked two goals in the space of five minutes, and had the majority of their score within that time. But it was the seven straight goals to open proceedings – and that final two of the match – that secured Sturt its second win of the season. The Double Blues dominated possession, winning almost 100 more touches (217-138), had 19 more marks (47-28), and won the hitouts (26-18), clearances (21-18) and thrashed their opponents in the inside 50s count (27-12). West Adelaide did lay more tackles (53-38) and had four more rebound 50s (15-11) in a low-rebound game.