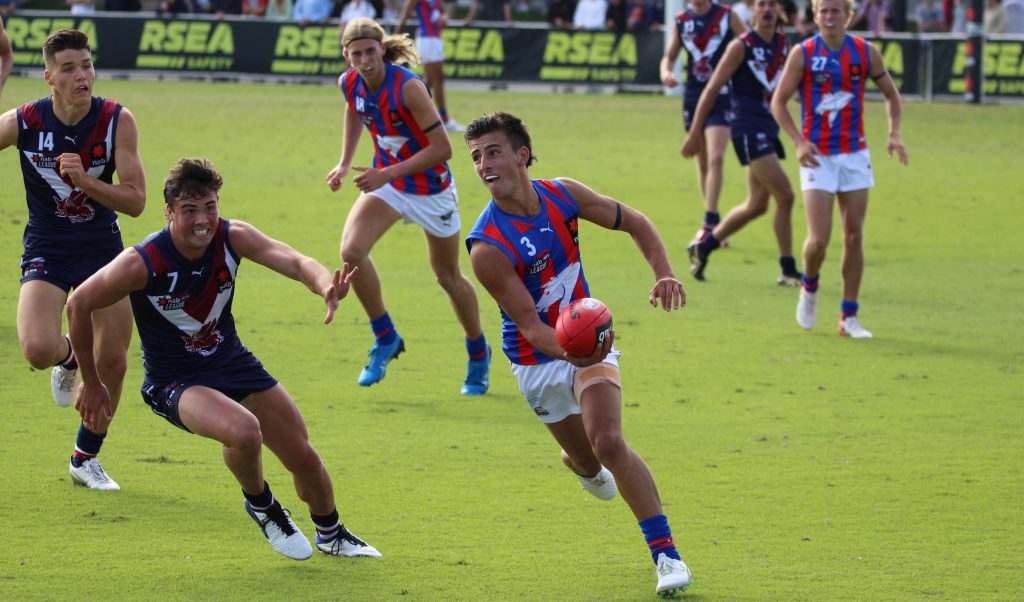 AFTER two close calls in the opening two rounds, Oakleigh Chargers’ Nick Daicos was easily the Draft Central NAB League Boys Player of the Week in the Round 3, amassing seven more disposals than any other player in the competition and being influential throughout the Chargers’ win over the Western Jets. Following 29 and 33-disposal efforts against Sandringham Dragons and Eastern Ranges respectively, Daicos had a whopping 40 disposals – the most since Matt Rowell in the 2019 NAB League Grand Final with 44 – and was simply unbelievable.

Daicos notched up not only 40 disposals, but took nine marks, had 11 inside 50s, two rebound 50s and booted two goals and four behinds, coming close to kicking yet another three goals as he has done in the first two rounds. In a third straight best on ground performance, Daicos looms as the favourite for pick one and is of course father-son eligible to Collingwood.

In the 2021 season, Daicos is averaging 34 disposals, 6.7 marks, 5.3 inside 50s, 2.7 rebound 50s, 4.0 tackles and 2.7 goals per game. He has helped lead Oakleigh to a solid start of two wins from three games, with the only blemish coming in that tight loss to Sandringham Dragons in Round 1. The 46-point victory over the Western Jets was the most impressive of the Chargers’ wins this season after defeating Eastern Ranges by a similar 42-point margin last week.

Oakleigh Chargers will hit the road when the NAB League Boys returns on Saturday, May 22 when they head up to Wangaratta to take on Murray Bushrangers in Round 4 of the competition.