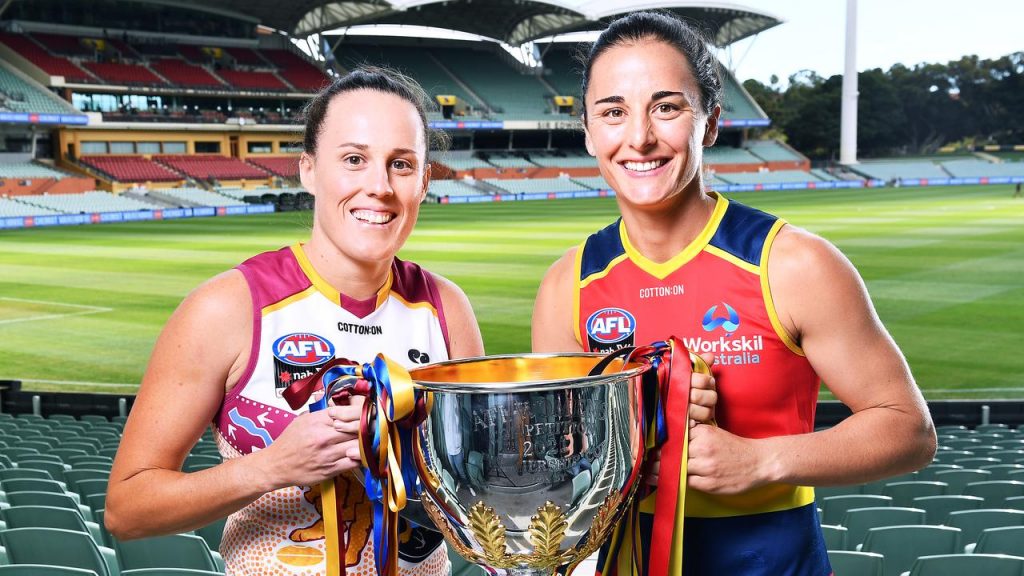 THE 2021 AFL Women’s season has come to a head, with the biggest match of the year set to play out between two of the AFLW greats. Following huge preliminary final victories last week – one a blowout margin and one a hard-fought contest – there is no doubt the two best sides enter the big dance, with everything to play for and not just bragging rights, but also history on the line.

In a matchup we have seen plenty of times, it’s only fitting that the two best teams of the AFLW era face off in today’s decider. The top two teams on the ladder, the Crows and the Lions first faced off in the 2017 grand final, with Adelaide victorious by six points, dishing out heartbreak to Lions players, staff and fans.

Since then, a lot has changed for both sides, but a rivalry has emerged, and classic matches have been born from this. The Lions have remained in contention in the coming years, suffering a second six-point grand final loss in as many years. The Crows stumbled in 2018, but found themselves premiers again as they smashed Carlton by 45 points in the 2019 grand final. The 2020 season was scrapped, meaning at least one of these two teams has featured in every AFLW grand final. It is almost destiny that the streak continues into 2021. To top it off, Lion Lauren Arnell will play for a flag in her final outing at the end of a strong career. Could a fairytale be on the cards?

Both finishing with eight wins (seven in the home and away season) and two losses, a percentage lead gave Adelaide the crucial home ground advantage in today’s game. Adelaide went 6-1 at Adelaide Oval this year, while the Lions went 5-1 at the Gabba. Both grounds are very different in both dimensions and atmosphere, so Adelaide have already gained an important boost. When these two teams faced off, Crows superstar Erin Phillips arguably won the game off her own boot for her side. She slotted four goals for the match – including the sealer in the final minute of the game – as Adelaide escaped with a 12-point win. Phillips has been one of the game’s best players since its inception and could prove to be a match-winner on the biggest stage of all. Expect Brisbane to put plenty of work into ensuring this doesn’t happen again.

There are key players all over the ground, with plenty of stars sure to attract attention from the opposition. Starting with the Crows, Phillips is clearly priority number one for Brisbane to negate, with her ability to tear a game open in a matter of minutes demonstrated in the previous matchup. Her talent both in the midfield and up forward makes it tough for Brisbane to settle on a hard one-on-one tag. The Lions will certainly have their hands full stopping the league’s first superstar. There is also Eb Marinoff, a midfield star in her own right. She put her stamp on the preliminary final, finishing with 35 disposals and 12 tackles, constantly tormenting opponents with her clinical work around the stoppages. The Crows midfield will be hard to stop, but the Lions can do it, and they have stars of their own. Midfielders Emily Bates and Isabelle Dawes will almost certainly have a say on Saturday’s result. The Crows will also have to be aware of Kate Lutkins and her ability to create from the back half. She is crucial to the team’s style of play and will be looking to deliver on the big stage as she has in the past, whilst Dakota Davidson and Courtney Hodder are critical cogs. Heartbreakingly, Chelsea Randall has been ruled out of a comeback for the Crows per the AFL’s strict 12-day concussion guidelines after sustaining a match-ending head-knock last week.

It’s a rivalry four years in the making, and one that has enthralled viewers all across the nation. The two best teams of the AFLW at the top of their respective games has the potential to be a classic in the making. No one knows who will be holding the cup later this afternoon, but the one certainty is that all eyes will be on Adelaide Oval.