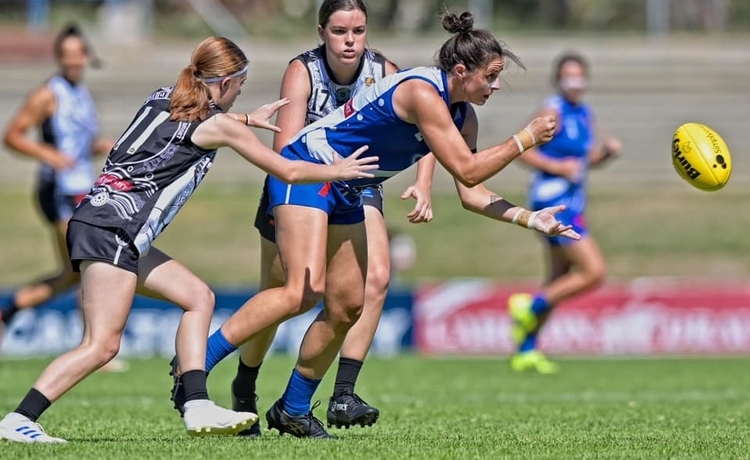 A CLEAR divide has developed in the West Australian Football League (WAFL) Women’s competition, as the top three sides – led by the undefeated Swan Districts – are at least 12 points clear of the bottom three sides. The Swans have not dropped a game in seven outings and sit pretty eight points clear at the top of the ladder, with a massive percentage of 263.7. Peel Thunder and Claremont are separated by less than six per cent thanks to five wins from seven matches, before East Fremantle and Subiaco appear to be fighting it out for the last finals spot. The Sharks have the superior percentage – by 9.67 per cent, while South Fremantle hold up the table as the only side yet to win a game in 2021.

The opening game of the round sees reigning premiers Peel Thunder hitting the road to take on reigning wooden spooner and a side yet to register a win in the club’s short history, in South Fremantle. The Thunder will welcome back Demi Liddle who slots straight into the midfield group alongside Chloe Rigley, Gracie Fenton and Ebony Bilcich. The loss of the likes of Courtney Rowley, Jaide Britton and Ella Roberts to the State Academy has not impacted the Thunder, and they are expected to get the job done here with the damaging forward line of Kira Phillips, Bailey Molloy and Kate Bartlett all able to hit the scoreboard, and Tanisha Anderson, Ebony Dowson and Cassie Davidson at the back.

The Bulldogs on the other hand have a steady midfield group of Tahlia Holtze, Lauren Vecchio and Liudsaidh Gilchrist, though will be missing the likes of Makaela Tuhakaraina, Ash Reidy and Lauren Wakfer from the side who will return next week from their State Academy duties. Pia Durk, Kiara Templeman and Zoe Huggett are important components of the side, with Hunter Cronin and Aaliyah Ugle others to keep an eye on forward of centre for the league’s cellar dwellers.

Just when it looked like Swan Districts could not get any stronger without its contingent of youth stars, the Swans have brought back the Hyde twins, with Mikayla and Brianna Hyde both in the team. Mikayla has already played this season at state level, but is expected to feature more heavily now Fremantle’s AFL Women’s campaign is over. Brianna on the other hand was co-captain of the State Academy squad, but fell a week short of recovering from injury to play, and will look to have an impact in this game. Chanel Jetta will join the likes of AFL Women’s listed talents Kellie Gibson and Imahra Cameron back into the side. They also have the in-form Jess Cox, along with fellow youngsters Jaime Henry, Kloe Taylor and Danielle Wright, while Emily McGuire has been named at full-forward in a change of ends.

Subiaco have not opted to name any outs just yet, with Ellie Blackmore an important inclusion back in the side on a wing, whilst Taylisha Brown, Maud-Annie Foley and Dahna Lee have all been added to the extended interchange. Jess Ritchie, Tarnica Golisano, Lara Filocamo and Abbey Dowrick are a strong midfield group, as Claire Ortlepp and Jayme Harken provide the defensive impact, and youngsters Kia Buckley and Jamie Rust will benefit once again alongside Tarnee Tester at half-forward. The Swans will be strong favourites to go 8-0, but Subiaco are forming a more solid team to attack the second half of the year.

In the final game of the round, East Fremantle will look to cause an upset against Claremont with both teams making some changes at the selection table. The Tigers have welcomed back AFL Women’s listed Eagles, Hayley Bullas and Sophie McDonald, alongside Adele Arnup, Ayesha Razvi and Mackenzie Thompson, with Melissa Mettam, Emily Pickett and Julia Uhe coming out but remaining at emergencies. Bullas will team up with Sasha Goranova and Jess Low in the midfield which will cause some headaches for the sharks, whilst McDonald will join forces with consistent defenders, Rachel Ortlepp and Amy Fortescue in the back half.

East Fremantle welcome back Kahra Sprylan into that midfield mix, as well as full-forward Stephanie Dalton who replaces Sara Lewis, defender Rachel Ashley, and then Doma Fedele and youngster Gabby Radojkovich coming onto the bench. Alli Nokes, Samara Pluschke and Torrens Revell were among the outs for the home team ahead of the clash. Rosie Walsh remains at full-back for the Sharks, with Hayley O’Donnell, Ashleigh Gomes and Madeline Ross creating some run on the outside, and clever Larissa Versaci up forward. Sharon Wong and Kate Inglis-Hodge will look to take control with Sprylan in a massive midfield battle against the equally-talented Tigers onball brigade.