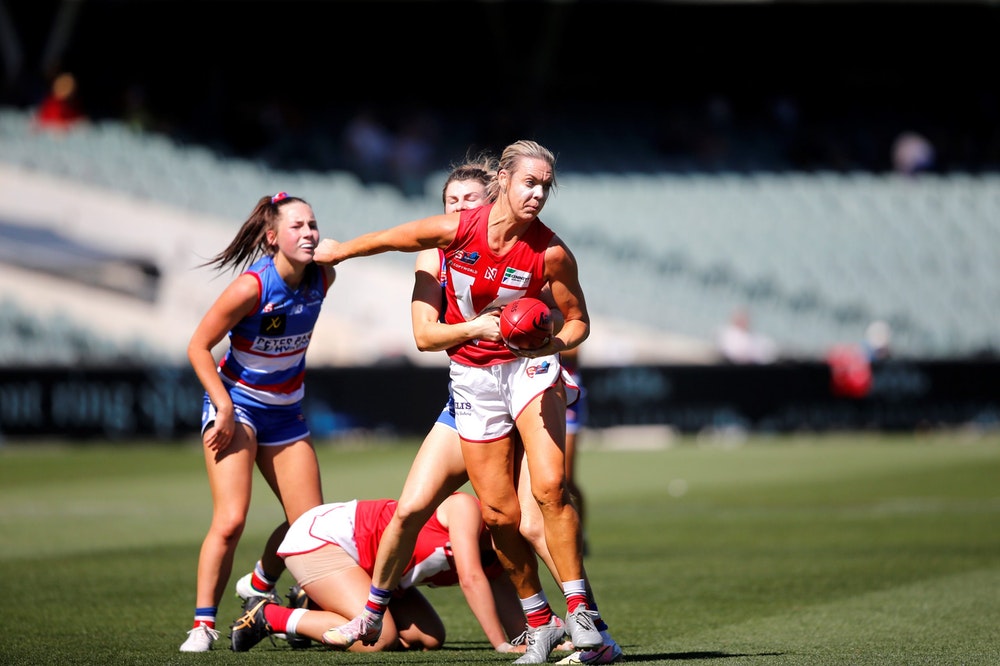 FIVE rounds remain in the South Australian National Football League (SANFL) Women’s competition, with the sides still without the majority of the State Academy members and AFL Women’s talent given the week’s 2021 AFL Women’s Under 19 Championships, and the fact that Adelaide is one win away from another elite level premiership.

Norwood will of course be without its two State Academy representatives in Melbourne, with Alana Lishmund and Jade Halfpenny out of the side, along with Mattea Breed and Shai Hiscock, for another huge clash against North Adelaide. The Redlegs managed to topple the then-undefeated Roosters after a 15-game winning streak from the reigning premiers, and will be looking for much of the say once again, with another State Academy member in Jess Williams coming in, alongside ex-Rooster Gabrielle Gormlie. North Adelaide will be without Amelie Borg, Kate Case, Lauren Daniel, Jorja Eldridge and Julia Clark for State Representatives duties for South Australia, while Elaine Grigg ran out for the Medleys. The Roosters will be further understrength without Lauren Daniel (unavailable) and Cristie Castle (ankle) making it a total of seven forced changes. Coming into the side are a couple of AFL Women’s talents in Rhiannon Metcalfe and West Coast’s Katelyn Pope who returns from the elite level following the end of the Eagles’ season. Remy Grant is also set to make her debut coming from SMOSH West Lakes. Expect Norwood to be the favourites given the Roosters outs, though they still have a strong spine which includes Talia Radan, Kristi Harvey and Kelly Barltrop and cannot be underrated, though Leah Cutting and youngsters Sarah Branford and Tesharna Maher are exciting talents.

Central District will travel to face Glenelg in the other clash tonight, with the three forced changes due to State Academy representation in Laitiah Huynh, Lauren Breguet and Madison Lane. Into the team comes the experienced Nicole Mark, along with Ella Mickan, Aisha Thomas and Emma Keys. They will look to build on their massive win over North Adelaide prior to the weekend off, and will look to take advantage of a heavily understrength Glenelg outfit. The Bays will be missing Brooke Tonon and Tamsyn Morriss after their State Academy duties, but will also be without Piper Window, Emma Swanson, Kimberley Fry, Ellen Fauser and Molly Affolter in a raft of seven forced changes. Among those Bays named returning to the side are Anja Bancevic, Sarah Goodwin, Taylah Scapens and Sarah Wilton who have all made their way into the starting 18. The Bays will look to the consistency of Ellie Kellock, Jessica Bates and Sam Franson in order to overcome a strong Central outfit which includes a potent forward line of Katelyn Rosenzweig and Chantel Reynolds, as well as a consistent hard midfield of Shelby Smith, Lauren Smith and Caitlen Teague, and a defence that backs itself on transition. The Bulldogs will look to rack up another win here, in what will be an important game before AFL Women’s talents start filtering back into the league.

Both Woodville-West Torrens Eagles and South Adelaide will be missing some incredible talent in Round 7, as the sides make a combined 14 changes for the must-win clash for both sides. The Eagles will look to bounce back after the loss to Norwood last week following their three-game winning streak, whilst the Panthers will eye off getting their season back on track in the second half of the 2021 competition. The Eagles will host the game, but will be without AFL Women’s listed players in Jess Sedunary and Renee Forth, whilst young guns Charlotte Dolan and Jamie Parish, and the injured Kiley Green will all be unavailable. Coming into the side are three potential Eagles debutants in Samantha Hoogeveen-Hill, Cheryllee Waters and Nikita McRostie, alongside players such as Georgia Taylor and Mikayla Cavallaro. The Panthers have an exodus out of the team due to a mixture of reasons, as Hannah Muunyard, Lisa Whiteley and Montana McKinnon are all out for Crows duties, while Gypsy Schirmer, Tahlita Buethke and Lauren Clifton miss due to the State Academy, and Jess Kirk is among more outs. The Panthers have named 11 inclusions to an extended bench, with both Renee and Soriah Moon, Amy Gore and Emily Brockhurst among those ins. They still have a strong midfield in Czenya Cavouras, Nicole Campbell and youngster Sarah Wright, but will be up against it taking on an Eagles side whose youth has stepped up this year, such as Shineah Goody and Astrid Gooley.

West Adelaide have welcomed a massive inclusion for the remainder of the season in Richmond AFL Women’s player Sarah Dargan who has come straight in to make her SANFL Women’s debut. Her much needed experience – alongside some other debutants in Jess Chyer, Beth Sigley and Grace McNicol will be much welcomed by the Bloods who will be without a ton of top-end talent. AFLW-listed Ailish Considine, Madison Newman and Chelsea Biddell will miss the game, as well the State Academy members of Keeley Kustermann, Zoe Venning and Lauren Young, with Olivia Smith, Zoe Greer and Melanie Elsegood also forced changes for Round 7. For Sturt, the Double Blues they have the four straight forced chances with the quartet of State Academy members including co-captains Hannah Prenzler and Georgia Swan, as well as Alex Ballard and Zoe Prowse. Sarah Wallace will make her debut in the side, with Sarah Wallace coming straight into the forward line. She is joined by an extended bench that also includes Kiera Mueller, Aajiah Jericho and Casey Fraser, whilst the in-form midfield of Jess Good, Alisha Gepp, Jaimee Wittervan and Isobel Kuiper remains intact. They will provide stiff opposition for the Westies, who will look to the likes of Sharnie Whiting, Kasia Culhane and Louella McCarthy for experience, with Dargan having a huge role in the midfield.