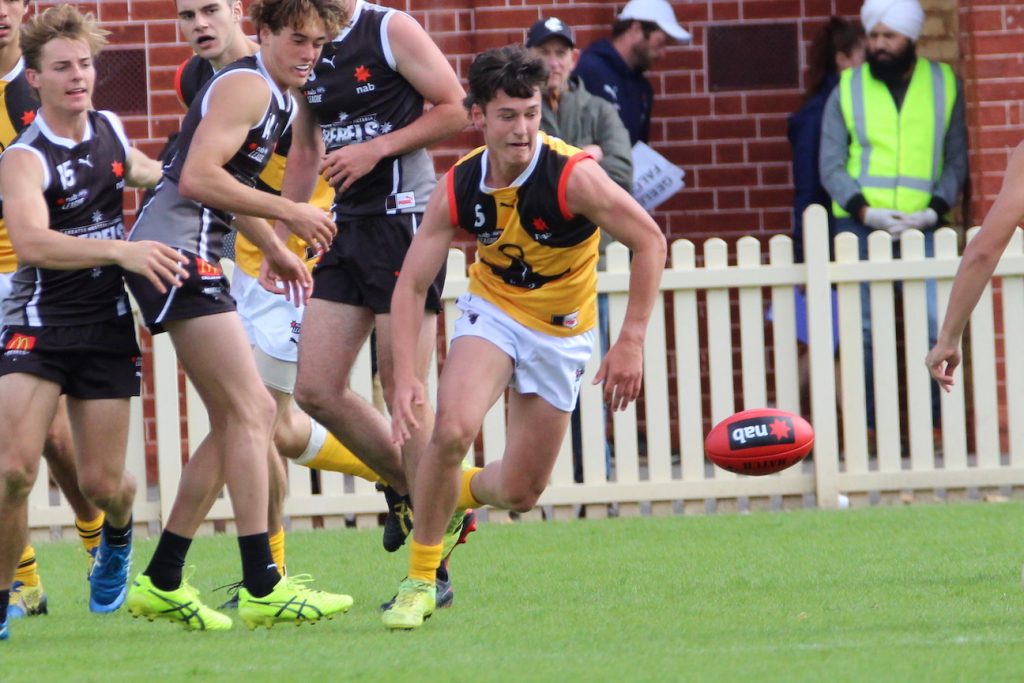 AFTER a couple of all-country clashes, Dandenong Stingrays sit 1-1 heading into the third full round of NAB League action. Although they did not get the four points last time out, a bunch of budding AFL Draft prospects proved one thing – that the ‘Rays may well be on the rise in that capacity.

The typically strong talent region saw only one player selected in the most recent draft intake, as Deakyn Smith landed at Melbourne through the pre-season supplemental selection period. That was after a handful of Dandenong products made it to the elite level in 2019, but it seems at this early stage that the Stingrays may have another few prospects set to make a name for themselves this year.

Round 2 Player of the Week, Connor Macdonald returned a dream performance in the Stingrays’ loss to Greater Western Victoria (GWV); amassing 33 disposals, 10 marks, 10 inside 50s, and laying 12 tackles. A monster effort. It saw the 184cm midfielder rise up draft boards, especially having backed up a strong Round 1 showing.

His speed away from congestion is complemented well by a desire to work hard, as Macdonald could be seen accumulating possessions in all areas of the ground and lifting when his side needed it. Having played on a wing and up forward, Macdonald also has the ability to kick goals and really hurt the opposition with his balanced game.

There are a raft of other names to keep an eye on as they raise their stocks throughout this year’s campaign. Miller Bergman is a versatile type with eye-catching traits. He started at half-back in Round 2 before moving forward to boot three final-term goals, showcasing impressive aerial ability and some real class on the ball at both ends.

James Cahill, the brother of Essendon’s Ned, is another coming through the ranks. The crafty forward shares many traits with his elder sibling, able to play slightly above his size and hit up hard at the ball to mark. He also boasts the obvious ground level craft with clean hands, great smarts, and a real nose for goal. Watch for his rise.

Joining him up forward are livewires Judson Clarke and Josiah Kyle. The former does not need much room or many touches to make an impact inside 50, and the same can be said for the latter. Kyle is also a St Kilda Next Generation Academy prospect, while the speedy Kobi George, Ryan Koo Kwet Kim, and Mac Andrew qualify for Melbourne.

Andrew has raised eyebrows of late as a raw ruck talent with genuine top 25 potential. His athleticism makes for exciting work at each contest, and he also has a good knack for taking marks around the ground – whether it be while dropping back in support or in his time resting forward. At the contest, he also follows up well and while his decision making can do with refining at times, he does well when performing the fundamentals.

Another tall of note is Justin Davies, difficult to miss with his red hair. He showed as an Under 16 prospect that he is capable of playing as a forward, but looks to have swung up the other end of late and played a key role against GWV as he shut down the dangerous Josh Rentsch.

Of course, it would be remiss not to mention a couple of 19th-year prospects who have also lived up to their billings. Will Bravo returned with aplomb last week on the wing and through midfield, making use of his experience with the Hawthorn AFL side during preseason. Utility Clayton Gay has also started strongly, a terrific natural footballer.

Having shown vast development on each line, this emerging Dandenong side will face one of the toughest NAB League tests in Round 3, against Sandringham Dragons. The two sides meet on Saturday afternoon at Trevor Barker Oval, with the 2-0 Dragons boasting a heap of high-end draft prospects.

Tune in to the contest via the NAB League app, where our very own Draft Editor Michael Alvaro, and analyst Declan Reeve will be providing commentary. With so much talent set to take the field, it looms as one of the games of the round.