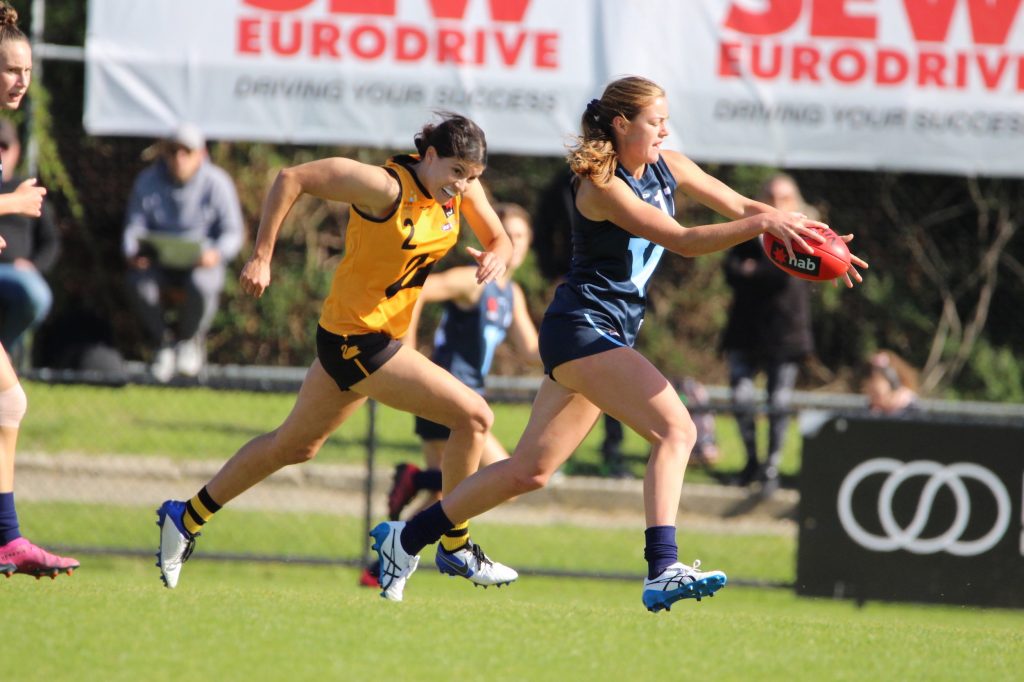 VIC Metro survived a dramatic late fightback from Western Australia on Thursday morning, holding on to win by four points at Trevor Barker Oval after Chloe Reilly‘s post-siren set shot drifted wide in the Sandringham wind. The Big V led from the first goal and were in the box seat to coast to a straightforward victory, until WA turned up the heat in a dramatic last-ditch lunge.

Over two goals down heading into the final break and throughout much of the fourth quarter, the Black Ducks were at long odds to sneak ahead, but made a real fist of it as Amy Franklin and Ella Roberts got them back to within a goal. Metro looked to have the result locked up as Tahlia Gillard held the ball inside Metro’s defensive 50 with 30 seconds left, but a miscued kick across goal sent players into a scramble, as the second-last kick of the game landed in Reilly’s lap.

While her resultant shot went wide, the West Australians got around their number 25 and could be proud of the effort they showed to play out the game to the death. In the end, Metro’s win was perhaps the deserved result for their effort across the first three terms, though it was very nearly snatched from them. Either way, inaccuracy reigned amid heavy wind in the 4.13 (37) to 4.9 (33) result.

West Australian bottom-ager and MVP, Roberts was clearly the best afield in a losing effort; collecting a game-high 31 disposals, five marks, six inside 50s, and booting two goals. Her teammate Courtney Rowley dug in for 23 touches (18 handballs) and seven clearances through midfield, and Reilly had 15 touches. Lauren Wakfer did some good work in the ruck, and the spark of Makaela Tuhakaraina was eye-catching.

The result sees Metro earn its first win of the carnival, while Western Australia has its one victory over the Allies in the bag. The Vics will go on to play Queensland, while the Black Ducks’ championships come to an end after wonderfully competitive outings.