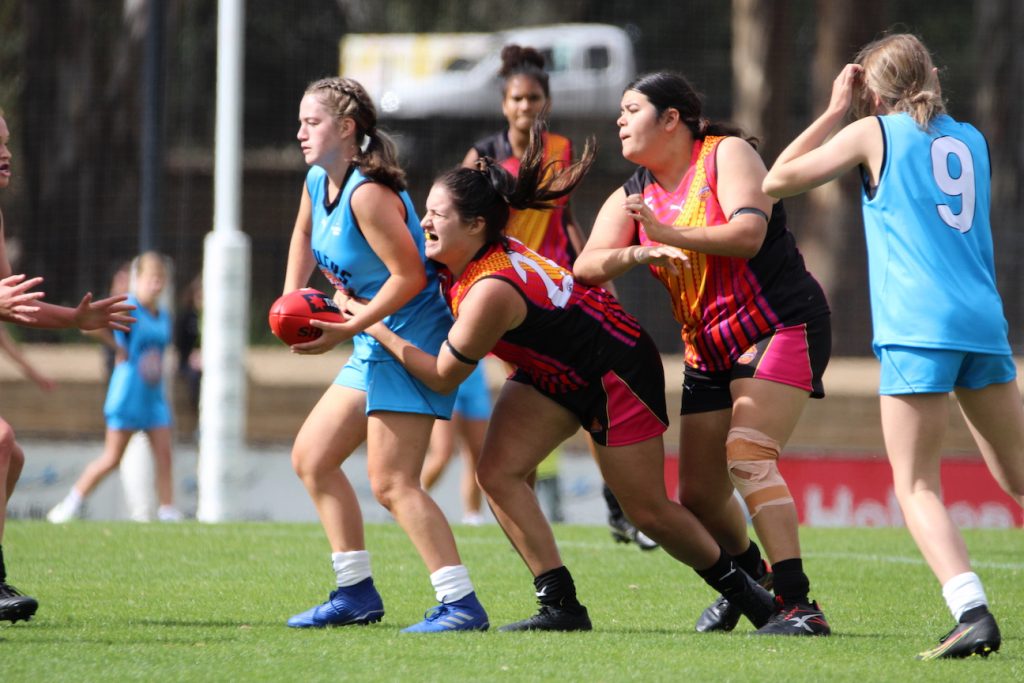 THE MEDLEYS have secured a narrow one-point win against a fast-finishing Woomeras in the second game of the exhibition clashes as part of the 2021 AFL Women’s Under 19 Championships, to square the ledger in their two-match series. After the Woomeras got up by eight points in the first encounter on Monday afternoon in Werribee, the Medleys got up 4.4 (28) to 3.9 (27) in a tight encounter at Trevor Barker Oval.

The work was all done in the first quarter, with the Medleys piling on three goals, including two in the first six minutes to race out to a 13-point advantage. Athena Mendoza and Zoe Bohacik were the beneficiaries of those early goals, before Bendigo Pioneers’ listed Jemmika Douglas hit back with a major of her own. She was lively throughout the game, applying great defensive pressure and kicking a couple of behinds as well. A late goal to Elisha Lane put the Medleys back up by 13 after the Woomeras had cut the deficit to as little as six during the first term.

The second term was a nail-bitter as three consecutive behinds to the Woomeras cut the deficit back to 10 points, only for Mendoza to drive the dagger in with a goal on the Medleys first scoring chance. She added another behind before the half-time siren, and the Medleys were out to a 17-point half-time advantage. The weather conditions were proving challenging however, as Woomeras kicked four behinds but could not put one through the big sticks.

They had cut the deficit back to 13 points and had the momentum, which they took into the final term. Kyanne Campbell had a chance in the opening minute of the last quarter but missed to make it a square 12 points, before Montanah Bevis cut it to a straight kick with a conversion two minutes later. An important – or what one would call match-winning – behind occurred when Mikah Munn made it a seven-point differential for the visitors. As neither side could gain any serious scoreboard advantage over the next seven and a half minutes, it took until Tamashya Blurton finally lifted the intensity with a crucial goal and the deficit was back to one point.

Unfortunately for the Woomeras, despite dominating the second half, they could not quite get over the line, with the Medleys sole behind of the half enough to be the difference in the end. It was a spirited effort from the Woomeras, who booted the last two goals of the contest, but will rue the eight straight behinds from the start of the second term through to the opening minute of the fourth term, that could have given them a comfortable win. Nonetheless it was a cracking tight contest, symbolic of the rest of the day’s action.

Ammie Vamah a talented 2005-born player from New South Wales was the main ball-winner in the match with 25 disposals, three marks, six tackles, five clearances, four inside 50s and three rebound 50s. Ella Tyson (19 disposals, two tackles, three inside 50s and three rebound 50s) and Elaine Grigg (19 disposals, two marks, four tackles and six inside 50s) were also prominent. Lane had 17 touches and four rebounds to go with her goal, while Tunisha Kikoak was relieving in defence with seven rebounds from her 16 disposals.