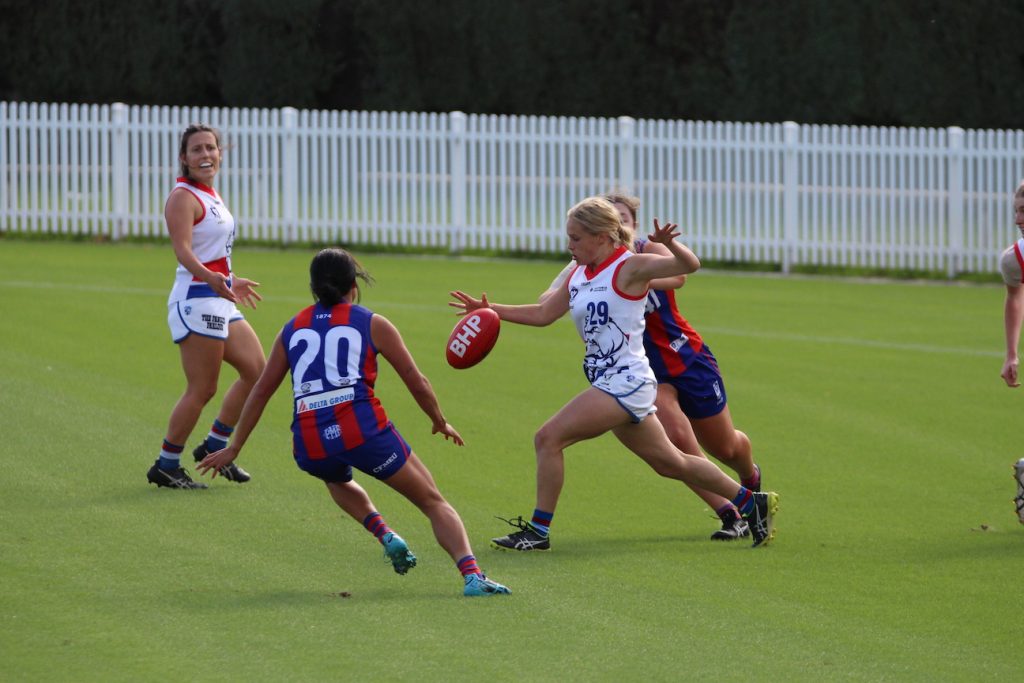 A HEAP of young prospects are now filtering through the Victorian Football League (VFL) Women’s competition, with the revamped structure allowing Under 18 and 19 NAB League players to align with state league sides as both seasons run concurrently. Round 6 saw plenty of talent scattered across each side, and we take a look at how VFLW-listed players who currently play in or have graduated from the NAB League, performed.

Essendon welcomed a couple of fresh faces to the fold as it trumped fellow standalone side, Hawthorn by 14 points on Saturday morning, The Bombers called upon current Calder Cannons guns Kasey Lennox (defender) and Zali Friswell (midfielder), who enjoyed solid runs in their debuts. They ran out alongside former Cannons Alana Barba and Grace Dicker, the former of whom has established a key role in the team.

Hawthorn also had a NAB League product make her debut, in Eastern prospect Ruby O’Dwyer. She was one of three current Ranges to run out in the brown and gold, with Jess Grace and Isabelle Khoury returning for their second games at the level. Khoury, a likely type up forward, was named among the Hawks’ best players.

The Southern Saints notched their third win of the season, also on Saturday morning, as they defeated Williamstown by 10 points on home turf. Gabby De Angelis booted two goals in the winning effort, while Ruby Tripodi claimed full votes for the Seagulls as she continues her stellar season. Promising forward Tahlia Merrett also returned after nearly a month out.

Despite another heavy loss, the Western Bulldogs continue to present strong opportunities to their young players, headlined this week by Molly Denahy Maloney. The tall was named best afield for the Dogs in their loss to Port Melbourne, while debutant Lilli Condon proved lively at ground level and Nikita Wright returned to the fold. Former Bendigo Pioneers skipper Brooke Hards fared well in a new role, trialled in defence and matching up on Borough first-gamer, Taylah Morton.

Elsewhere, Bridie Winbanks featured in the votes for Casey as the Demons went down by two points to a Geelong side boasting the likes of Tamara Smith and Paige Sheppard. Collingwood remains undefeated after keeping Carlton goalless on Sunday, with Olivia Meagher getting an extended run while Amber Micallef and Marnie Jarvis ply their trade in navy blue. Ciara Fitzgerald again found the goals as North Melbourne went down to Darebin, in the Falcons’ first win for the season.