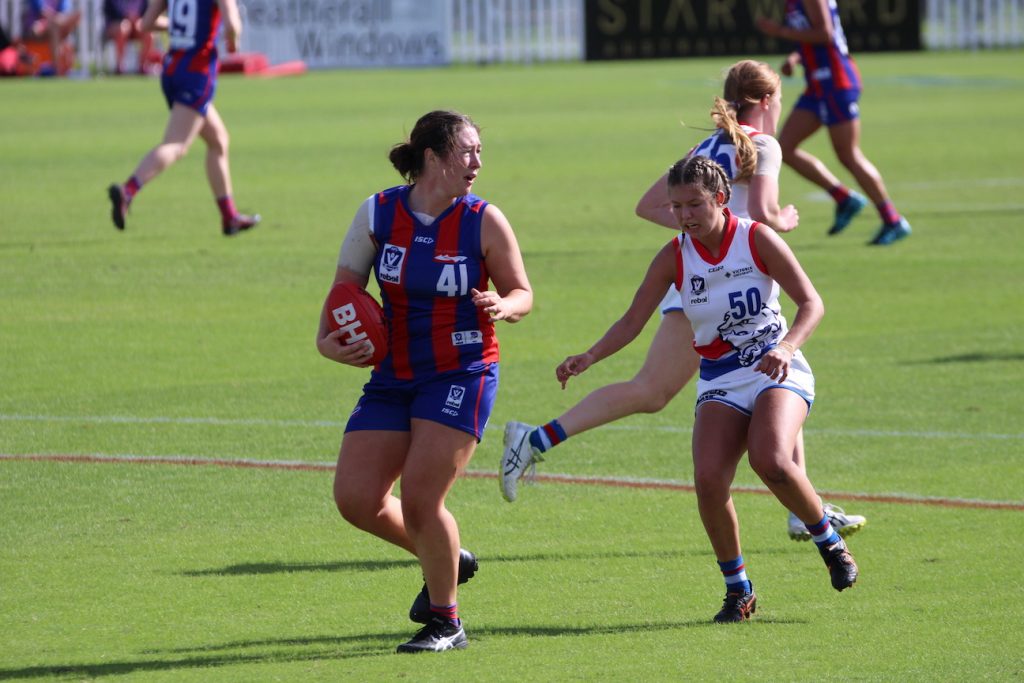 THE Victorian Football League (VFL) Women’s returned for Round 6 on the weekend, with five fixtures played on a super Saturday, and one on Sunday. As the season runs concurrently alongside that of the AFLW, senior-listed players from Victorian clubs who miss out on senior selection will be able to run out for what are effectively reserve sides in the VFLW. As no Victorian teams remain in the top flight finals hunt, state league sides will now be able to load up on elite level talent.

A pair of recently-delisted Saints swapped red, white and black for brown and gold in a battle between standalone clubs, as Hawthorn took on Essendon. The players in question, Nadia Von Bertouch and Tamara Luke, both featured in the Hawks’ votes having notched 10 disposals each, but could not quite help their new side to a win.

Their old VFLW team, the Southern Saints had a win over Williamstown in the same Saturday morning timeslot, after stocking up well on top level players. Jacqui Vogt was named best afield for her 17 disposals and 11 tackles, while Alice Burke fared well in the engine room with 15 touches, and Molly McDonald found it 12 times for the victors.

Port Melbourne’s unblemished record remained so after the Borough beat Western Bulldogs comfortably. Sabrina Frederick booted two goals in her first VFLW outing this year, while Sarah Sansonetti was prominent with five marks down back and recently-delisted forward Emily Harley (16 disposals, one goal) was named her side’s best player.

For the Bulldogs, Annabel Scott gathered a team-high 20 touches and was supported well by young duo, Isabelle Pritchard and Isabella Grant. The latter two have swung between senior and reserves level this year, gaining valuable experience against senior bodies among the young Bulldogs squad.

Geelong held on to beat a fast-finishing Casey Demons on Saturday, with a bunch of top flight products proving impactful. A quartet of senior Cats kicked goals, in Darcy Moloney, Carly Remmos, Laura Gardiner, and Georgia Clarke, while Georgie Rankin gathered 18 disposals. Gardiner also laid 13 tackles and Moloney had 16 touches in the win.

North Melbourne was defeated by Darebin, but that did not stop Katelyn Cox from continuing her good form with 19 disposals and seven tackles. In Collingwood’s victory over traditional rival Carlton, Amelia Velardo thrived with a team-high 20 touches, as Maddy Guerin led all comers to notch a game-high 27 disposals.