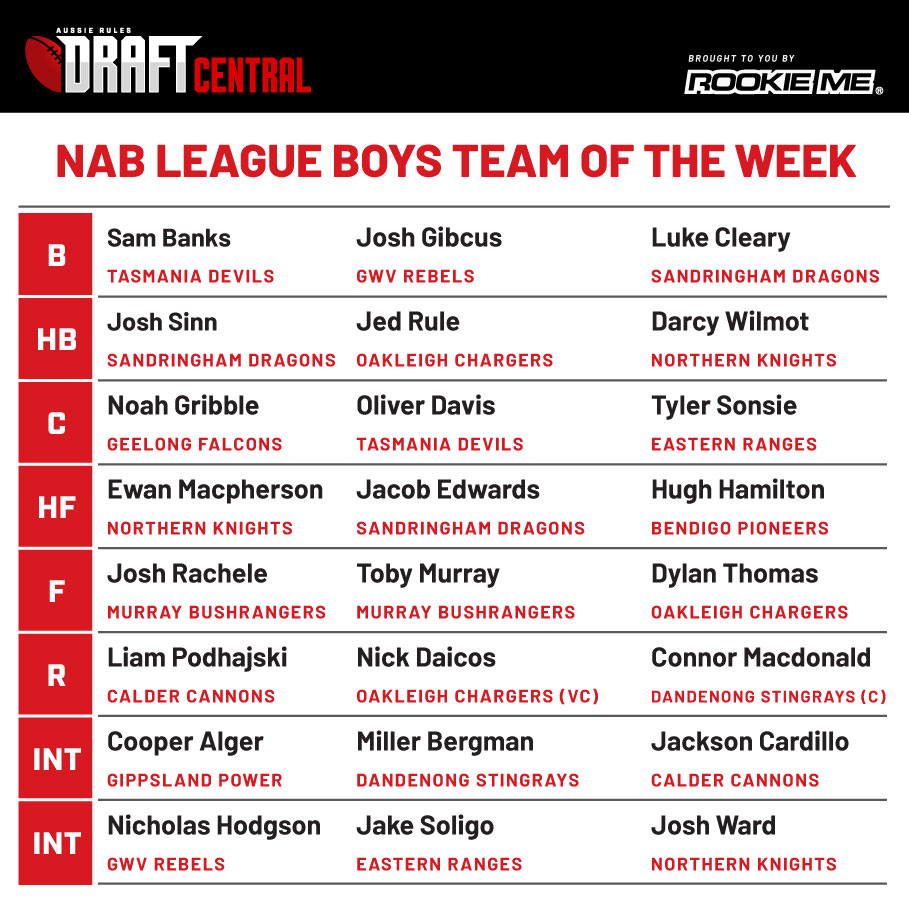 THREE sides have earned a trio of players in our Draft Central NAB League Boys Team of the Week for Round 2. Winners Oakleigh Chargers and Sandringham Dragons, as well as narrow losers Northern Knights, have all earned players in our team for the second round. Most sides had two representatives, with Bendigo Pioneers and Gippsland Power combining just the two players from their game in an even overall performance, while Geelong Falcons also had just the one player for Round 2.

Oakleigh Chargers were again led by Nick Daicos who booted another three goals from 30 touches to be named vice-captain of the side, joined in the team by centre half-back Jed Rule, and forward Dylan Thomas. They defeated Eastern Ranges who had the two representatives, with Daicos’ co-captain from last week Tyler Sonsie in the team again, with Jake Soligo also make the 24-player squad. On the other wing to Sonsie was the sole Falcons’ representative Noah Gribble who had the ball on a string despite his team’s loss to Murray Bushrangers.

Sandringham Dragons and Northern Knights produced the match of the round with a tight contest at a wet and windy Preston City Oval, and six players from that game made the side. The Dragons’ Josh Sinn and Luke Cleary are named in the back six, with Jacob Edwards at centre half-forward and could relieve in the ruck. Northern had Darcy Wilmot named at half-back, while Ewan Macpherson (half-forward) and Josh Ward (interchange) also made the side. The reason Edwards could slide to half-forward was the dominance of Calder Cannons’ ruck Liam Podhajski who was named starting ruck in the side, while Jackson Cardillo made the bench.

Despite losing to the Cannons by a point, the Devils had a couple of familiar names in the team with Oliver Davis and Sam Banks kicking off their NAB League Boys seasons in style and rewarded with starting spots in the side. Rounding out the stacked midfield is Dandenong Stingrays’ Connor Macdonald who won the Draft Central Player of the Week for Round 2 and will captain the hypothetical side. Miller Bergman also made the team after an impressive performance in the Stingrays’ loss to the Greater Western Victoria (GWV) Rebels.

Speaking of the Rebels, they had the two players in the team as well, with Josh Gibcus back in the team locking down full-back, while Nicholas Hodgson was named on the interchange. The other players in this week’s team all featured in the Sunday triple header, as Murray Bushrangers’ big win over Geelong Falcons saw forwards Toby Murray and Josh Rachele named in the forward line, while Bendigo Pioneers’ Hugh Hamilton and Gippsland Power’s Cooper Alger also earned their spot as their team’s sole representatives. This week’s emergencies are Murray Bushrangers’ Charlie Byrne, Calder Cannons’ Flynn Lakey and Eastern Ranges’ Tom Taylor who all had impressive performances in their respective thirds.

DRAFT CENTRAL NAB LEAGUE BOYS TEAM OF THE WEEK: ROUND 2