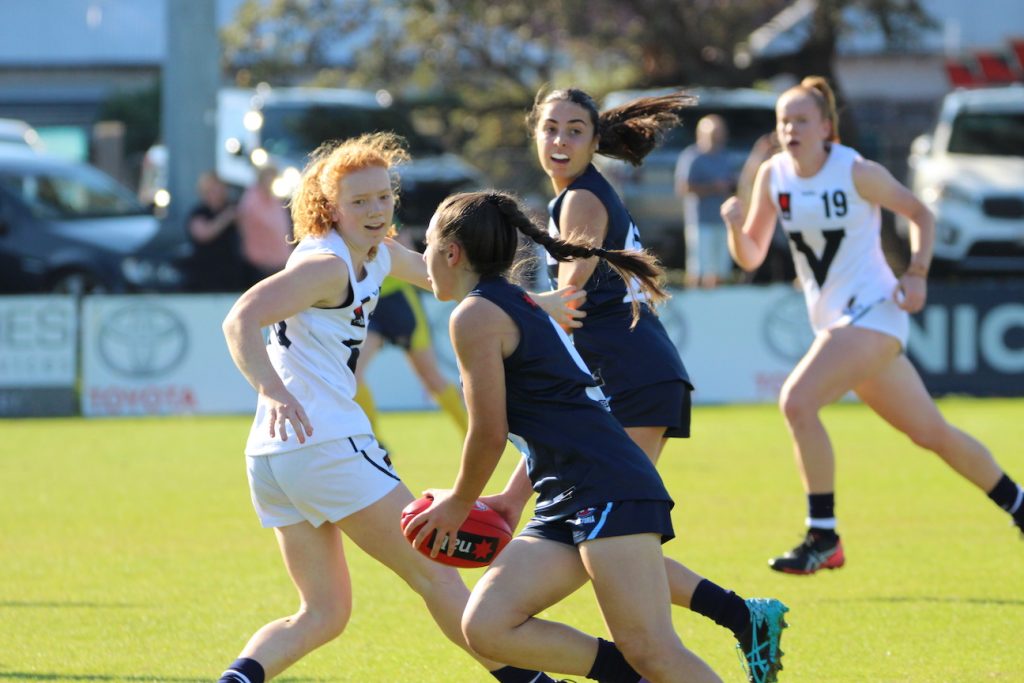 VIC METRO have made it two from two in the AFL Women’s Under 17s Championships, with an impressive 11-point win against their Country counterparts at Warrawee Park on Tuesday afternoon, with the final scores being 5.3 (33) to 3.4 (22). Despite the loss, Country looked much improved from their showing on Good Friday, with the return of Under 19s squad members Octavia Di Donato and Mackenzie Eardley shoring them up in defense. Metro were without three of their best from the previous clash, with Charlotte Baskaran, Sofia Hurley  and Bridie Hipwell not taking part as they prepare for their debut performance for Vic Metro 19s against Western Australia on Thursday.

With three of their main midfielders out, the Metro starting midfield looked a lot different to what they did in the last match, with two 2023 draft eligible talents in Ava Jordan of the Northern Knights and Alyssia Pisano (Eastern Ranges) moving in to fill the gap, along with Brooke Plummer, a teammate of Jordan’s at the Knights.

Unsurprisingly, the first quarter was an arm wrestle for control from each side, neither team having control for very long. No one managed to get a goal, with the defensive efforts of both sides extremely good, swarming on any defensive 50 entry to create an outnumber and force it out, Metro’s Mia Busch and Abbey McDonald along with Country’s Grace Hay, Molly Walton and Eardley were noticeable standouts in this regard, and were well rewarded for their efforts with Metro midfielders Pisano, Plummer and Charlotte Taylor working hard to move the ball forward, and their Country counterparts Di Donato, Felicity Crank and forward Ash Van Loon involved in Country’s attacks, seeing the quarter end 0.1 (1) apiece.

After a goalless and heavily contested first quarter, the second started off with a bang, seeing Country’s Mia Van Dyke getting on the scoreboard in the first minute, sweeping up a spilt mark and snapping from about 30m out to get the first of the game, following up with her second later on in the quarter, positioning well to take an uncontested mark in the goal square in transition and put it straight through the middle. Despite going into half-time goalless, Metro looked good in the quarter with Rylie Wilcox and Charlotte Van Der Vlies involved in plenty for Metro in the midfield and Lulu Beatty standing up often as a last line of defense. For Country, Olivia Robinson, Bianca Lyne and Charlotte Simpson were instrumental in giving country the 2.2 (14) to 0.2 (2) lead.

Metro decided that it wanted to be invited to the goal kicking party in the third term, piling on four goals in what would ultimately decide the game. The first being a highlight reel goal for Jemma Rigoni, who is a Melbourne Father-Daughter prospect for next year, running onto a kick from Lily Hart, beating Country’s Hay and Di Donato in a foot race, taking a bounce and slotting it from about 30 out. McDonald was up next, capitalising on a dropped mark on the goal line from Hay to get Metro’s second, not even three minutes after the first. Not done there, McDonald bobbed up again later in the quarter, this time spoiling an attempted switch across goal from Country, following up at ground level, weaving past an opponent to throw it on her opposite foot and dribble it in for her second. A nice bit of team play from Metro saw Wilcox get herself on the board with a soccer goal just before the siren, ending the quarter with Metro leading 4.2 (26) to 2.3 (15).

The fourth quarter began with a Metro clearance forward, where, through some teamwork, the ball ended up with Reese Sutton who was able to snap herself a goal from about 30m out to give Metro a 17-point lead. The rest of the quarter was a scrap with neither side able to really grab clear control. Country got on the board with five minutes to go, with a Simpson kick forward from a stoppage getting to Eardley who was able to put it through for Country’s third goal, seeing the quarter, and the game, end 5.3 (33) to 3.4 (22) Metro’s way.

There were a lot of girls that really stepped up and marked themselves as ones to watch for next year, with the defensive trio of Eardley, Hay and Walton looking good throughout the day and stopping plenty of Metro goals. The 2023 draft eligible ruck Bianca Lyne was impressive with her work against the much taller Metro combo. Yasmin Duursma also had some good moments where she showed her composure along the half-back line and through the midfield.

For the victors, it was hard to look past Pissano and Wilcox as major players in their victory, with their strengths up forward translating into the midfield. McDonald was also very impressive all game, but looking particularly dangerous up forward after spending all year in defense. Eastern Ranges trio Busch, Laura Stone and Scarlett Potter were solid throughout the game as well, with Plummer also outstanding.

It seems a permanent move into the midfield is inevitable in her future, with so many athletic traits of hers standing out, largely speed and agility, that saw her have some really dominant patches throughout the game because no one else was able to match her in that regard. Her kicking has been noted before, but was next level during this game, hitting some 45 meter pinpoint passes that were vital in Metro’s transitional play, and on the rare occasion she could not find space to compose herself, her bombs out of backs were getting the same distance or more to create contests further down field. Also had really clean and quick hands on the inside, where she could get the ball back after giving it off and burst forward.

After missing out on the Good Friday clash, Wilcox came straight in and looked very good at the level. Splitting her time between the forward line and midfield, it was her speed and ball use that stood up above all else, able to outrun opponents and cleanly take ground balls with one grab, without breaking speed, it’s no coincidence that as she got into the game Metro looked more and more in control. It was also impressive to see her workrate to follow up, getting to her kicks to help out at ground level or try and receive a handball from her teammates. After missing a set shot early in the third it was fitting that her natural crumbing ability got her one later on, to reward her all round top performance.

Skipper for the day and the only Metro player also apart of the U19s squad, she has done everything she can to put her name up for selection against Queensland next month. Instrumental in the first quarter in repelling Country attacks from defence, thanks to her ball use in transition leading to a few inside 50 marks for Metro that unfortunately did not result in goals, but she was ever present in the areas Country rebounded out to, creating contests every time. When she moved up forward she kicked two impressive goals that came from turnovers she forced, showing her defensive work does not stop even when she’s up forward, and that she has got a really good sense for goal inside 50, making her a dangerous player in there.

Has been mainly used on the wing at NAB League level, but dealt with her switch to a more inside role really well, making solid runs in attempts to win clearances, and showing she’s not afraid to get in and win her own ball. Usually a player that will kick far more often than handball, it was good to see her mix it up and use her hand skills in close to open up the game to more well measured kicks rather than bombs out of the packs.

Positioned well behind the ball to take a few intercept marks or impact opponents who were looking to get uncontested marks, making it a genuine scrap at the Metro defensive 50 line or sometimes a little further up the wing. Her ball use was also at it’s high standard going forward, hitting leading targets well or looking to switch the play out of defense to loose options.

Moving into a full time midfield role in the absence of some teammates moving up to 19s on Thursday, her tenacity and attack on the football meant the absence was barely noticed, not afraid to throw her body around to knock opponents off the ball to win it herself. It was also good to see her get involved in open play, looking to be an option further up the field or laterally for her teammates, then using it well going forward.

Whilst she did not win a whole lot of the ball, her workrate and pressure work was noticeable, especially in the first and fourth quarters where the game was highly contested and scrappy. She was stationed on a wing and was always there at the fall of the ball when it was on her side, often neutralising three-on-one situations with a spoil or a tackle on Country midfielders. Worked back to the defensive 50 to create outnumbers as well, where her tackling was again on display.

Was mostly against a ruck who had 12cm in height on her, but her leap and aggression in the ruck contests saw her win most of the hitouts around the ground and in the centre, not afraid to put the knee up and go through her opponent. Her follow up work at ground level was also super impressive, winning ground balls well and moving like a slick midfielder when she had ball in hand.

Was thrown about in quite a few different positions, playing mostly midfield but also being put into the backline or forward line depending on where the team needed her, she was consistently a cool headed and composed presence with the ball in hand, who could control the tempo well and almost directed teammates where to go with her disposal.

Playing as a deeper defender, it was Hay’s safe hands that impressed the most, taking some crucial intercept marks at half back, or even contested marks in the goal square to stop a certain goal, she was a very solid bookend for Country throughout the day and countered the high bombs inside 50 that Metro were forced into at times really well. Despite making a few costly errors in the third quarter, it did not detract from her game, as she was still confident and composed in her marking and subsequent ball use in the final quarter.

Was a strong part of the Country defence for the game, being the one to take the smaller and quicker forwards, her defensive skills were on show, able to neutralise a lot of contests where she didn’t have the advantage, and even win some, where she’d kick long out of defense to either a Country outnumber or a pack.

Came into the game mostly in the second half where she was able to assist in defense a lot more, and her natural ball winning and positioning meant she was a strong contributor in keeping Metro’s score relatively low for the opportunities they had. Was not afraid to take some more daring options with her disposal which was good to see.