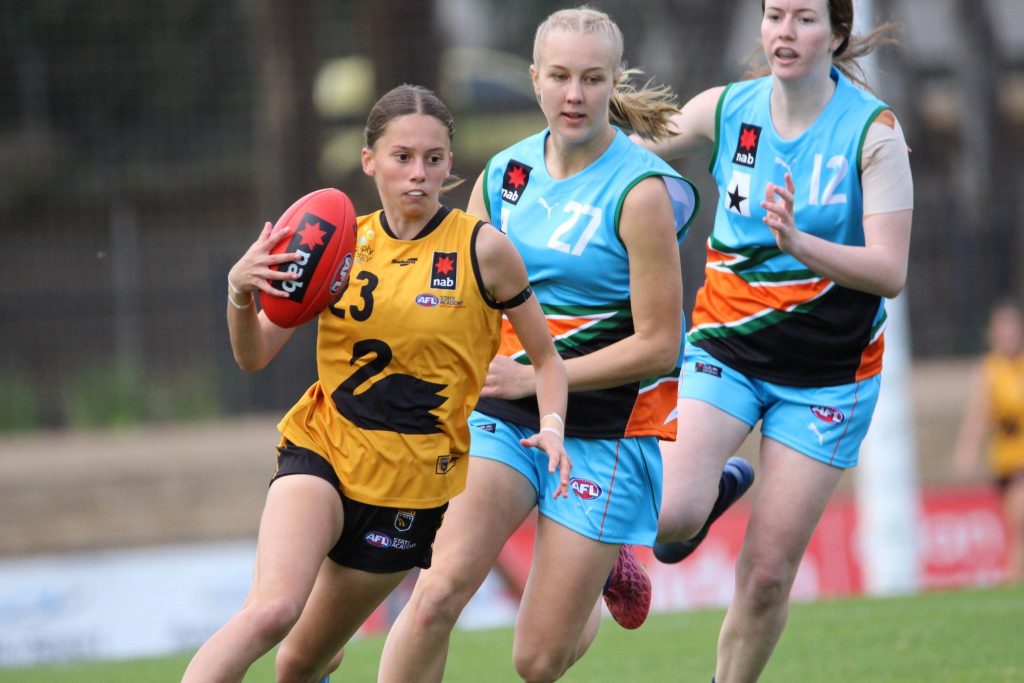 WESTERN Australia claimed its first win of the AFLW Under 19 National Championships on Monday afternoon, defeating the Allies by 33 points at Avalon Airport Oval. The Black Ducks led from the first goal and never looked back, absorbing a good amount of heat during the second term and applying their own scoreboard pressure to win 9.7 (61) to 4.4 (28).

Quick ball movement in transition and even more speedy play inside forward 50 proved the Sandgropers’ main avenue to goal, with the well-drilled unit moving the ball well in some delightful end-to-end passages.

Usual defender Mel Hardy started up forward for Western Australia and snagged the game’s first goal, benefitting from one of her side’s trademark forward surges from defence. Ella Roberts was one to tear the game open with her run-and-carry, which was a prominent feature in the build-up to Tajah Griffiths’ major. It saw Western Australia take a two-goal lead into the first break.

Needing a spark, Cynthia Hamilton kick-started the Allies’ game with a couple of fierce tackling efforts. She booted her side’s opening goal after the second defensive act, slotting a set shot after a 50-metre penalty. After Jessica Doyle soccered the ball home from point-blank range, the Allies were back to within a goal.

But for all their dominance in the second term, the Allies could only break even as Western Australia hit back through Ashleigh Reidy and Sarah Lakay. The 16-point half time buffer was unkind to the Allies, but put Western Australia in the box seat to really take hold.

Having taken their opponents’ best blows on the chin, the Black Ducks broke the contest open with three goals in the third quarter to all-but ice the game. Two of the three came late in the stanza, making it a 33-point lead heading into the last break.

Lakay snapped up a contested mark and slotted her second goal early in the final period to put the result to bed, though the Allies played out until the final siren and added a couple more major scores to their total. Still, they could only break even in the term overall, in the face of WA’s forward firepower.

Courtney Rowley was classy for the winners, while Roberts provided some excitement forward of centre despite being in the wars late on. The spark of Makaela Tuhakaraina was also important among others up forward, while talls Lauren Wakfer and Lakay also shone at either end and through the ruck.

For the Allies, Hamilton was hard at it and collected plenty of the ball playing off a wing and through midfield. She and Doyle were the two standout players, with the latter adding to her promising highlight reel up forward. Claire Ransom was also serviceable alongside goalkicker, Isadora McLeay.

In the next round of action, Western Australia will take on Vic Metro on Thursday, while the Allies prepare to lock horns with South Australia on the same day, with both games to be played at Trevor Barker Oval.