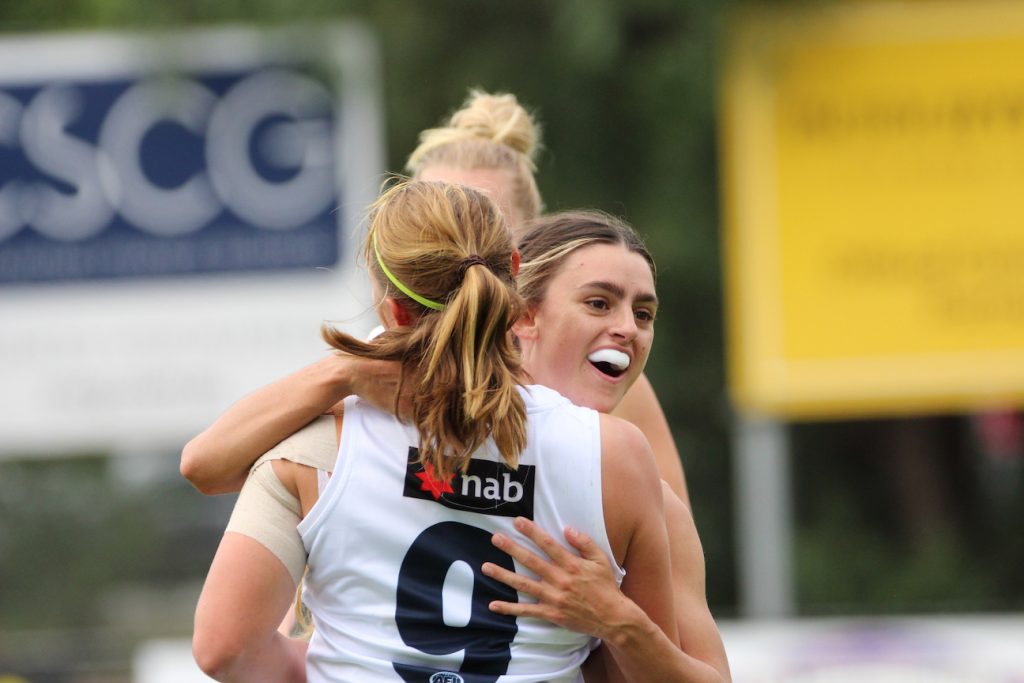 ROUND 2 of the AFLW U19s National Championships was opened up with an exciting contest between South Australia and Victoria Country at Avalon Airport Oval in Werribee, with the midfield battle being an essential part of the eventual Country victory. Forward half efficiency initially evaded Country, never having any more goals than points, but the repeated entries became too much for SA to deal with, as bottom-aged forward Paige Scott decided to win the game off her own boot, leading to the 5.6 (36) to 3.3 (21).

The first quarter was a strong start for South Australia, with a lot of drive being produced from their engine room with Zoe Prowse and Lauren Young combining well as a ruck and rover duo to win plenty of it from stoppages, with their hard-work rewarded by teammates Lauren Breguet and Lauren Clifton with clinical finishing in front of goal. For Country, the efforts of Elizabeth Snell and Grace McRae saw them involved in plenty early on, and slowly get on top as the quarter went on, with Country getting a goal through co-captain Tara Slender, with three more shots on goal drifting just wide, seeing SA lead at quarter time 2.0 (12) to 1.3 (9).

The second quarter felt like much more of an arm wrestle, with neither team getting many deep inside 50s. Jade Halfpenny took advantage of one of the few that South Australia got, running onto a loose ball early in the quarter, fending off an opponent and then dribbling from the outside of her boot to kick SA’s solitary goal for the quarter. Keeley Kustermann started to win more of the ball in the midfield as well, linking up with the likes of Laitiah Hunyh and Brooke Tonon for some nice passages of play. Country had Nyakoat Dojiok and Jaide Anthony to thank for a sound defensive effort, both being strong aerially players and providing plenty of run going forward, with Dojiok delivering a lovely kick to Renee Tierney in the goal square to kick Country’s only goal, seeing the quarter end 3.0 (18) to 2.5 (17) SA’s way.

The third term was a bit of a breakout quarter from County, with their bottom-aged star forward Paige Scott, coming off a two goal performance against Vic Metro, kicking two solid goals, with one in particular involving her out running an opponent to belt it through. Her teammate on the wing, Aurora Smith, also had a good quarter, with her work through traffic being a highlight. South Australia saw Zoe Venning have good moments as well, competing strongly in stoppages and at ground level, but also being damaging in the air. Rotating ruck Amelie Borg was strong as a kick-behind defender, troubling Country talls. The quarter ended 4.5 (29) to 3.3 (21) with Country leading.

Early on in the fourth term, South Australian midfielder Brooke Tonon tackled Anthony on the wing with the latter unfortunately having to be stretchered from the ground and Tonon subsequently red carded from it, with Slender also sent off with a yellow card later on for a late high hit on an opponent. Despite these unfortunate incidents, the final quarter gave us a fairly exciting finish, with Scott getting herself a third early on. South Australia went on to control a lot of the play for the rest of the quarter, with the two standouts Prowse and Young continuing to do all they could to get SA across the line, and Charlotte Dolan applying elite pressure in the forward half.