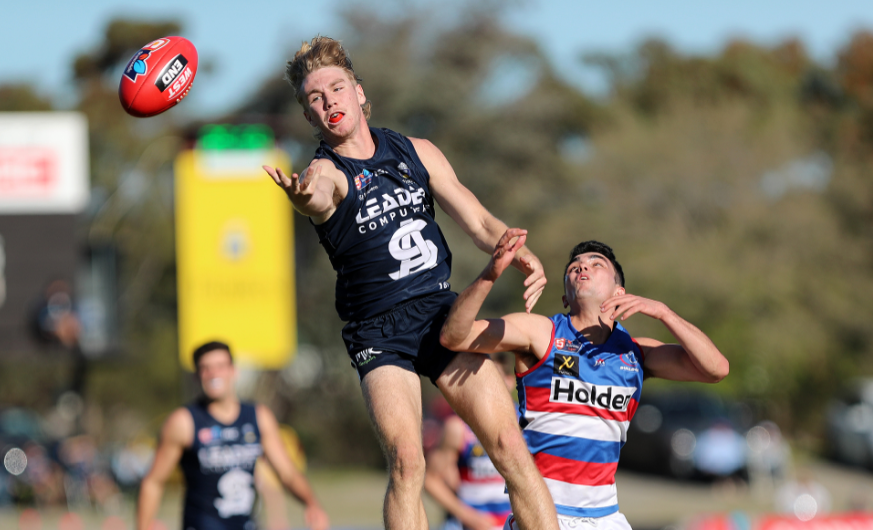 HIGHLY rated South Adelaide Panther Jason Horne backed up his 19 disposal and one goal effort in Round 1 in the South Australian National Football League (SANFL) again with 16 disposals, one goal, six tackles, and four inside 50s on Saturday afternoon at Prospect Oval. Horne was set for a challenge coming up against the experienced North Adelaide Roosters in Jarred Allmond’s 200th League game, one of the various Roosters players to get physical with Horne throughout the contest.

He started the game in the middle and showed his already-accustomed comfortability with the bigger bodies of senior footy, consistently looking to engage body around stoppages and get first hands on it. Reigning Magarey Medallist Campbell Combe in particular worked to deter Horne from contesting but to little effect. Horne did a good job of getting to stoppages all game when playing on-ball, but at times was too overzealous in his attack. He would often move into a stalemate contest in a pack and leave his opponent at the stoppage open on the outside. After the first goal of the game, he moved forward and continued to spend seven to eight minutes on-ball, and then to half-forward.

He was a lead up target on centre wing twice in the first term but mis-kicks in blustery conditions did not favour him despite the separation from his opponent. When the ball was in his aerial vicinity, he displayed his leap and competitiveness to get hands on it without clunking those big marks he has shown he can. A brilliant chase down smother highlighted his manic defensive pressure in the forward half as he followed up cleanly to dispose of it through hands. Despite his age, he showed good volume in his tackles and bumps as he was able to move bodies when required.

He started in the middle to begin the second quarter and gravitated less to the drop of the ball, while still maintaining a strong front position. His spread from the stoppage was smooth as he got involved in a rebounding link. Although it perhaps was not the best choice to go to with his kick, he followed up well again to apply enough pressure to skew the North Adelaide kick. He covered good distance to get to stoppages again and found himself deep in defensive 50 unsure of what to do. After taking on a couple of tackles and only just handballing to no one in particular, the rebounded ball came straight back for a Roosters goal. He was again confronted by senior North Adelaide players as they let him know how they felt, but he showed good temperament and maturity to uphold a positive body language and strong intent as the game restarted.

Moving back forward he continued to try and be dangerous aerially, but the wind was making it hard. Horne then made something out of nothing as a pressured shot on goal hit the behind post after a nice gather. Despite his aerial efforts, he showed a good awareness of his role to play as a traditional half-forward pushing up at the centre bounce to open room behind him for his key forwards, and also working through most contests to get front and centre.

Horne would not get to another centre bounce in the second half as he spent most of his time at half-forward and looked his most dangerous in the third quarter. After some more confident push and shove, a classy one-handed pickup resulted in a point after kicking from 45 metres out under pressure. The physicality continued, and he was dropped by Allmond after some wrestling saw Horne on top and was able to receive the free kick. He slotted the set shot which was pivotal to the positive attitudes of his teammates as the Panthers ultimately won the game on the back of their third quarter effort. Immediately after, Horne missed a snap attempt on goal and continued to cause headaches for the Roosters. His defensive pressure remained, as did his workrate, finding space on multiple occasions with long sprints.

Looking to work on his field kicking inside 50 before the season, he found a teammate beautifully who dropped a mark which would have resulted in a set shot for goal, but a lot of his field kicking for the day was somewhat rushed out of stoppages and contests. He had 12 kicks and four handballs but when he had time, his skills were flawless.

Horne backed up his performance last week and played a quality role rotating through the middle and half-forward, and could have very easily had a three-goal game. South Adelaide will play Port next week as he will be challenged with some AFL-listed players.