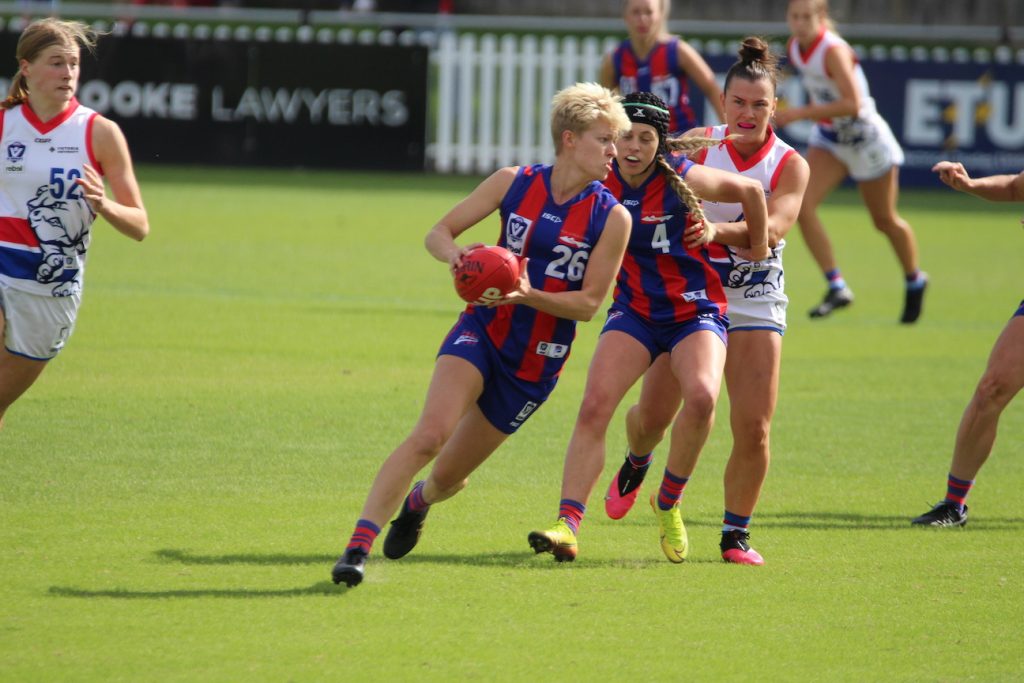 ALL teams in the Victorian Football League (VFL) Women’s competition have now recorded a victory in season 2021, after Darebin Falcons defeated North Melbourne at Arden Street by 12 points on Saturday. The victory meant the Falcons joined both Hawthorn and Western Bulldogs on one win, as as other bottom six sides Williamstown and the Kangaroos also suffered defeats.

At the other end of the ladder, Collingwood had a huge defensive effort in the wet against Carlton to knock the Blues out of the top six, whilst Port Melbourne, Essendon and Geelong all celebrated wins, the latter in a tight victory holding on against Casey Demons at Casey fields to leap frog the Demons into fourth spot.

Picking themselves off the canvas after skipper Georgia Nanscawen‘s injury left them without a star midfielder, Essendon ground out a win at Box Hill City Oval against Hawthorn by 13 points. The Bombers started the stronger of the two sides thanks to a goal from Mia-Rae Clifford, but it was Hawthorn who managed to put all the scores on the board over the next two terms. The home team could not capitalise through the big sticks, with only Eloise Chaston‘s second quarter major the sole six-pointer. It meant the Hawks led by five points at the final break, but a flurry of three goals in the final term saw the Bombers overrun the Hawks and sit pretty in third spot.

Despite Nanscawen going down, it was the field tackling of Alana Barba and Eloise Ashley-Cooper (22 tackles apiece) who provided the grunt work, and Lori Stepnell, Eloise Gardner and Cecilia McIntosh who held up in the overcast conditions. Hawthorn had plenty of chances, with Eastern Ranges duo, Isabel Khoury (22 disposals, seven tackles) and Eloise Chaston (14 disposals, three marks, 1.3) lively, with the pair kicking 1.5 of the Hawks’ 1.10 score between them. Jess Grace shared the ruck work with Kate Dudley and Tamara Luke, while Gold Coast Suns’ Georgia Bevan teamed up with her ex-Crows coach Bec Goddard to have an impact for the team in a losing side.

Having their work cut out for them early, and forced to come from behind, the Southern Saints also had a strong final term to boot the only two goals of the last term to run over the top of a gallant Williamstown at Trevor Barker Oval. The Seagulls burst out of the blocks in the first half, with three goals kicked in 13 minutes to lead by 12 at the first break, before the home team clawed their way back into it. Tayla Kearns‘ second goal five minutes into the third term put the Saints back up, before Lauren Gooden responded nine minutes later with her own second major to regain the lead at the final break for the Seagulls. Back-to-back goals to the Saints through Tara Bohanna and Gabi De Angelis in the final term saw the home team come from behind and secure the win in front of home fans.

Bohanna was sensation across the forward half with a goal and 13 hitouts from 22 disposals, whilst it was the defensive strength of Jacqui Vogt (11 tackles, 17 disposals), and class in front of goal from De Angelis (14 disposals, five tackles, 2.2) that stood out. Rebecca Neaves and Kearns also stood out, while Ebony Nixon and AFL Women’s Saint, Alice Burke found plenty of it. For the Seagulls, Megan Williamson was again the top-ball winner with 20 touches, whilst it was Ruby Tripodi (16 disposals, three tackles), Scarlett Dunell (19 disposals, four tackles) and Aimee Whelan (19 disposals, eight tackles and a goal) who supported the team strongly.

A match between two bottom four sides, including a winless one, is not a match you particularly expect to keep you on the edge of your seat, but that is exactly what North Melbourne and Darebin did at Arden Street on Saturday. The teams were neck-and-neck in the first half, with the Kangaroos taking the one-point lead into half-time of the huge clash, but the Falcons, led by Stephanie Simpson (four goals) up forward, kept pressing to take a 13-point lead into the final break. Each time the Falcons kicked away with a major, the Kangaroos would answer it in the final term, but they could not bridge the gap with the Falcons getting up by 12 points in the end, 6.6 (42) to 4.6 (30).

Simpson’s four goals in a combined 10-goal game was hard to look past for the Falcons in a super effort, whilst Alice Caddy and Samara David also stood out in the win. Nicole Callinan provided the experience coming back into the side, as Victoria Blackwood was also a strong contributor to break the Falcons’ drought in season 2021. Alexia Hamilton slotted two crucial goals for the Roos in defeat, while Molly Eastman, Airlie Runnalls and Katelyn Cox were named the Roos’ best in the win, as the defence did well, but not enough to secure the four points.

Port Melbourne has continued streak to post a comfortable 35-point win over Western Bulldogs at ETU Stadium, moving to 6-0 for the season and handing the Bulldogs a fifth straight loss. The visitors were strong early, and even kept the home team at bay in the third term as the Dogs’ defence starred, but a couple of final term goals just pushed the final margin out to beyond five goals thanks to some strong efforts from Richmond-listed talents in the 6.7 (43) to 1.2 (8) victory.

Geelong managed to hold its nerve against a fast-finishing Casey Demons outfit at Casey Fields on Saturday afternoon, getting up by two points in the contest. The returning AFL Women’s listed players hit the scoreboard early, with Carly Remmos, Darcy Moloney, Georgia Clarke and Laura Gardiner booting their first four goals of the contest, leading by 15 points at three quarter time courtesy of Madisen Maguire‘s fifth team goal. Isabella Simmons did her best in the final term to boot two fourth quarter majors, but it would not be enough as the home team fell two points short, 4.6 (30) to 5.2 (32).

Collingwood has taken care of traditional rivals Carlton to remain undefeated from six matches in the VFL Women’s competition, keeping the Blues to just four behinds in wet and windy conditions. The Victoria Park venue gave Pies fans the chance to cheer on their heroes and there was plenty to cheer as they kept Carlton scoreless from three quarters, whilst kicking the only two goals of the match. Conditions made goalkicking difficult, and it showed with a dominant 12 scoring shots to four, but a 2.10 (22) to 0.4 (4) final scoreboard.

Tricia Cowan and Mollie Emond were the only players to eventually split the big the sticks for the Magpies, as plenty of players had their chances inside 50. Caitlin Bunker was outstanding for the black and whites in the win, as Maria Neal and Amelia Velardo looked lively, and Nicola Weston was also named in the Magpies’ best on the day. It was a challenging day for any forwards, but particularly Carlton’s forwards in enemy territory, but they had a number of standout players. Akayla Peterson continued her great form in 2021 named Carlton’s best alongside the AFLW-listed Maddy Guerin. Tereza Zampaglione and Stephanie Lawrence were also strong in defeat, as the Blues moved to a 3-2 record and slipped just outside the top six, while Collingwood maintained touch with Port Melbourne at the top of the table.