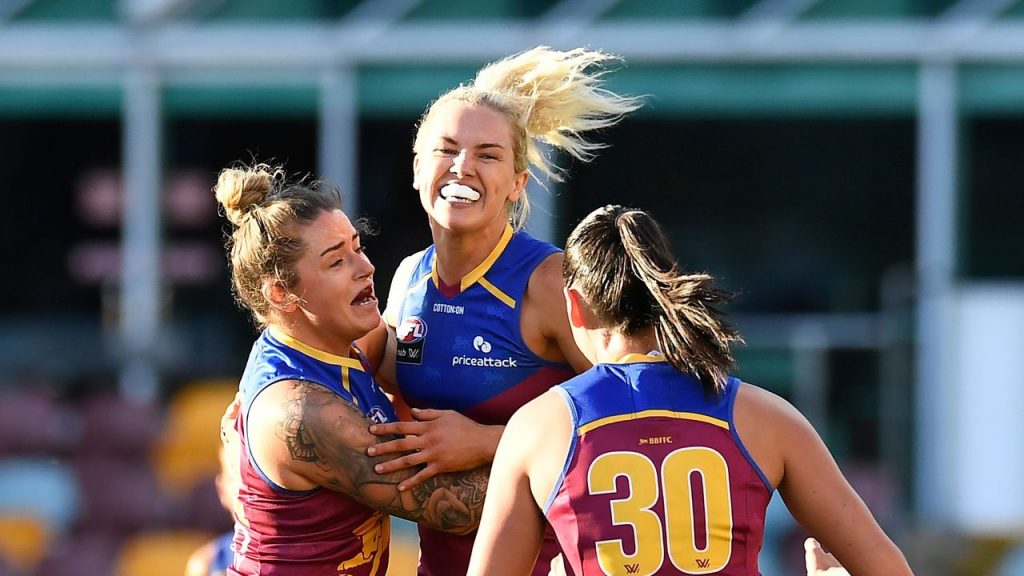 A HARD-fought contest is what you want to see in finals footy, and that is exactly what AFL Women’s fans got in the second preliminary final on Saturday afternoon, with a see-sawing contest eventually seeing Brisbane claim an excellent four-point victory over a tough Collingwood outfit 7.3 (45) to 6.5 (41).

Brisbane was under fire from the get-go, unable to break through the heated Magpies midfield brigade as a dream start saw Jaimee Lambert and Ruby Schleicher hit the scoreboard early, with the hosts unable to get going. A couple of errant Ash Brazill attempts up forward proved the Magpies would not be kept quiet early as they were last week, but a maiden inside 50 for the Lions resulted in its first goal too, as Jess Wuetschner dribbled it through to reduce the lead midway through the term, as the footy went from coast to coast with the two sides worked to establish momentum.

Ally Anderson and Emma Zielke were proving crucial early hunting for the footy and looking dangerous inside 50, whilst the tight head-to-head battle between Cathy Svarc and Bri Davey early on was a testament to how much was on the line. What was a hot start from both sides saw an extended period with little scoring, as the two sides settled into the contest and a midfield stalemate emerged with the visitors leading 2.3 (15) to 1.1 (7) at the first break.

A huge second quarter began with a Dakota Davidson mark and goal to get the Lions within a couple of points, as Greta Bodey snapped true to take the Lions’ first lead of the day, but the contest would not let up as youngster Tarni Brown piled on the pressure with an excellent running goal. The Magpies had the numbers back limiting scoring chances for the Lions, however a Lions flood through the middle saw neither side able to find clean hands to the footy. But Orla O’Dwyer snapped truly to break through the mess and retake the lead, breaking the defensive stalemate as Davidson booted a second to extend the margin to 10 points. What had been the Magpies’ footy in the first saw the momentum switch and a clear scoring end emerge, with Brisbane’s four straight goals to Collingwood’s one setting up a huge second half of action.

The Magpies needed a quick goal to start the third quarter, and whilst it did not come easy a Sophie Alexander bomb from outside the 50m arc did the trick. A Sharni Norder major put the Magpies back in front by just two points as the momentum swung once more, as Davey broke free of her tight tag to pile on the pressure across the ground. Anderson continued to wreak havoc but was lacking effective backup, as the final quarter came down to confidence and which side could retain momentum.

The final quarter was as tight as could be with an early touched behind from the Lions taking it to a one-point ballgame before a Bodey toepoke in the square saw two straight scores for the home side as the Lions stole back a five-point lead. A shanked kick from Davidson resulted in a Stacey Livingstone mark but sloppiness off the foot saw the Lions claim the footy through Tahlia Hickey and another chance for Davidson, who slotted her third to extend the margin to 11 points. The tough contest continued for the remainder of the match as bodies were sent flying, with both defence-lines holding strong and Brazill booting her maiden goal with 21 seconds on the clock to give the Magpies a sniff, trailing by just four points as the clock wound down to the tune of a Brisbane victory.

For the winning side, Anderson was hugely influential with 24 touches and six tackles, whilst eight tackle efforts from Svarc and Bodey paid off in the tough affair. Davidson managed three goals from her 12 touches and  five marks, whilst for the Magpies it was surprisingly Brazill who came away with the biggest score for the black and white with 1.2 from her 16 touches and five marks, as her five fellow goalkickers all booted one apiece. Whilst she was held well early by Svarc it was Davey who led all comers with 23 touches, as Britt Bonnici and Schleicher also proved influential.

The Lions will travel to Adelaide next week for their second AFLW grand final appearance against the Adelaide Crows, looking to knock the minor premiers off their perch on home turf.