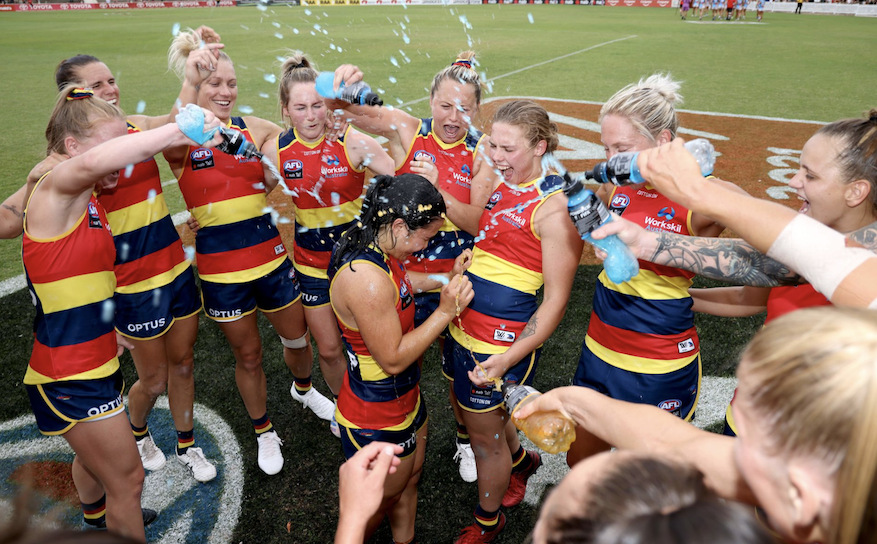 THE AFL Women’s competition has reached its penultimate week of action, with only the top four sides remaining in the race for the 2021 premiership. Fremantle and North Melbourne were eliminated in last weekend’s qualifying matches, setting up what should be a cracking day of football. Two sides refreshed after a week off and two sides looking to keep their momentum rolling following wins last weekend have fans around Australia ecstatic for the preliminary finals ahead. Will top two sides Adelaide and Brisbane justify their positions on the ladder, or will Collingwood and Melbourne do Victoria proud and make their first grand final?

Following a strong finish to the season, the Crows ended the home and away season on top of the AFLW ladder. This earned them a week off and the home ground advantage in Saturday’s prelim final. Their spot on top of the ladder also comes with a target on their backs, as they are the team to beat – a feat the in-form Demons will be looking to achieve in this match, with recent history on their side. When these sides last met, the Demons upset the Crows by 28 points in a convincing win. This result will give them confidence as they enter Saturday’s match with the underdog tag.

The Crows will be looking to apply the same pressure to their opponents that was applied to them the last time these teams met. The Demons put the Crows under constant and fierce tackling pressure as they ran out 28-point winners. The Crows will be using this as motivation, and if their midfield can grab control of the game as expected, it will be hard for the Demons to repeat the result earlier this season. Either way, expect a close contest as both teams will be fighting to the final siren to secure a spot in the grand final.

Melbourne will be without Daisy Pearce who injured her medial cruciate ligament (MCL) in the Dees’ Round 9 match against Brisbane and missed her side’s qualifying final victory over the Dockers. She remained on light duties at training on Thursday and was ruled out last night to face the Crows. Apart from Pearce, both sides have no unexpected niggles or issues, with the only players ruled out being on the long-term injury list.

The midfield battle will be the key matchup, with Adelaide’s midfield famously elite amongst the competition with a combination of Ebony Marinoff, Anne Hatchard and Erin Phillips. This trio often have a large say on the result of their games, but Melbourne have proven their engine room is more than up to the task. Led by veteran on-baller Karen Paxman, the Demons have the capability to match the Crows in the middle and will be looking to do exactly that on Saturday.

Despite top four finishes, both teams finished the season in less-than-ideal form. The Lions and the Pies both lost their final game of the season, but the similarities end there. The Pies pulled off a stunning win over North Melbourne last weekend, kicking three goals in the last quarter to pull of a heist and knock the Kangaroos out of the finals series. They will be looking to keep this momentum going but face a tough task against an experienced Brisbane outfit. The Lions have been in this position before, looking to make their third grand final appearance since the competition’s birth in 2017. They have stars all over the field, and earning a home ground advantage is a massive help. Refreshed after a week’s break, this Lions team will be refreshed and hungry to advance.

Last time these teams met in round seven, it proved to be a thrilling clash that went down to the wire. Moved from Brisbane to Victoria due to COVID risk, neutral ground VU Whitten Oval delivered strong winds that made things tough for both sides. The Lions just came out winners by three points, and two Pies players were injured in the process in what proved to be a costly game. Both sides will reflect on that result and should conditions permit, improve on their performance.

Both sides are quite fortunate on the injury front, with each side only ruling out one player each. For the Lions, their relatively clean bill of health continues, with only Lily Postlethwaite unfortunately ruled out due to an ACL tear suffered earlier in the season. For the Pies, they emerge from last week’s win with no fresh injuries. While Lauren Butler will miss this week’s match, she may recover in time for next weekend should the Pies advance, while Sophie Casey has returned from a concussion.

Lions tagger Cathy Svarc will likely once again have her eye on negating the impact of star Pie Bri Davey. When the two sides faced off in round seven, Svarc held Davey to only 14 disposals, well below her usual output. Davey can have a huge impact on any game given free reign, and the Lions will be keen to prevent this from happening.