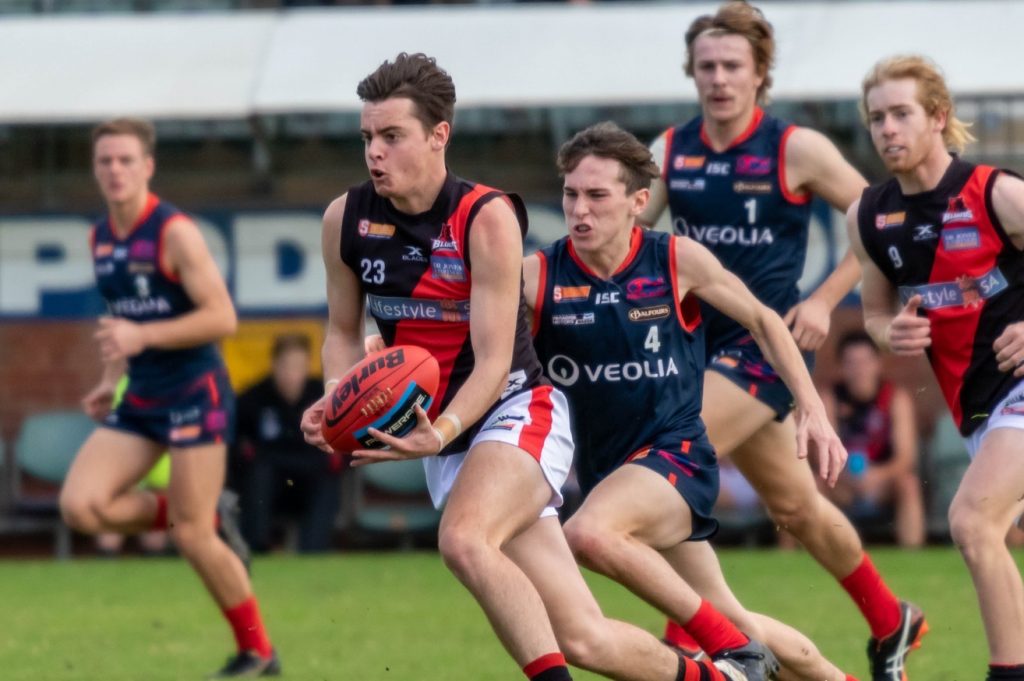 IN a Draft Central first, we have streamlined a look across the nation with a number of state leagues coming back for Round 2 after a big opening round. Competitions in South Australia, Western Australia, Tasmania and Queensland all take place over the weekend and we preview them all in one convenient preview.

The full bill of teams will be out in force for Round 2 of the QAFL after last year’s wooden spooners Wilston Grange got the one-point win over newcomers Noosa Tigers last weekend. The Gorillas matched their total wins from last season – albeit from a shorter nine-game season – from just one match, and will host Maroochydore this weekend. The Roos have teenager Ben Thomas on the wing, with key position tall Max McDonald named at half-back. For the Gorillas top-age draft prospect Bae Gallop has been named onball, alongside Kuot Thot (half-forward flank). Ky McKenzie (interchange) and Oscar Stewart (back pocket) are others who are young talents to watch for the home side.

Meanwhile grand finalists Broadbeach will host Labrador in the Cats’ first game of the year, while reigning premiers Morningside will travel to Palm Beach Currumbin for an away game first up. Naturally the Panthers were happy to wait until Round 3 to unfurl the flag against the team they conquered in the 2020 decider. The Cats will have a couple of Suns Academy members who have come through the program in Ryan Pickering and Finn Brown (emergency), while for Labrador, small forward Blair Rubock is back again in the yellow and black, with Bryce Retzlaff to provide a a tall target and crucially, ex-Gold Coast and Brisbane talent Pearce Hanley named onball.

Will Bella is the one to watch for the Lions as they try to take down the reigning premiers in Round 1, as the Gold Coast Suns’ tall has been named in the forward pocket. He will play alongside the likes of Ethan Hunt and Ashton Crossley who have both come through the Northern Academy programs in recent years. For Morningside, Ben McCarthy has been named at half-back and is one to watch from the Brisbane Academy, while Nathan Colenso and Tom Griffiths have come through the Northern Academies in recent years and remain youngsters to keep an eye on.

The 2019 QAFL premiers Surfers Paradise will be eyeing off a much better season in 2021 after just two wins last year, taking on another new team in Redland-Victoria Point. The Demons will hit the road against the Sharks in the clash, whilst the final match of the round will see Sherwood Districts hosting Mt Gravatt. Noosa Tigers will have a bye after the tight Round 1 loss.

Not named as a starter, but young Jaspa Fletcher will be one to watch for Sherwood this season, with Adrian’s son set to create plenty of headaches inside 50. Speaking of headaches inside 50, it is great to see Kobe Tozer returning from injury to be named at full-forward for the black and whites. Up the other end, Conner Bulley has been named in a forward pocket as another teenager in the side, whilst for the Vultures, Lochlan Harrop (half-forward) and Ethan Kerr (back pocket) are a couple of teenagers in the Round 2 team.

Surfers Paradise have players to keep an eye on as they keep developing such as Matthew Green and Myles Jewell returning to the side to take on the Sharks. Redland-Victoria Point is a new side entering the QAFL, though Redland has had its success in the NEWAFL, and ex-Collingwood talent Peter Yagmoor is one to watch on the list, as well as ex-Sherwood player Caleb Franks.

Former Tasmanian State League (TSL) and ex-West Coast Eagle Mitch O’Neill has been named for his South Adelaide debut, coming into the Panthers’ team alongside another former TSL and ex-AFL talent in Fraser Turner. They will beef up the Panthers’ starting team to take on North Adelaide in the SANFL League clash, who celebrate Jarred Allmond‘s 200th game. Top draft prospect will start on the interchange for the Panthers, whilst Dyson Hilder will be at full forward for the Roosters.

Another Tasmanian coming into the league is Hamish Allan, with the ex-North Hobart 20-year-old running out for Sturt this year. He will be amongst the side that features past South Australian representatives at Under 18s level, Tom Lewis, Josh Shute and Jed McEntee among others. Their opponents Norwood will celebrate Cameron Shenton‘s 100 games, but will be without Richard Douglas for the clash due to personal reasons, though a player who has garnered draft interest in recent years in Cole Gerloff returns to the Redlegs.

A trio of teenagers will potentially line-up for the League side with Brady Searle, Cooper Horsnell and Will Chandler all named in the side for their debuts, with ex-Demon Billy Stretch out with an ankle injury. Their opponents Woodville-West Torrens will unveil Canberra Demons’ recruit Mitchell Hardie who comes into the side along with the huge – physical and metaphorical – inclusion of ruck Jarrad Redden.

Teenage talent Bailey Chamberlain has been named for West Adelaide as one of three inclusions up against Adelaide’s reserves side. He joins new recruit Nick Steele as a potential inclusion, with no outs as of yet, and the likes of Josh Gore and Elliot Dunkin as ones who have caught AFL clubs attention in past years. The Crows will include ex-Glenelg onballer Luke Pedlar for the first time, with Daniel Jackson rested from the match.

Meanwhile Port Adelaide will be without Lachie Jones (debut) and Tom Rockliff (concussion) in a couple of massive outs, which gives Central District a big bonus at the selection table, welcoming in former Panther Brett Kennedy alongside ex-Tiger Ben Nason who returns into the team for the clash against the Magpies.

In Round 2 of the TSL, Glenorchy enter the competition after a Round 1 bye, set to take on a Clarence team coming off a hard-fought seven-point defeat. The Roos took a little too long to get going against an Allen Christensen-inspired Lauderdale outfit, and they will be keen to step it up against the Magpies.

Glenorchy will of course be without legend Jaye Bowden who retired last season, with Matthew Joseph set to be the focal point up forward, whilst youngster Callum Thompson is one to keep an eye on in the match. The Roos lose a shot of young guns due to Tasmania Devils returning to the NAB League with Oliver Davis, Baker Smith, Darcy Gardner and Noah Holmes all out, while ex-Demon Colin Garland has been named at full-forward.

In the Tigers-Lauderdale clash, much has been spoken about the huge impact that Sam Siggins and Nat Franklin had through the midfield with Christensen dominating up forward. The trio will look to have a similar impact when they travel to Kingborough to take on Tigers, who had a young gun stand out in Round 1 with Zach Adams impressing off a wing, whilst Lachlan Gadomski and Riley Ashlin are other young talents.

North Launceston will be without the Sanders brothers in Ollie and Ryley Sanders, as well as Nathan Pearce for the clash against North Hobart, as the Northern Bombers need to find a way to bounce back from a 55-point loss to reigning premiers Launceston. They still have experience in Brad Cox-Goodyer through the middle, but have a new-look side to its recent years. For the Demons. The Demons are coming off a loss themselves, going down to Tigers by 11 points, and will be massively depleted with a ridiculous amount of young talent out of the side including George McLeod and Jye Menzie. It will be up to the next ground of players coming in, with 12 inclusions – including four emergencies – to the Demons side.

East Perth and Peel Thunder will be keen to quickly move on from Round 1 losses as they do battle in Round 2. The Royals will be without Nick Robertson, but still have Jackson Ramsay and Rohan Kerr among the midfielders as former AFL talents. Peel Thunder will bring in a quartet of Fremantle players with Griffin Logue and Liam Henry joining Mitch Crowden and Bailey Banfield in the side, with Sam Sturt‘s five-goal haul enough to earn a recall at the Dockers, as Connor Blakely and Taylin Duman also are out. A non Fremantle-listed talent to watch for is young gun Brodie Lake who is named in the back pocket.

Two teams that picked up wins in Round 1 were Claremont and South Fremantle, with ex-Dockers Jason Carter and Alex Pearce a couple of big inclusions for the Tigers. They have plenty to like about their lineup with Jye Bolton, Kane Mitchell and Jake Patmore among the talented experienced players in there, though Jacob Van Rooyen is the one to watch as a potential Top 10 pic, lining up on ex-Geelong Cat Blake Schlensog who is playing for South Fremantle. The Bulldogs will be without Cam McCarthy for this match, but still have Haiden Schloithe and Matthew Parker, and the exciting Ben Rioli.

A potential matchup between Chris Masten and Lewis Jetta on the team selection sheets is a mouth-watering clash for any West Coast Eagles fan, with the two ex-talents doing battle for Perth and Swan Districts respectively. Jetta might just have the leg speed in that head-to-head, with Sam Fisher, Jesse Palmer and Frank Anderson among the other Swans to keep an eye on. For Perth, ex-Murray and St Kilda talent Doulton Langlands joins ex-Docker Brady Gray and ex-Eagle Brant Colledge in the Perth midfield which will provide some resistance for the clash.

It is early days, but a top of the table clash between Round 1’s big winners in East Fremantle and Subiaco opens the second round with plenty to get excited about. Ex-Docker Hugh Dixon is joined by youngster Finn Gorringe who comes into the Sharks’ League side, while Jonathon Marsh and Dillon O’Reilly make a damaging forward duo. For the Lions, Ben Sokol is a goal-scoring machine, with Lachlan Delahunty starting his year off strong, set to go head-to-head with Josh Schoenfeld in a battle of the leather poisoning talents from the opening weekend.

At the time of publishing, the West Perth and West Coast teams were not out.