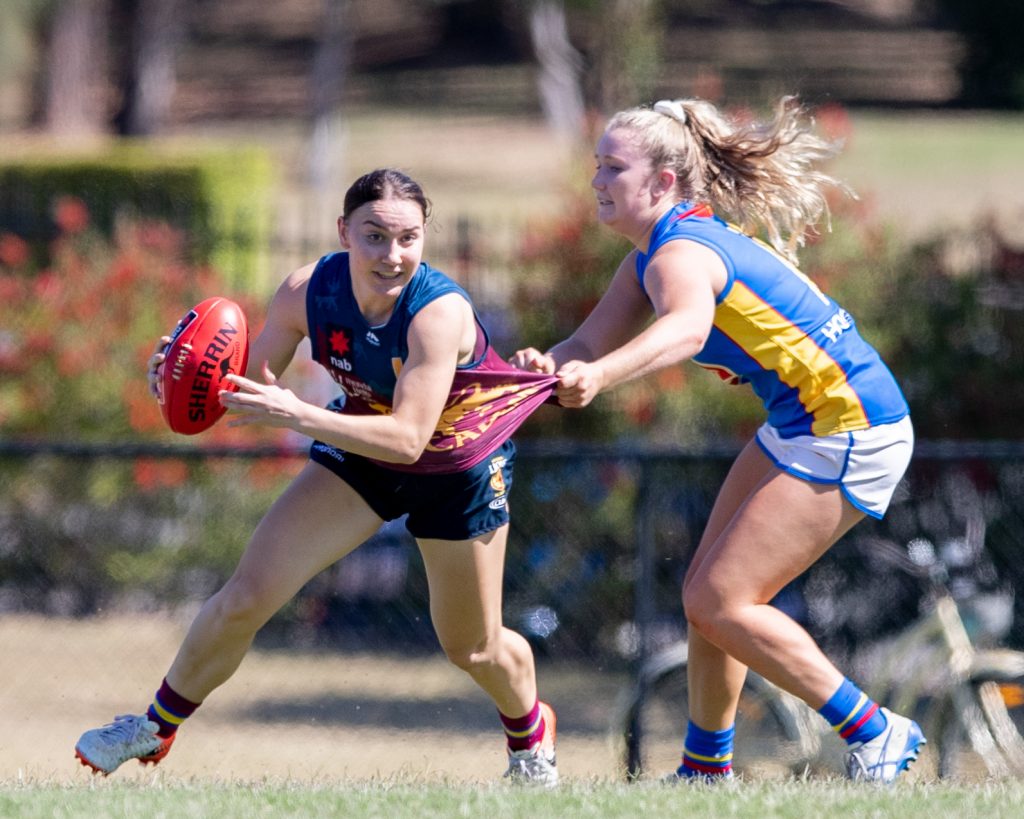 CLASS was the word of the day for Bond University’s Mikayla Pauga during their clash against Aspley a fortnight ago. Pauga kicked three in a best on ground performance, but her performance was so much more. She created opportunities for teammates inside Bond’s forward 50, worked hard to help in defence and was smooth around the stoppages, constantly getting a desperately needed clearance for her side. This was all against a quality opposition, who struggled to contain her as she found her way around the ground with ease. On top of the three goals she kicked herself, she also set up plenty of others for her teammates. Whether it was a direct assist through clean hands or proving an integral part of great team ball movement, she seemed to be everywhere, and deserved every bit of her best on ground honours.

The game started in ideal fashion for Bond kicking the opening goal of the game in no time. The second goal came from some excellent hands inside 50. With an errant handball flying over her head, Pauga completed an excellent pickup of a deviating ball before dishing a handball to Annie Muir on the run, who finished with an excellent goal. With the ball locked in Bond’s forward half for a lot of the quarter, Pauga popped up everywhere, from applying constant pressure around the stoppage or winning a two-on-one contest on the wing. She also had the chance to add one more goal for her side, with a nice gather, sidestep and long shot on goal just fading to the right for a behind. Regardless, she looked dangerous all over the ground.

The second quarter started strong for Bond and Pauga. With the ball launched inside Bond’s 50, it kicked off a foot race between Pauga and her opponent. She cleverly toe-poked the ball to the goal square, where teammate Caitlin Thorne simply had to soccer the ball through a metre from the goal line. The play summed up Pauga’s performance on the day; clever, unselfish and attacking. The second quarter also saw Pauga hit the scoreboard multiple times. Chasing the ball inside 50 after a horrendous bounce, she calmly gathered the ball, evaded her opponent and kicked a goal from 25 metres. Bond already had the momentum, and this continued that. She wasn’t finished there, with her second goal on the halftime siren coming from an important one-on-one win and assist from teammate Lily Tarlinton allowing Pauga to chip through the goal from the top of the goal square.

In the third quarter, Bond continued its dominance on the game and so did Pauga. Taking a mark on the half-back flank, she played on, shrugged off a would-be tackler and delivered a 40-metre precision pass to a teammate down the field. She then followed up to receive the handball on the run, evading another tackler and then hitting a teammate lace out on a lead who unfortunately spilled the mark. After Bond locked the ball in their 50 from this play, Pauga was constantly peppering the goals, before finally kicking her third shortly after, finishing some nice ball movement up the field with a fantastic goal on the run from the pocket. Pauga was certainly showing why she was the ‘Riewoldt Family AFL Excellence’ scholarship recipient at Bond.

Spending some more time forward of the ball in the last, she was able to take it back a gear with Bond having an extremely comfortable lead. She was still able to find the ball around the half forward flank, displaying her speed and class that served her and her team so well throughout the game. Overall, an excellent game from the crafty mid/forward, displaying a performance that likely won’t be the last of that caliber.

Pauga and Bond University remain undefeated after the win, and take on reigning premiers Yeronga South Brisbane on Saturday.