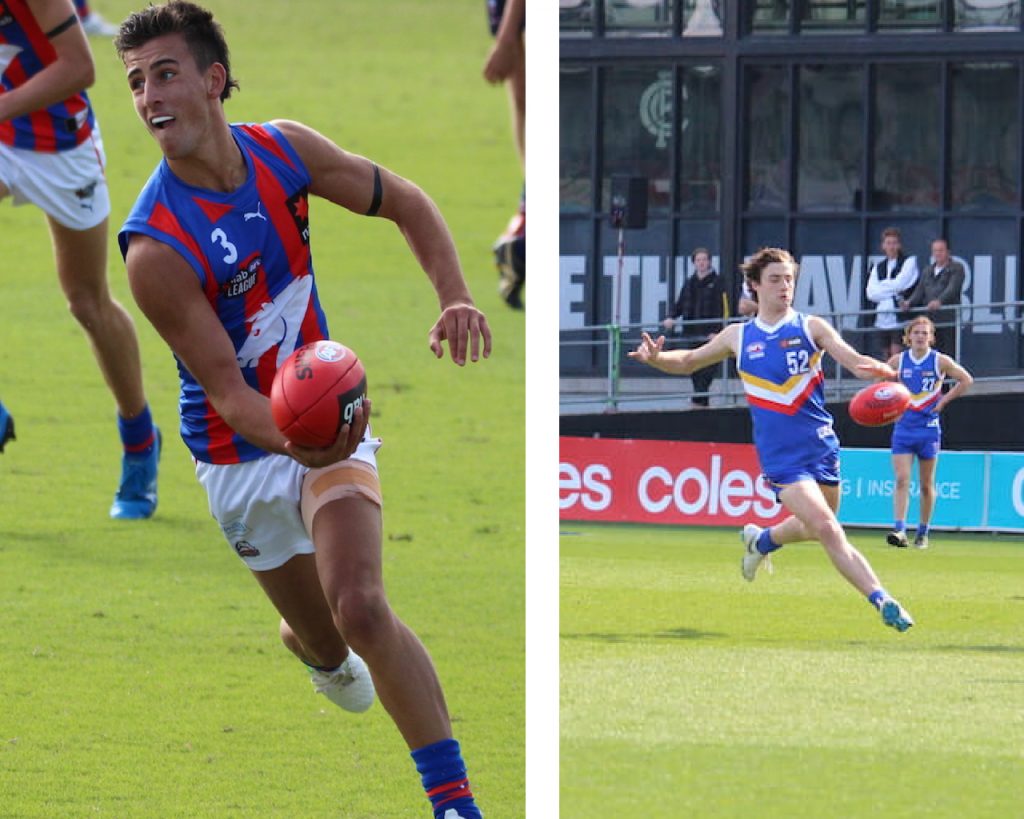 THE 2021 NAB League season rolls on into Round 2 on the weekend, with six games split evenly across Saturday and Sunday. Headlining the matchups is an all-Metro double-header at Preston City Oval on Saturday afternoon, which will be capped by an exciting clash between the Eastern Ranges and Oakleigh Chargers.

In a brand new series, we delve into the most eye-catching head-to-head matchups set to take place during the next round of action, starting with an absolute blockbuster. Having earned co-captaincy in the Draft Central Round 1 Team of the Week, top five prospects Tyler Sonsie (Eastern) and Nick Daicos (Oakleigh) are poised to lock horns this week in a mouthwatering midfield battle. Both are also AFL Academy members.

Neither player really requires an introduction, but below are the key points which aim to compare and contrast these two elite talents.

Sonsie already boasts a terrific resume and should be well-known to keen NAB League watchers. The Eastern prospect proved his credentials by taking out Vic Metro’s MVP award at the 2019 Under 16 National Championships, before later earning his Ranges Under 18 debut. He would go on to play six games as a wingman/forward, averaging 11 disposals and a goal every other game while also featuring in the Ranges’ grand final loss to Oakleigh.

Daicos is another name who is already well-hyped, but has seen a touch less top-level exposure through the Victorian talent pathways. His name speaks for itself – the son of Peter and brother of Josh – so Collingwood fans are understandably excited to see their latest father-son prospect. He more than held his own in the APS Football competition alongside the likes of Matt Rowell and Noah Anderson, and was set to join the Chargers’ program last year. Instead, we had to wait until last week for his maiden NAB League outing (it was worth the wait).

Both players had interrupted preseasons but were quite obviously raring to go in Round 1. Sonsie had some back issues at the end of 2020 which carried on into early-2021, but he shook them off to get back up to speed. Daicos went through minor ankle surgery last September and spent some time getting his confidence back in the lead up to his NAB League debut. He did not participate in the preseason testing event, but ran out in a Collingwood VFL practice match and impressed. That form carried on into Round 1.

Both players will predominantly run through midfield this season and proved as much last week. There are some slight differences in their secondary positions, though. While Sonsie is more of a midfielder who rests forward, Daicos is a midfielder who also rolls off half-back and looks to open up play from there. Despite that, we did see Daicos spend a good amount of time up forward in Round 1 after he copped an early leg knock. Both players took full toll during their time inside attacking 50 last week, with Sonsie classily converting two late goals on his non-preferred side and Daicos slotting three majors from a half-dozen attempts.

These two should measure up quite well against each other, with both between 180-185cm and shaping up relatively similarly weight-wise. In terms of style, they bring some real class to the game each time the ball is in their hands and use it brilliantly by hand and foot. They are both so smooth in possession and while they are not overtly strong, can extract and come away from congestion beautifully. Daicos’ half-back work and Round 1 showing point towards having a greater defensive acumen, whereas Sonsie is perhaps a touch more forward-thinking, more often. Like two heavyweights slugging it out in the ring, this bout should be a great watch for the neutral – if you’re not too big a fan of defence.

While breaking the game open is something Daicos can clearly do, one of his goals this year is to do that even more. His bursting clearance at the first centre bounce last week, and work rate to win the ball in dangerous areas points towards that being a factor going forward. He is a team driven player too, so will look to bring his teammates into the game.

As alluded to above, Sonsie is working on his defensive transition and endurance base. While his attacking acumen is so effective, applying that tackling pressure and becoming more relevant going the other way is the next step in Sonsie’s development. He has no trouble finding the ball and slides away from congestion with ease, but will be more inclined to rip away contested ball as he puts on more size.

Daicos – “In his NAB League debut, Daicos showed the hype was justified with a best on ground performance against perhaps the team to beat this year in Sandringham. Daicos was superb in the midfield, winning the ball at will and showing great skill and speed when in possession.

Daicos started the game perfectly with the game’s first clearance and showed his forward craft, kicking a well-struck set shot from 45 metres out. His second goal came from a set shot from 50 metres in the third quarter, and his third and final goal came in the last quarter with a terrific crumbing effort where he hit the ball at speed and kicked the goal quicker than a hiccup.

With an early corky, Daicos had to spend a bit of time at deep forward in the second half but he still looked so damaging whenever he went near the ball. Daicos finished the game with 28 disposals, eight marks, seven tackles and kicked 3.2 in a best on ground performance.” – Ed Pascoe

Sonsie – “Sonsie reminded everyone why he is considered one of the top five prospects in the 2021 draft with a dominant display in the midfield, showing his trademark attacking nature and class in a strong four-quarter performance. Sonsie was a clearance specialist in the first quarter, winning plenty of the ball in-close and dishing off cleanly by hand. It wasn’t his usual style of winning the ball and attacking by foot, but he was effective nonetheless.

Sonsie had a few running shots on goal in the first half and didn’t quite nail them as he usually would, biting off a bit more than he could chew with some opposite foot kicks, but he would address those issues in the last quarter. Sonsie is usually flawless in his kick execution on both sides and it all finally clicked in the last quarter as he kicked two sensational goals on his non-preferred.

The first was a classy rove and snap from a stoppage and the second came after he won a centre clearance and then followed that very clearance up with a running shot at goal from 40-metres out. Sonsie put on a show, finishing the gamer with 34 disposals, six inside 50s and two goals.” – Ed Pascoe

This battle looms as a much-watch for draft followers, with two potential top five picks set lock horns while they look to be in scary form. The match itself should also be a ripping contest, with Eastern coming off a win and Oakleigh keen to rectify its Round 1 loss to Sandringham. Should Daicos be fully over the knock he sustained last week, he will likely get a massive run through midfield once again, right alongside the irresistible class of Sonsie.