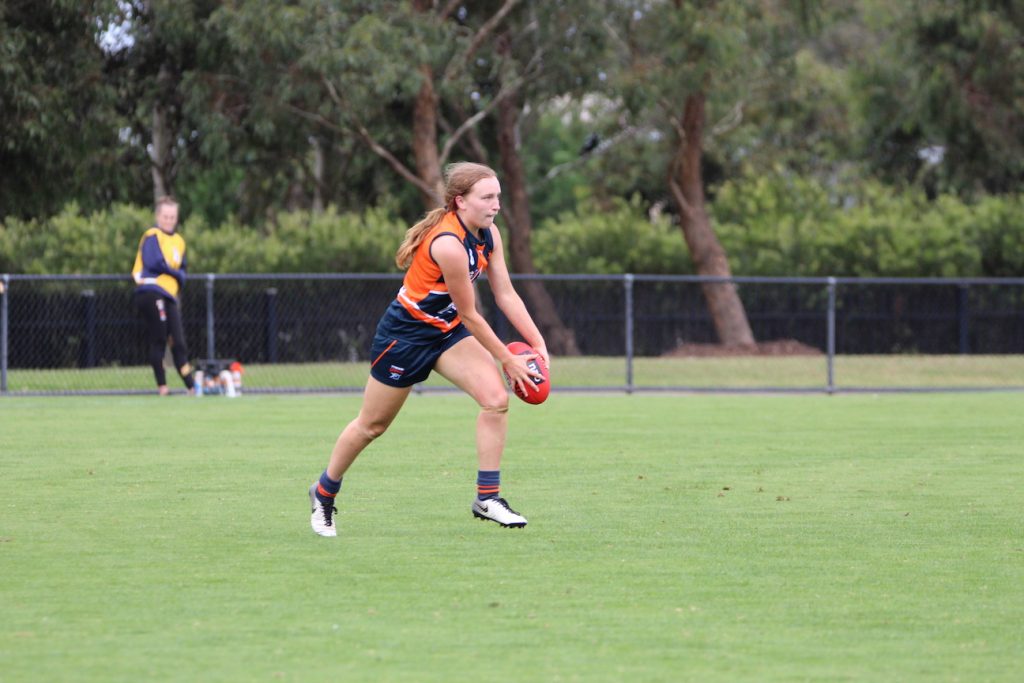 ROUND 6 of the Victorian Football League (VFL) Women’s competition commences tomorrow with a number of AFL Women’s and NAB League Girls players entering the competition for the first time this season.

In a battle between a couple of traditional rivals, Essendon will travel to Box Hill to take on Hawthorn in what is anticipated to be a great clash for the sides early tomorrow morning. The Hawks have been bolstered by Eastern Ranges talents Jess Grace, Isabelle Khoury, Eloise Chaston and Ruby O’Dwyer, with the likes of Jemma Owen, Amy Malander and Chloe O’Malley among the outs. Calder Cannons and Vic Metro representatives Kasey Lennox and Zali Friswell come into the Essendon side, as Elisabeth Hosking also returns to the team with an extended bench. The Bombers can put pressure on the top four sides with a win, and will leap frog one side with a victory, given third and fourth placed Geelong and Casey Demons do battle later in the afternoon.

With the AFL Women’s season over, Southern Saints have brought back some serious talent into its VFL Women’s side to try and rejoin the top half of the table with a third win this season. Both sides sit at 2-3 from five rounds, and the likes of Alice Burke, Molly McDonald, Jacqui Vogt and Poppy Kelly all coming back into the team, with Nadia von Bertouch, Melanie Bertuna and Tamara Luke are among the outs. For the Seagulls, Paige Nash and Elizabeth McGrath return into the side, as Asha Price and Chloe Leighton are among those out of the team for this match. If the Seagulls get up, they will then overtake the Saints on the table and balance their own ledger at 3-3.

Back at their spiritual home ground at Arden Street, North Melbourne will eye off going back-to-back for the first time this season if they can get past the winless Darebin Falcons. The. Roos have opted to keep a relatively VFL-focused outfit with Laura Amelung, Olivia Woods and Nadia Moore into the time, as Tahni Nestor and Allies representative at the AFL Women’s Under 19 Championships Jayde Hamilton go out of the side. For the Falcons, Sidney Cubasch will slot straight back into the ruck, whilst Nicole Callinan is another important inclusion in defence. North Melbourne will start as favourites, but both sides have a chance in this one.

Two sides utilising the return of AFL Women’s talent, the unbeaten Port Melbourne will hope to make it six wins on the trot against a Western Bulldogs side desperately hoping to avoid a fifth straight loss. The Borough have welcomed in Richmond tall forward Sabrina Frederick, as well as Tiger talents Laura McClelland and Sarah Sansonetti. Oakleigh Chargers’ Taylah Morton will also run around in the forward pocket, while Luka Lesosky-Hay, Hannah McLaren and Phoebe Monahan are among the outs. For the Western Bulldogs, Isabelle Pritchard, Gemma Lagioia and Annabel Scott return to the team replacing fellow AFL Women’s listed players Bailey Hunt and Annabel Strahan. GWV Rebels midfielder Lilli Condon will make her debut for the Western Bulldogs, whilst Western Jets’ Nikita Wright also returns to the side.

Whilst most sides are able to welcome back some AFL Women’s talent, the still-alive Melbourne AFL Women’s side does not have that luxury, instead having to use their depth against a Geelong Cats side that has brought in some young guns for the Casey Fields clash. Carly Remmos, Georgie Rankin, Madisen Maguire, Darcy Moloney and Laura Gardiner are all named in the team to inject some serious talent in the midfield and around the ground, while Madeleine Boyd and Stephanie Williams are among the outs for the Cats. The Demons have recalled Georgia Howes and Monica Haraimiuk among others, while Niamh McEvoy, Grace Buchan, Maggie Caris and Chantelle Emonson are all among the outs for the home side.

Traditional rivals Collingwood and Carlton do battle in a standalone clash at Victoria Park on Sunday with both teams making a host of changes. The Magpies are also still alive in the AFL Women’s competition and have lost the listed Kristy Stratton, whilst recalling Abbi Moloney as well as Eastern Ranges’ Olivia Meagher among a host of ins. For the Blues, Winnie Laing is out of the side, but Carlton-listed Charlotte Hammans and Maddy Guerin are returning to the side with Marnie Jarvis and Jasmine Ware in what will be a game the Blues eye off as a way to continue their form of late and record their fourth win. Sitting equal top with Port Melbourne, the Magpies will want to maintain the gap on the chasing pack below them with a victory.