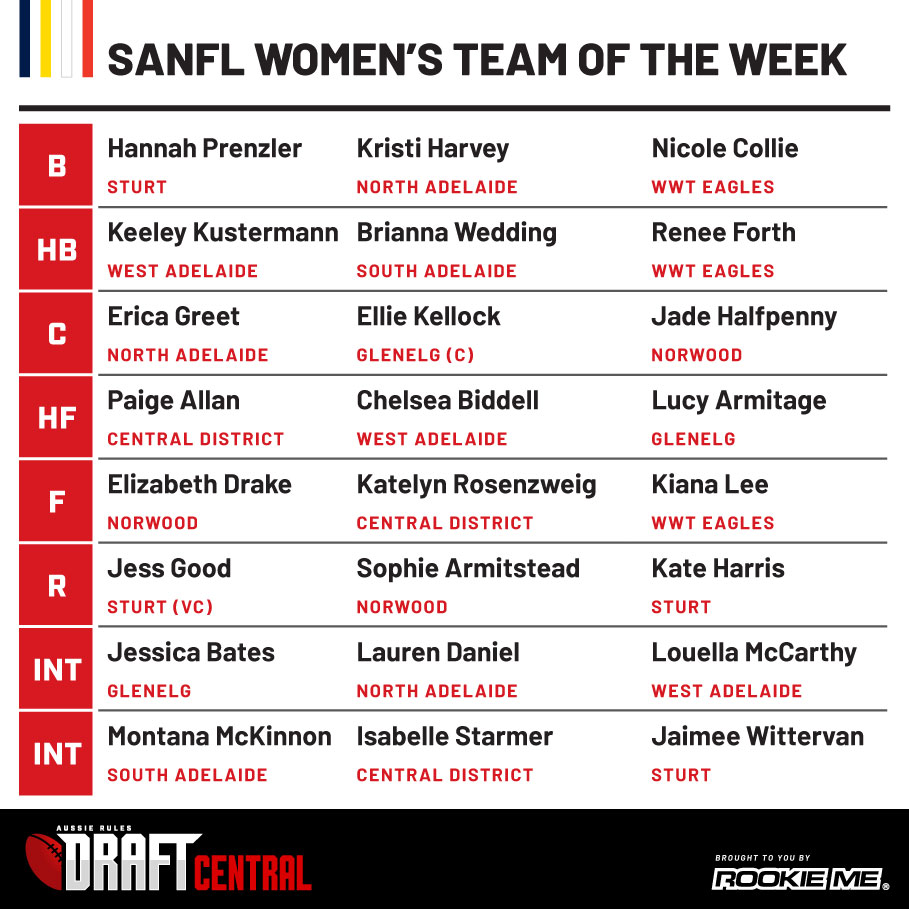 STURT has come away with a league-high four players in the Draft Central South Australian National Football League (SANFL) Women’s Team of the Week for Round 6, in what was an even spread across the competition. Six of the eight sides followed suit with three players apiece, whilst South Adelaide had the two players in for the week.

The Double Blues had a dominant midfield in the draw with Glenelg, and the likes of Kate Harris and Jaimee Wittervan both feature in the Team of the Week. Ruck Jess Good was named vice-captain in the team for her season competition-high 46 hitouts, whilst Hannah Prenzler returned from captaining her state to have a great game in defence. The captain of the side was on the opposition team, with the Bays’ Ellie Kellock named in the centre, while Lucy Armitage and Jessica Bates also made the side. Madisyn Freeman came close to making it in, named as an emergency for Round 6, alongside another Sturt talent in Isobel Kuiper.

West Adelaide had the next most players across the 27 players named, with three players in the Team of the Week, and an additional emergency as well. Keeley Kustermann and Chelsea Biddell earned starting spots up their respective ends, as Louella McCarthy made her way onto the bench. Ailish Considine earned her place as an emergency for Round 6. South Adelaide only had the two players made the side this round, with key position talents, Brianna Wedding (defence) and Montana McKinnon (ruck) both standing up in the loss to earn their places in the side.

Central District’s big win over North Adelaide saw Paige Allan enter the team for Round 6, whilst Katelyn Rosenzweig made the side once again at full-forward. Another first-time Team of the Week member in Isabelle Starmer was named on the bench representing the Bulldogs. Despite the defeat, North Adelaide still had three Roosters in the team, as Kristi Harvey once again locked down full-back for the sixth consecutive week. Erica Greet (wing) and Lauren Daniel (interchange) also earned their spots in the side after strong performances.

In the final game, Norwood’s Sophie Armitstead rounds out the onball group after a standout performance, while Jade Halfpenny stood up in crucial moments to be named on the wing after playing forward and onball, while Elizabeth Drake booted two goals and was named in the forward pocket. Their opponents Woodville-West Torrens Eagles had a couple of defenders in Nicole Collie and Renee Forth slotting in the back pocket and half-back after their defensive efforts, while Kiana Lee was strong overhead up forward to earn a place in the team.

DRAFT CENTRAL SANFL WOMEN’S TEAM OF THE WEEK: ROUND 6