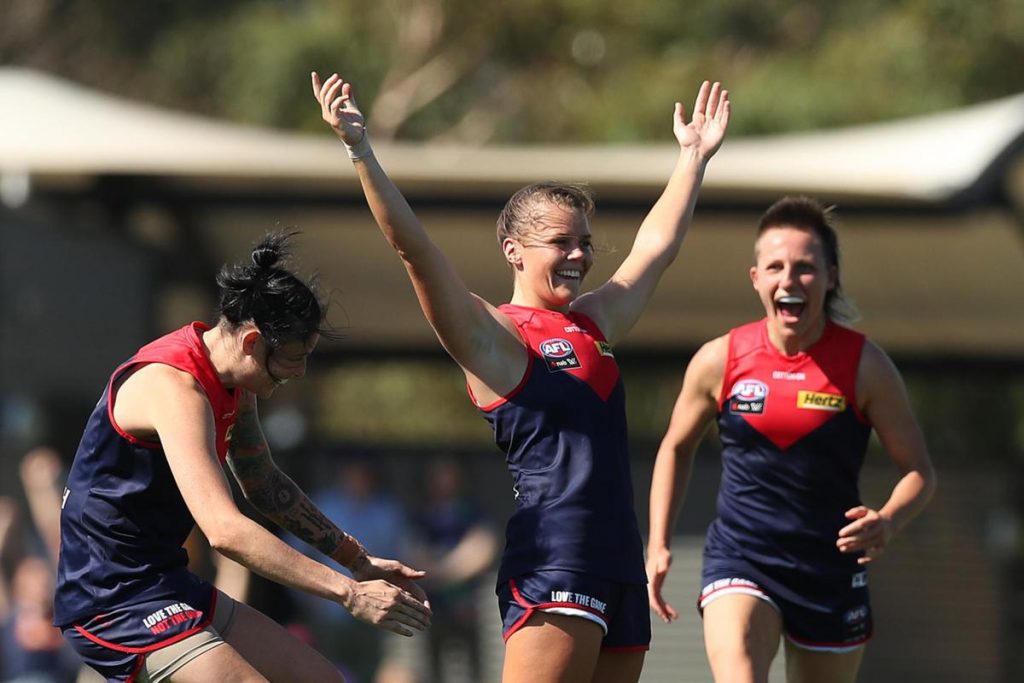 MELBOURNE has earned a chance at toppling two-time AFL Women’s premiers Adelaide in the preliminary final next weekend after defeating Fremantle by 17 points at a windswept Casey Fields yesterday. The Demons kept last year’s minor premiers goalless in the first half, then held on the second half despite some inaccuracy, to win, 5.10 (40) to 3.5 (23). Despite a phenomenal effort from Kiara Bowers with a Bowers-like tackle count of 17, the Demons put together a strong team effort across four quarters to advance through to the penultimate week of the 2021 AFL Women’s season.

After a couple of behinds early in the match, the Demons’ first selection in last year’s draft Alyssa Bannan got them on the board midway through the term, and whilst the Dockers had a couple of chances late in the quarter, could not capitalise and trailed by a straight kick at the first break. Shelley Scott was quick to pile on another major for the Demons, needing just 36 seconds from the restart to slot through the home team’s second goal, and the lead was out to 12. Scott doubled up five minutes later with her second and the Demons’ third, and when Eden Zanker missed a chance, the lead was out to a game-high 19 points at the half. Fremantle was unable to add to its quarter time score of two behinds, and the danger signs were there.

Fremantle had the first chance of the second half through Gemma Houghton, but she scored her second behind of the contest two minutes into the quarter, before Ashley Sharp broke the Dockers’ drought with a crucial major in the fourth minute of the premiership quarter. That cut the deficit to 12, and it did get as low as a 11 points midway through the quarter, before Brenna Tarrant – who had kicked five majors in her VFL Women’s debut earlier in the year – snagged a goal and the Demons had one foot in the preliminary final. Sabreena Duffy had other ideas though, and just as soon as the Demons were looking comfortable, she answered with a goal of her own, and the lead was back to less than two kicks. In the dying moments of the third term, Houghton finally found her range with a great goal and the deficit was just four points heading into the final break.

The first goal of the last term was crucial, but for some reason no matter how many chances they had, the Demons could not split the big sticks. Seven consecutive behinds – including one rushed – opened the term, but the ball was effectively locked inside the Demons 50, when the Dockers needed it up the other end for a chance to win the game. Instead, all of those behinds had pushed the lead from four points to 11 with four minutes on the clock. Eventually it would be the crafty Maddi Gay who put the icing on the cake with a terrific goal in the 15th minute to seal the game for the home team and guarantee them another week in the competition. Unfortunately for the Dockers, it meant the end of the road after their premiership aspirations were cut short last year due to the league cancellation, and now they will head back to go again in 2022. For the Demons, they will take on a red-hot Adelaide in South Australia next week, with the winner to book a place in the 2021 AFL Women’s Grand Final.