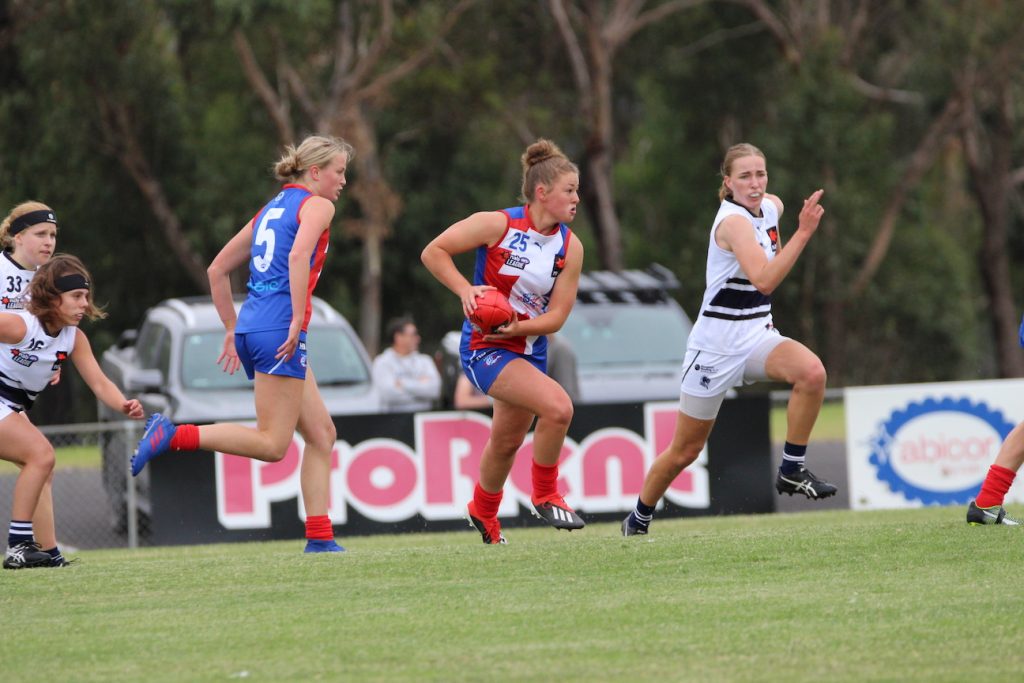 VIC Metro and Vic Country have named their Under 17 squads ahead of today’s 2021 AFL Women’s Under 17s Championships. The sides will play twice, with the first being at Trevor Barker Oval, and the second being a yet to be confirmed date in May. The game today will start from 10am, with a stream via the AFL Women’s website.

Oakleigh will lead the Metro charge with six representatives, ahead of Western Jets and Sandringham Dragons with five and four respectively. The sole Metro Under 17s player selected in the Under 19s squad for Game 1 was Montana Ham, while Jets’ teammate Charlotte Baskaran, as well as Sandringham Dragons duo Bridie Hipwell and Sofia Hurley, and Calder Cannons’ Abbey McDonald were also named in the extended Under 19s team. Among the 2005-born players (2023 draft-eligible) are Eastern Ranges duo Alyssia Pisano and Laura Stone, Northern Knights’ Ava Jordan and Western Jets’ Kiera Whiley.

Dandenong Stingrays unsurprisingly have the most of any side, with so much bottom-age talent filtering through, they make up almost a third of the Vic Country team. Seven representatives will don the ‘Big V’, while Bendigo Pioneers and Geelong Falcons have four apiece. Gippsland Power, Greater Western Victoria (GWV) Rebels and Murray Bushrangers round out the list with three apiece as well. Of the players also on the Country Under 19s list, Bendigo Pioneers’ Octavia Di Donato and Murray Bushrangers’ Keeley Skepper. An Under 17s talent – GWV Rebels’ Kalani Scoullar was also included on the Under 19s list.

All those on the Under 19s lists are naturally ones to watch, whilst outside of those, of the top-agers in the Under 17s grade, Western Jets’ Paige Ryan and Krystal Russell, Sandringham Dragons’ Keely Coyne, Oakleigh Chargers’ Charlotte Taylor and Mia Clift and Northern Knights’ Brooke Plummer have been in good form this season, whilst Gippsland Power’s Lily-Rose Williamson and Yasmin Duursma, Geelong Falcons’ Charlotte Simpson and Ash Van Loon, Bendigo Pioneers’ Tegan Williams, Dandenong Stingrays’ Felicity Crank and Brooke Smith, and GWV Rebels’ Molly Walton are among the names to keep an eye on from Country

Note: Montana Ham has been selected for the U19s match