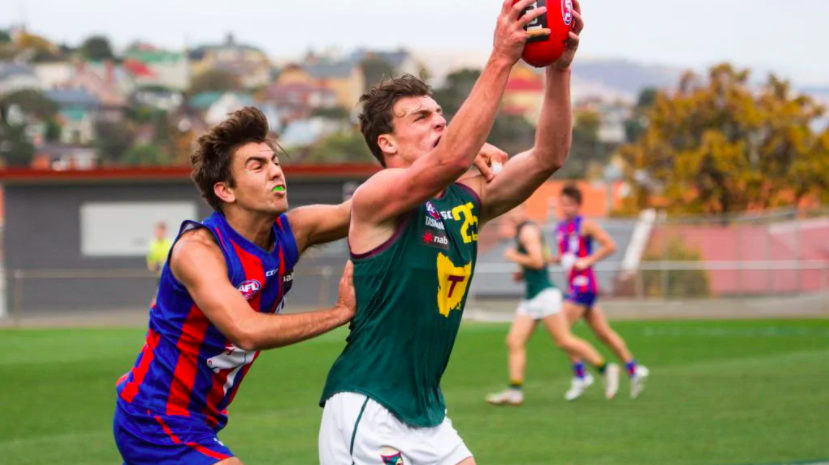 IN a Draft Central first, we have streamlined a look across the nation with a number of state leagues returning to action over the Easter long weekend. Competitions in South Australia, Western Australia, Tasmania and Queensland all kick-off over the weekend and we preview them all in one convenient preview. At the time of publishing, only the South Australian and Tasmanian teams were out, with our West Australian and Queensland previews to come.

Tasmanian key forward Jackson Callow will be one to watch for Norwood tonight as they host Port Adelaide returning to the competition after a year off due to the COVID-19 restrictions regarding AFL non-selected players in state leagues. With ex-Geelong talent Jacob Kennerley and ex-Swans tall Michael Knoll returning to Coopers Stadium, the home team will be hard to beat. For Port fans, they will get a glimpse at recent draftees, father-son prospect Taj Schofield and key forward Ollie Lord, whilst the likes of Dylan Williams and Joel Garner are also named in there.

Speaking of ex-AFL talent, South Adelaide has bolstered its list with no bigger name than ex-Crow and Blue, Bryce Gibbs joining the Panthers. He joins ex-Cat Jake Tarca and ex-Lion Sam Skinner, whilst former State Under 18s player Damon Frietag has also joined the cause, Potential number one pick Jason Horne is the player many will turn in to watch, named on the bench to start 2021. Their opponents Adelaide is in the same boat to the Port Magpies, returning to the competition for 2021. Next-Generation Academy (NGA) member Tariek Newchurch is an exciting talent to watch named off half-back, with AFL-listed Crows Jackson Hately, Riley Thilthorpe and Fischer McAsey alongside another NGA draftee in James Borlase. Thilthorpe being named on a wing will be an interesting one to watch, showing off the 200cm key position player’s versatility.

Looking to the other Good Friday clash between Central District and North Adelaide, GWS GIANTS’ Academy member Harry Grant has crossed to the Dogs, with Tom Graham stepping up to League level after plying his trade with the Reserves following a 2019 premiership with Oakleigh Chargers in the NAB League. Tasmanian Aiden Grace arrives from Glenorchy, whilst the Bulldogs brother-duo of Travis and Jarrod Schiller will find plenty of the ball. Lachlan Grubb and Lewis Cowham are among the ones to watch in the Reserves side. For North Adelaide, reigning Margarey Medallist Campbell Combe will look to get his season off to a perfect start, with ex-Power and Suns talent Aaron Young joining the team, and former Under 18s state representative Dyson Hilder at full-forward.

In a mid-afternoon game at Maughan Thiem Kia Oval, the Eagles will unveil ex-Crow Riley Knight, as well as former Central talents Daniel and Troy Menzel for their clash against Sturt. James Tsitas has remained in South Australia rather than head back to the VFL, while Kobe Mutch will complete a dominant midfield hoping to get back on an AFL list after his time at Essendon. Ex-Crow Patrick Wilson will don the Double Blues colours in 2021 and is straight into the midfield, with former Under 18s state representative Josh Shute also in the side for his League debut. Jordan Houlahan and Zane Kirkwood will once again be keen players for the visitors.

In the final game of the round, Glenelg hosts West Adelaide tomorrow evening. The Tigers have brought in two ex-AFL talents in former Swan Toby Pink, and North Melbourne tall Sam Durdin. Both will provide great versatility around the ground, and back-to-back leading goalkicker Liam McBean will start off another season back at full-forward. Margarey Medallist from a couple of seasons ago Luke Partington will return again for the Bays, as Cooper Horsnell could be among a number of junior players to step up to League level in Round 1. For West Adelaide, Kieren Lovell has joined the side after a stint with Tigers in the TSL last season, while Tom Murphy has been named in the side after his stint with North Melbourne. Josh Gore will be a very handy goalkicker inside 50, while over-age draft prospect Jye Sindeberry has been named at centre half-back for the match.

Looking down on the Apple Isle, the youth of the competition will be reduced when Tasmania Devils enter the NAB League competition after it was cancelled in 2020. Nonetheless, there are still some good young talents to keep an eye on, and established players who will stand up.

North Hobart kicks off its campaign against Tigers in what should be a fascinating contest. Youngsters Jye Menzie and George McLeod are among the ones to watch for the Demons, as they hope to topple a Tigers side that has lost key ball winner, Kieren Lovell to the SANFL. Lachlan Gadomski remains an important tall for the Tigers, with Sam Duigan a key inclusion for the Kingborough-based side.

In a massive 2020 Tasmanian State League Grand Final rematch, the two Launceston sides go head-to-head with North Launceston up against reigning premiers, Launceston. Young midfielder Ollie Sanders will play a crucial role on the inside, with plenty of chances over the off-season for the Northern Bombers, though Jay Foon and Brad Cox-Goodyer remain among the top players in the side, and Angus Jeffries another teenager to keep an eye on in 2021. Launceston will have its forward line combination of Jay Blackberry and Dylan Riley, as Jake Hinds will line-up again in midfield for the team.

The other match for the weekend is Lauderdale up against Clarence. The Bombers will welcome Allen Christensen to the side, with the ex-AFL livewire named in the middle, team up with Sam Siggins in there. Clarence have a ton of youth on display, led by last year’s Rising Star in Ollie Davis back again, alongside Ethan Jackson, Darcy Gardner and Noah Holmes among others looking for a good 2021 season in the red and white.

Just the one match this weekend in a standalone clash between new Queensland Australian Football League (QAFL) newcomers Noosa Tigers, and Wilston Grange Gorillas. The match, set to be played at Rococo Oval in Noosa, will have a 2pm start if it goes ahead. With much uncertainty around the COVID-19 outbreak in Queensland, there is yet to be confirmation the match will go ahead. The teams are also yet to be named due to the uncertainty around the outbreak.