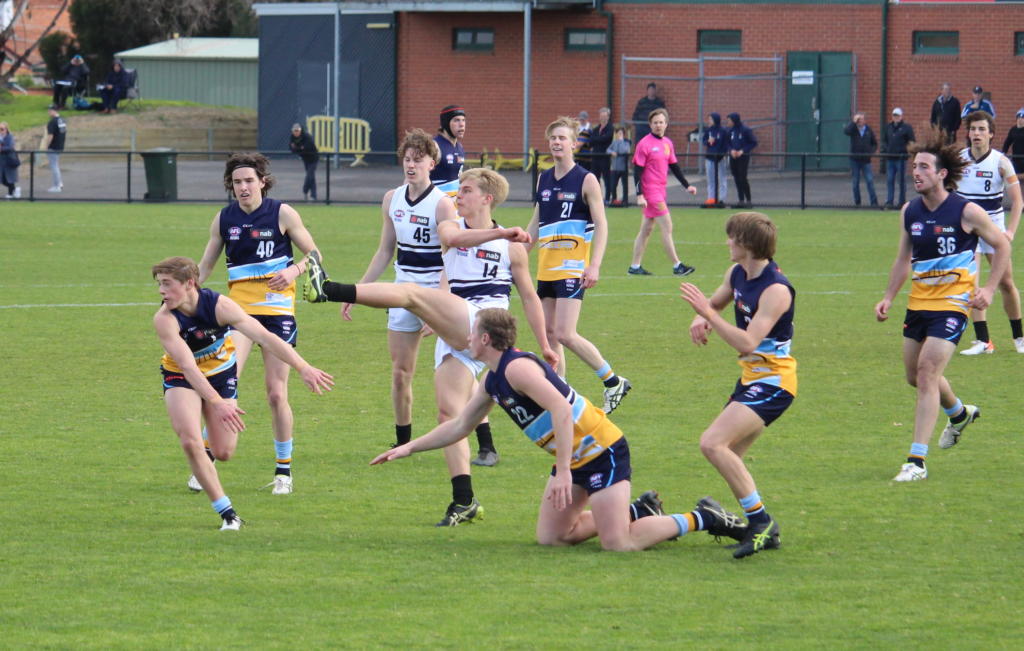 NORTHERN Knights coach Leigh Clarke is encouraging his players to identify their “superpowers” as they prepare to return to competitive action on Friday afternoon. After over 550 days away, the Knights will take on Western Jets at Highgate Recreation Reserve and Clarke says most players have turned the time off into a major positive.

“The boys have presented in the best condition I’ve ever seen in terms of their running capabilities,” Clarke said. “Having a kick or a run with one mate was all they could do there for two or three months, but a high-90s percentage of them took the opportunity and have come back in really good condition.

“Being able to clock off 2km time trials that are pushing draft combine sort of levels, it’s a big, big credit to them to be able to back themselves away from the bright lights of pathway training, doing it in the dark and out on their own, so all credit to them.”

As for the superpower theme, it means the Knights will be a side sure of their greatest strengths.

“We’re talking a lot about superpowers at the moment,” Clarke said. “To understand, be clear and direct, be able to look people in the eyes and say ‘my superpower is x’. Have one and that’s it, there’s no debating, you know what your superpower is and you stand on your own two feet and can put that out in the open.

“We’ve got some time to work on all the stuff that’s at the back of the shop, but right now we want to focus on the things they do really well that we want to display that at the front.”

Allowing players to showcase their draftable qualities will also seep through the Knights’ style of play. Clarke says there is “no Da Vinci code” to how teams will look to move the ball, but that there will be similar styles with unique spins on them throughout the competition.

“We always stick to the fundamentals but the (players) have been able to pick up things pretty quickly in terms of how we want to move the ball,” he said. “We’re all following a similar path, we’ve just got various ways of teaching it. Our boys want to play a really exciting brand of footy that should display their draftable talent, so that’s a great starting point for us to be in.”

The region has also taken the approach of backing “character first” in 2021 as the NAB League top age moves up to 19. While like all regions, there are more 19th-year prospects on the list than usual, Northern is also looking forward to welcoming its Under 17 talent to the level once their carnival is completed.

Looking at the Knights’ most outstanding draft eligible talents, Ewan Macpherson is a top-ager with plenty to prove in 2021. The Western Bulldogs father-son prospect missed out on being drafted last year, but spent time with the Bulldogs pushing for a final list spot. The inside midfielder/defender has clean skills and should also feature in the VFL this year.

Tall utility Liam Kolar is another who went close to being picked up as an 18-year-old, but returns to the NAB League to get some more experience under his belt. Having come from a soccer and athletics background, Kolar is a likely type who combines speed and endurance as a key forward or even up on a wing.

He is currently being nursed back to full health though, having rolled an ankle while running out in a Carlton VFL practice match. Carlton NGA talent Regan Uwandu looms as another cog from the starting squad who is being managed back and will likely miss out for Round 1 with a foot injury.

Jackson Bowne is a livewire who will likely catch the eye too, while Ben De Bolfo is an emerging player who is relatively new to the program. The latter has taken up vice-captaincy behind Joel Trudgeon, a fellow 19th-year player who Clarke says is held in high regard by both his coaches and teammates. He is the brother of Carlton AFLW forward, Paige.

Rounding out the leadership trio is Joel Fitzgerald, an exciting 2003-born talent. Among the other 18-year-olds to watch are Josh Ward, Jack Rossimel, and Ben Long, who should feature prominently in the navy, black and white. There are some father-son prospects to keep AFL fans occupied too, with Macpherson, Jackson Archer (son of Glenn), and Mackenzie Hogg (son of Matthew) all rising the ranks.

Northern and Western are up second in Friday’s all-Metro double-header at Craigieburn, which should prove a good tested given the Jets already have a win on the board in 2021. While there may be plenty of cobwebs to be blown out, watch for the Knights’ superpowers to come to the fore this season.