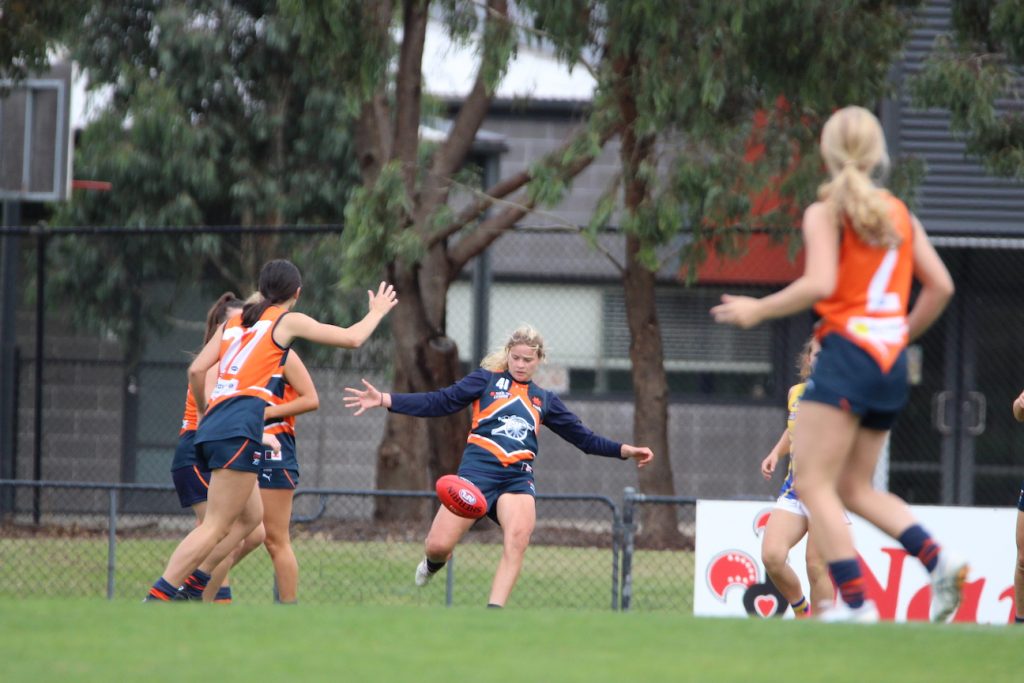 FOURTH in our 2021 AFL Women’s Under 19 Championships state preview series is Vic Metro, a side with some elite talent, great talls and plenty of ball-winning players who can fill multiple roles across the ground. They have opted for a draft-eligible focus, with just one bottom-ager named in the squad for the clash against Vic Country.

The youngest player in the Vic Metro squad is the sole bottom-ager in Montana Ham. One of the top talents for next year, the tall inside midfielder earned a spot in the squad for the first match, and will join an unbelievable inside midfield with plenty of height. The noticeable aspect about the Metro side is the fact it has given a few 19-year-old players a chance, with a particular focus on hardened ball-winners and key position players at both ends. Amanda Ling, Maeve Chaplin and Chloe Saultry all provide extra experience, whilst Tarrah Delgado has been a rock in defence this year.

A player who has had her name in lights for a few years now since booting seven goals in a game against the GWV Rebels as an Under 16s talent in 2019, and her sister Madison winning just about every award possible at AFL Women’s level in her first two seasons. Prespakis has power and speed that makes her difficult to combat, and she can play up forward or through the midfield, with some of the safest hands overhead. Her strength around the contest is terrific, and she has quick hands to dish the ball out to teammates. Not afraid to the take the game on, Prespakis has impressive athleticism and creates her own space, with the opposition always trying to restrict her movement and impact.

Another family-relation as sister to Sydney Swans’ James, Rowbottom is that prototype midfielder who is tall, strong and able to move well out of the stoppage that makes her a headache for opposition midfielders. Rowbottom often plays predominantly midfield, then will be thrown forward when her side needs a clutch goal, and she has delivered on multiple occasions, including in the one-point win over Dandenong Stingrays when she slotted two majors at opportune times. Not needing a lot of touches to have an impact, she still manages to find around 20 touches and kick a goal or two a game, and expect her to start midfield and rest forward with opposition sides worrying about an appropriate matchup.

Considered the premier Victorian ruck as the sole AFL Women’s Academy ruck from the state, Gillard has also proven she can play key forward or key back, with her height and overhead competitiveness impressive. Most impressively her work around the ground – she can find a fair chunk of the ball for a tall – makes her work over opposition rucks, and be a link in transition. Teammates are not afraid to give her the ball and let her dispose of it, with a long kick and good footy IQ that makes her a top talent. One who will role through the ruck and then rotate forward in tandem with Georgia Campbell.

The fourth AFL Women’s Academy member in this side and on the list, Appleby provides the ying to Prespakis and Rowbottom’s yang, as an outside ball-winner and silky mover. Appleby plays off a wing, though she can also play at half-back, because she is not afraid to take grass and run with ball-in-hand. She weaves in and out of opposition players, has lovely skills and decision making, and is the player teammates want the ball in the hands of going forward. She is not a huge possession winner like her fellow midfielders, but is also one that can do a lot of damage both through her metres gained, and her ball use.

With so many great players, it is hard to single just one outside of the AFL Women’s Academy quartet. Reid has really put herself up as one of the top prospects in 2021, and her versatility to roll through the midfield, at half-back or half-forward is terrific. Whilst it is not known if she finds the ball or the ball just somehow finds her, Reid can rack up a large amount of touches, and is so balanced with her use that she can do some serious damage when given an inch of space. She is a ball carrier as well, and is not afraid to go for a run, and if she plays on a wing opposite to Appleby, it will present a star-studded midfield across the board. Having so much inside talent in there, Reid will be the outside class.

Vic Metro has an unbelievable midfield with all of the above likely to start there. The experience of Chaplin and Ling provide extra hardness, while Emelia Yassir – one of the top prospects outside the above – is one that can be versatile in her work, and Bridget Deed another inside ball winner. Jorja Livingstone will add some more outside class, while the defensive set-up is quite strong with Kasey Lennox and Delgado having the rebounding work for talls, and Cadhla Schmidli also getting a great opportunity in the back 50 with the tight group. Neve Crowley is a key position talent to watch for and will likely start forward, while Keeley Sherar and Pia Staltari are having great seasons, and Zali Friswell is among the top talents running around.

The midfield contains the two top prospects in 2021, as well as one of the standout rucks across the competition. Add in a couple of highly-rated talents not far behind Prespakis and Rowbottom, and the outside silk on the wings, and the balance and depth rolling around is phenomenal. The big question mark will be about how to fit all those midfielders in there, with many of them having to play roles off flanks at either end, and then just have heavy rotations. Their balance between being offensive and defensive is very impressive though, and many of them are capable of slotting into other roles.

In terms of its talls, Vic Metro has a very impressive spine, and with Campbell able to roll from the ruck to full-forward as well, and Ham capable of playing midfield or forward, there are no shortage of talents. Kiana Lynch and Brooke Vickers are a couple of names yet to be mentioned who can play anywhere on the field, though have been terrific in defence in the last couple of weeks, while Charlotte Ryan and Eliza James are also consistent players who can impact the contest.

Vic Metro is going to be a difficult team to beat, and whilst in our Vic Country preview we said Country is the team to beat, Metro will be right up there with them. They have the midfield and key position talents to stretch any opposition side, with the question mark coming over specialty forwards or defenders, as a number of midfielders will float into other roles. As a whole though, they have great inside and outside players who will win plenty of the pill and provide scoring opportunities.