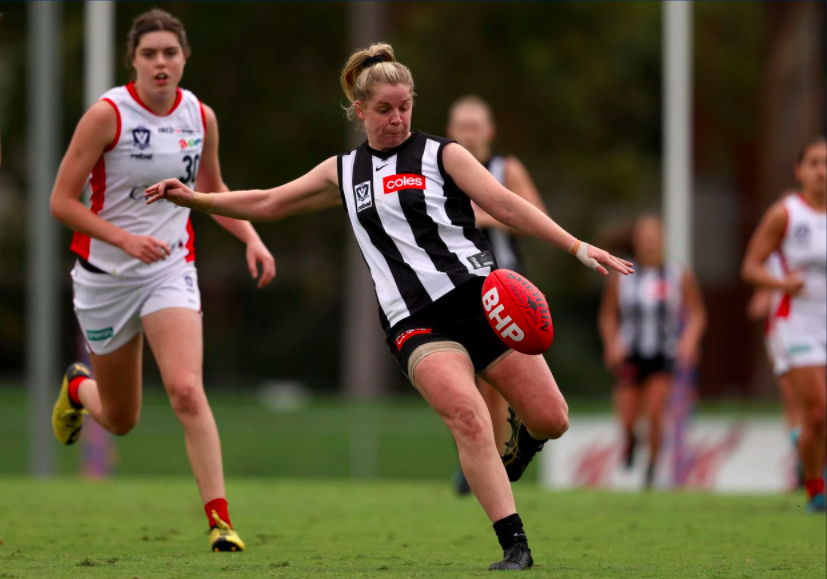 THE Victorian Football League (VFL) Women’s returned for Round 4 on the weekend, with another six enthralling fixtures spread over Saturday and Sunday. As the season runs concurrently alongside that of the AFLW, top-flight players from Victorian clubs who miss out on senior action will be able to run out for what are effectively reserve sides in the VFLW. Round 5 saw promising elite level talent scattered across the eight aligned teams, as some players stake their claims for call-ups ahead of finals.

Competition for spots at Collingwood and Melbourne will continue to be tight heading into finals, after the Magpies and Casey went to battle on Saturday morning. Kristy Stratton was the standout across both sides, booting three goals in black and white after her standalone senior game last week. Meanwhile, Abbey Green marked her maiden 2021 outing with a goal. For Casey, promising ruck Maggie Caris joined Niamh McEvoy in the votes, as first year midfielder Megan Fitzsimon had one of her best performances at any level in the red and blue.

The Southern Saints celebrated a big win over Darebin on the same morning, with a couple of recently delisted Saints among the victors’ best players. Utility Tamara Luke booted a goal and earned votes for her performance, while Nadia von Bertouch continued her solid run in the twos. Both players managed five senior games in 2021.

Carlton’s newfound form yielded another set of points on Saturday afternoon, as the Blues downed Hawthorn at Princes Park. A trio of Carlton goalkickers found the big sticks, with Courtney Jones booting four majors ahead of raw talls Serena Gibbs (two) and Paige Trudgeon (one). 2020 draftee Winnie Laing also got another run in navy blue.

Two sides with some of the most promising young talent around went to battle, as Geelong comprehensively defeated the Western Bulldogs at Whitten Oval. Youngsters Annabel Strahan and Isabella Grant were named among the Bulldogs’ best behind Bailey Hunt, as Danielle Marshall marked her return from injury. For the Cats, Stephanie Williams was lively with two goals as the likes of Georgia Clarke and Maddie Boyd also got more game time under their belts.

Port Melbourne’s perfect run to start 2021 raged on with an 11-point win over Essendon, kicking off Sunday’s proceedings. Richmond-listed key forwards Emily Harley and Cleo Saxon-Jones were both named among the Borough’s best players and booted two goals apiece to combine for four of their side’s six majors.

The round’s final game saw North Melbourne edge standalone side Williamstown at Arden Street, with Tahni Nestor featuring in the Roos’ votes. After managing a stretch of three senior games in 2021, she is one pushing to break back into the top flight as North storms into the postseason.