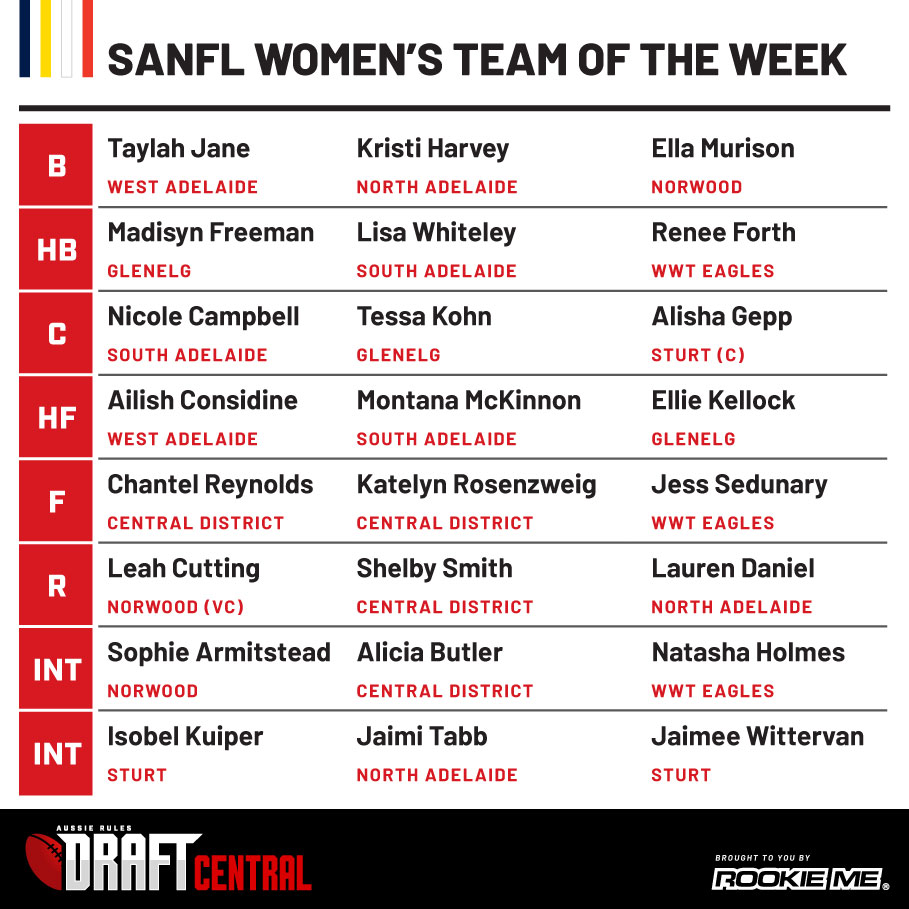 CENTRAL District’s big win over West Adelaide has seen the Bulldogs record the most players in the Draft Central South Australian National Football League (SANFL) Women’s Team of the Week for Round 5. They stood alone in terms of nominations, with their opponents having just the two players, and the remaining six teams recording three players. It was a tough round to select just 24 players with so many terrific individual efforts, as others stepped up in the absence of the competition’s most talented youngsters off on State Academy duties on Sunday.

Central District’s quartet of players includes its two damaging forwards in Chantel Reynolds and Katelyn Rosenzweig who made the side again inside 50. Captain Shelby Smith locked in another spot onball, while Alicia Butler made the team on the bench after an impressive effort in the win. By comparison, the Bloods had the two players with Taylah Jayne slotting into a back pocket, and Ailish Considine at half-forward after kicking two goals in a strong effort. Sharnie Whiting narrowly missed out to keep her streak going of making the team, named as an emergency playing forward in Round 5.

Friday night provided the competition with its first draw, and South Adelaide and North Adelaide also have the same amount of players in the Team of the Week – three. The Panthers had ruck Montana McKinnon in at centre half-forward given Norwood’s Leah Cutting‘s dominance in the centre square, but McKinnon’s work around the ground was phenomenal and needed a starting spot. Also in the side were Lisa Whiteley and Nicole Campbell who are no stranger to Team of the Week. For Norwood, Sophie Armitstead and Ella Murison joined Cutting in the side for Round 5. Teammate Emma Clark was named as an emergency in the hypothetical team.

The Redlegs’ opponents Glenelg also had the three players named in the Team of the Week, with Tessa Kohn in centre, Ellie Kellock at half-forward, and Madisyn Freeman up the other end on the half-back flank. In the final game, both Woodville-West Torrens Eagles and Sturt had three players apiece. The winning Eagles were represented by Adelaide AFL Women’s talents Renee Forth and Jess Sedunary, as well as Natasha Holmes. For Sturt, Alisha Gepp was handed the captaincy after a ridiculous 35 disposals to be the standout performer of the round, while both Jaimee Wittervan and Isobel Kuiper were strong in midfield as well, and  earned spots on the bench. Ruck Jess Good impressed again and earned an emergency spot for Round 5.

DRAFT CENTRAL SANFL WOMEN’S TEAM OF THE WEEK: ROUND 5