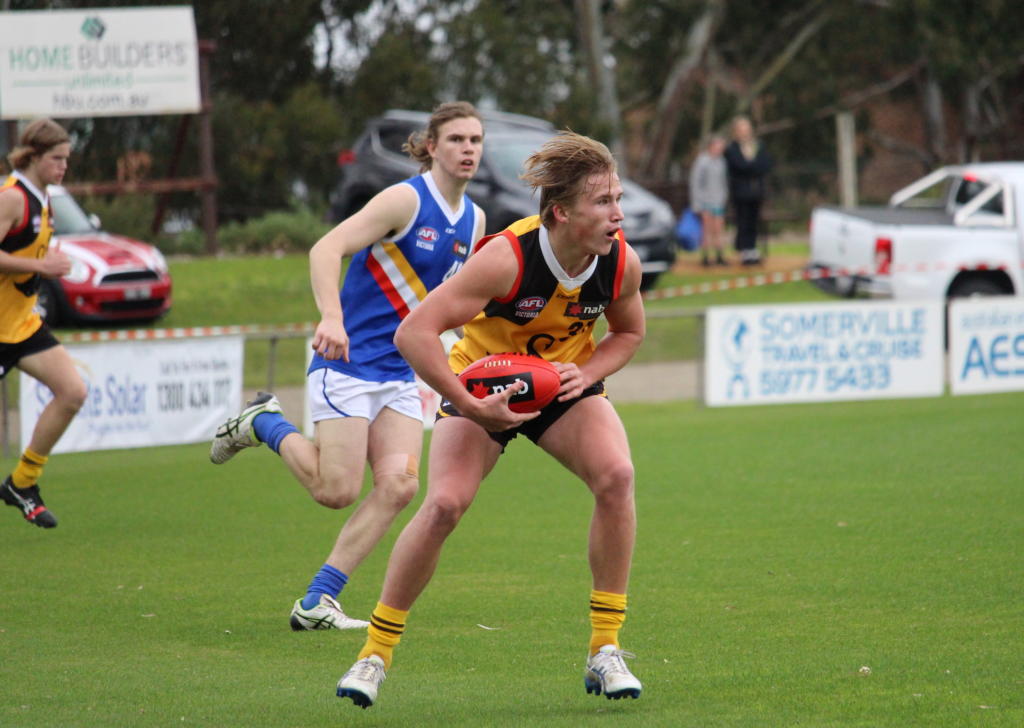 DANDENONG Stingrays head coach, Nick Cox says his side has come back in “really good physical condition” after a year away from competitive action, as its NAB League return edges closer. The Stingrays will take on Gippsland Power in Round 1 of the 2021 season, with the two country regions set to lock horns at Morwell Football Ground on Saturday afternoon. They should know each other well, having trained together and enjoyed a scratch match during preseason.

“I got together with (Gippsland coach) Rhett McLennan and we had a bit of a training session, then played a praccy match or four-quarter match-sim,” Cox said. “Expectations are like usual, we’re a little bit unknown in what we’re going to roll out but hopefully like usual our boys will give themselves every opportunity when they play the first three weeks and hopefully start creating some interest from there.

“Obviously the NAB League season has changed a little bit from previous years, but it’s a credit to our boys and I think it’s across the board, that 95 per cent of them have come back in really good physical condition. “That’s also credit to our strength and conditioning coach Ben Benson with the program he put out before they came back into training.

“We’ve come back in obviously not the same amount of time than in past seasons, but the intrinsic motivation by themselves has been fantastic and I can’t commend them enough at this stage with the physical condition. Whether they’re going to be up to speed fundamentally… we’ll wait and see against Gippsland on Saturday, it’ll will be exciting to see what they roll out.”

As the top age jumps up to 19 in the NAB League, Cox says those returning talents know where they stand and will largely rely on the first three weeks of the season to determine where they go next. Apart from nearly doubling the number of 19-year-olds listed, he maintains it will be “same-same” going forward in terms of how the program incorporates 17 and 18-year-old prospects.

In terms of the Stingrays’ style and strengths across the board, a focus on role specifics and giving players extended runs to shine has been evident, with an “exciting” brand of football what Cox and his troops will look to bring to the table in 2021.

“The big thing this year is getting players to understand role specifics and settling them there,” he said. “Not just for one or two games, but giving them an opportunity for a certain amount of weeks and if they can’t play that role, they’re good enough to move on somewhere else.

“Our style will be an exciting one, I reckon we’ll make a few mistakes along the way but the big thing in the NAB League is being able to showcase and execute talent, and most NAB League players are there because of that. We don’t want to take that away, we’re probably five per cent structure and 95 per cent go out and play.”

Looking at the standouts across Dandenong’s squad, skipper Bayleigh Welsh remains among the top-agers looking to impress, while vice-captain Connor Macdonald is one of the region’s most promising 18th-year talents. Cox highlighted a number of names which should pop up throughout the season as key figures in the side, with the potential to feature at VFL level.

“There have been a lot of standouts,” he said. “We talk about moments a fair bit at training and in gamedays and I reckon a lot of our kids have had those moments, and some more than others.

Clayton Gay and Bryce Milford have gone away and done a little bit of preseason at Casey and played a couple of practice matches there, so it’s clearly evident that they’ve come back stronger. There’s always going to be someone that bobs up out of the ground and produces something from nowhere and at the moment, we could have half a dozen kids doing that. We’ll just have to wait and see.”

Welsh and Macdonald will lead a five-man leadership group, which is a touch different to what Dandenong has implemented in the past. Clarke and Bergman will also be in that mix, along with Daniel Didomenicantonio to ensure that four of the five players included are of that 2003-born group. Macdonald will lead the side out on Saturday, with Welsh unavailable for selection.

Cox was also high on some of the Next Generation Academy (NGA) talent rolling through the Dandenong region, with Josiah Kyle (St Kilda) joining Melbourne NGA prospects Mac Andrew and Kobi George in the final squad.

Having already coached through eight rounds with the girls side, Cox gave a glowing review of how the club as a whole has come together, with some serious momentum being gathered. He also sought to thank Dandenong’s strong coaching core for the vast development the region has overseen this year.

“I’m really happy that the club is really coming together as one,” he said. “The way the girls have played and the style they play, we’ll probably try and emulate it in the boys. They’ve created a winning culture and we’ve got girls in Vic Country so I think the boys will make sure they’re doing the same thing. It’s been exciting so far and having the overlap has been good for the NAB League, it’s been really exciting to see how all that’s worked.

“We’ve got a really close, strong coaching panel and I’d like to acknowledge the amount of work they’ve done… the amount of development we got into (the players) through really good coaching is credit to our region and what we’ve been able to do. It’s credit to our local football leagues as well, so things are going quite well in our region and the NAB League is obviously elite, but there’s a lot of work done by a lot of people who go unrecognised and hopefully we can continue to produce players going forward.”