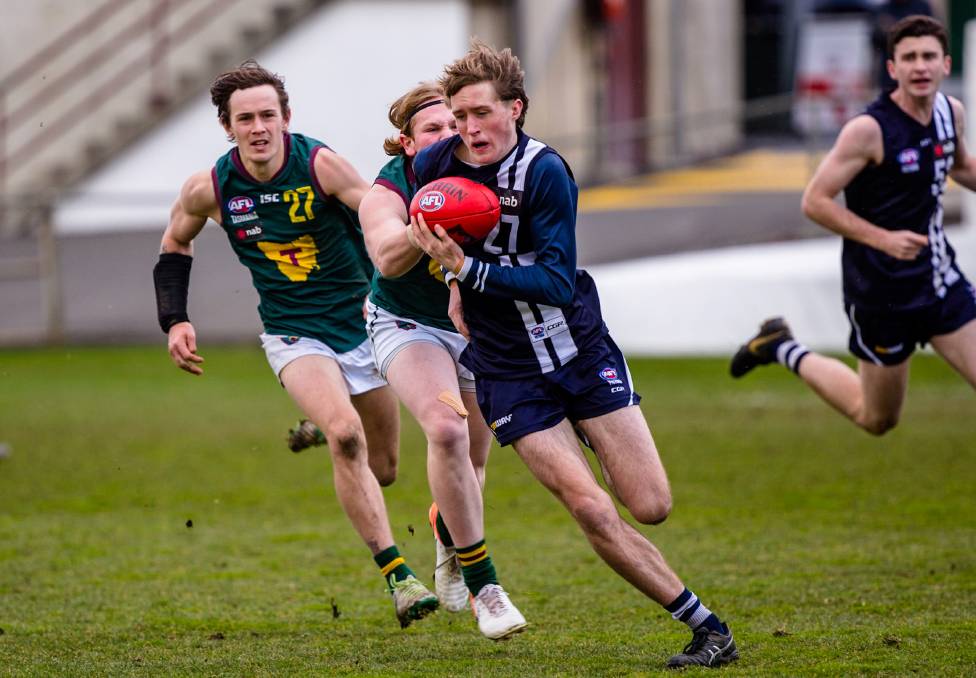 GEELONG has long been a strong breeding ground for footballing talent, and that trend is likely to continue in 2021 as the NAB League talent region boasts a promising Under 19 squad. Headed by new coach Paul Corrigan, who has also been overseeing the girl’s and Vic Country programs, the Falcons will look to build exponentially on their three-win 2019 campaign and produce another batch of exciting draftees.

Speaking at the 2021 NAB League season launch, Corrigan acknowledged the challenges of a restructured season and getting back to usual programming after over a year away from competitive football, but gave a glowing review of how his troops returned during preseason. He says the group is “really excited” ahead of its Round 1 fixture against Greater Western Victoria on Thursday.

“There’s going to be excitement in the air and I reckon there’s going to be a few nerves for the boys, but we’re looking forward to hitting that Round 1 mark,” Corrigan said. “The boys have obviously been training for a little bit now, we had a camp with the Falcons boys on Friday and even just speaking to a lot of them on Saturday, a lot of these boys haven’t played a real game of footy for 18 months, so it’s such a long time when you think about it.

“I haven’t been surprised but a lot of our boys and girls have come back in great shape and they’ve had balls in hands through that (lockdown) period as well. “We haven’t found too much where we’ve had to have weeks of just slow end-on training, we’ve been able to get back into training and just monitor across both programs and they’ve been handling it really well. We think they’ll be fine, we think they’ll be up to speed and ready to go for Round 1.”

Looking at the revamped season schedule, the top age has been lifted to 19 and those mature prospects have already been afforded the opportunity to train with Victorian Football League (VFL) sides. The first three rounds loom as important fixtures for all involved, with top-agers using it as preparation for VFL action, while others who are still in school will break off to compete in those competitions before returning to the NAB League.

Corrigan says while the top age has been lifted, he is happy for the draft age to remain at 18. He also maintains that Victorian talents will not be disadvantaged by the year off, but will instead “blossom” from the fresh opportunities which come their way.

“You’ve got to put a positive spin on it and we’re running all these programs with the girls and boys and I think the way it’s being handled at the moment, I’ve been really pleased with how it’s been going,” he said. “I’m looking forward to seeing how the boys start in those first three rounds and I think it’s a great thing that they’re able to have a bit of a recess period, go back to their school footy, go back to their local clubs… I’m really looking forward to seeing how it works.

“Obviously it’s been really good to get them back into sport again but we also realise too that having that year off, it’s a long time and when you take away something that both the boys and girls love doing, it’s had its challenges. Even going forward too, it’s still a bit of an unknown what the season will look like at times, the frustrations that they might have with how much footy they’ve missed. So we’re sort of just training them at the moment and making sure they’ve still got a really balanced lifestyle out of footy as well.”

In terms of the Falcons’ top prospects in 2021, top-agers Gennaro Bove (captain) and Charlie Brauer (vice-captain) are set to lead the side, and while no players feature in the condensed AFL Academy, a bunch should be in contention for Vic Country duties. Below is a short list of some draft-eligible Geelong products to watch this season.

Gennaro Bove – set to again take on a leadership position in 2021, Bove is a self-motivated character. He has been training with Werribee’s VFL side and is looking to build his endurance base to suit the promise of added midfield minutes. His clean hands, skills, and agility are standout traits, which he hopes to weaponise throughout four quarters rolling forward from midfield.

Euriah Hollard – originally from the New South Wales region of Albury-Wodonga, Hollard is boarding at Geelong College. His is a small forward with terrific work ethic and a team-first mindset, which bodes well for high-level tackling pressure and scoreboard impact. He says he simply wants to be the best footballer he can in 2021.

Noah Gribble – coming off rehab for a torn ACL, Gribble returned to full training over the last couple of months and looks incredibly fit having earned a personal best in his first 2km time trial back. He hopes to continue his knack of finding plenty of the football, most likely starting on the wing or at half-back before moving to the inside.

Charlie Ham – the brother of Essendon’s Brayden, Ham garnered plenty of attention last year and says it kept him motivated over the break. Having cut his teeth off half-back he has been focussing more on strength rather than fitness to gain greater midfield minutes. Currently working two jobs and will hopefully get his first taste of senior footy this year through Geelong’s VFL team.

Indiana Parish – another ‘brother-of’, Parish continues the legacy of his family name at the Geelong Falcons. He is a versatile midfielder who hopes to simply get the nod for Round 1 with a few centre bounce vacancies opening up, but will likely also roll through the forwardline. Says he is keen, as everyone is, just to get back out there.

Toby Conway – the Under 16 All Australian ruck will continue those duties for the Falcons, looking to benefit from a clean slate this preseason after missing all of last year’s through knee surgery. His ruck craft is a strength, but Conway is looking to develop his forward craft while gaining the fitness levels required to provide more contests down the line, and a marking target inside 50. Another Geelong College student.

Charlie Brauer – the Falcons’ vice-captain bases his game off competitiveness and says his best position is down back, but hopes to play a bit of everywhere in 2021. He is improving his skills and will look to simply play a full season of consistent football with the Falcons and Cats’ VFL team. Out of Year 12 now and is working at Bunnings.