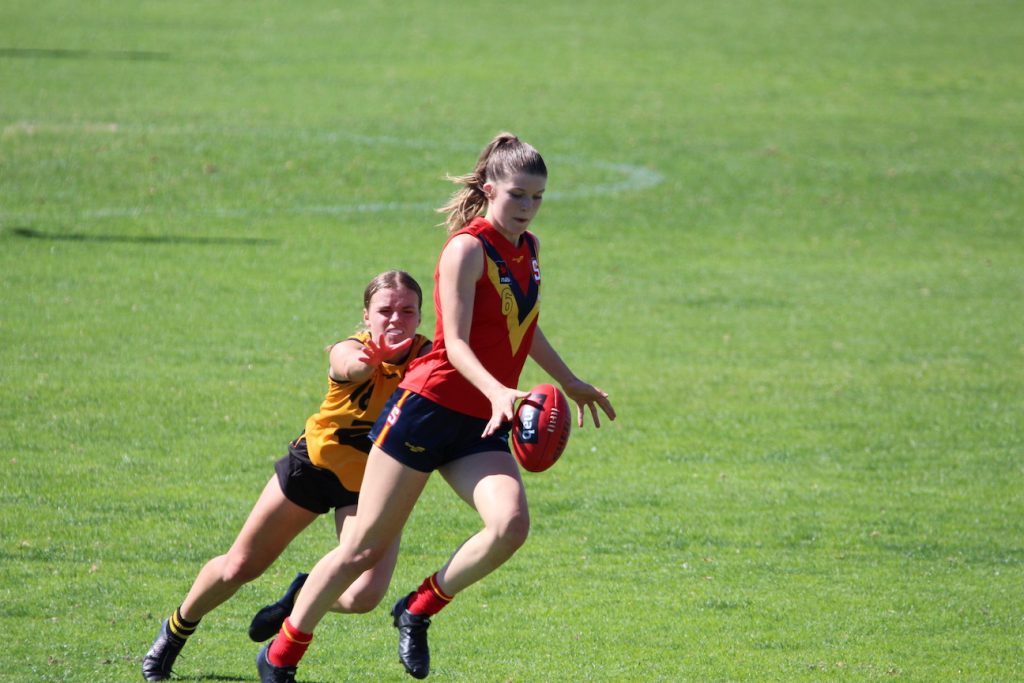 SOUTH Australia has held off a determined Western Australia by six points in the opening game of the 2021 AFL Women’s Under 19 Championships on Sunday. The two states clashed in perfect conditions at Flinders University Stadium, and given the teams boasted strong defences, it was no surprise to see the match was a low-scoring slog, but one that provided plenty of highlights. After getting out to a two-goal lead in the second term and then again midway through the last, South Australia could never quite shake the Sandgropers until the final siren, winning 3.5 (23) to 2.5 (17).

Indeed, even the final kick of the day – a quick siren-beating snap from Melisha Hardy – threatened to change the script, though it ended up falling short in her bid to level the scores on the buzzer. More than once it looked like South Australia had the game on its terms, but the West Australians refused to give in, and the defence held up against fierce pressure, with their counterparts down the other end doing the same when forwards had golden opportunities.

Lauren Clifton opened the scoring five and a half minutes into the match after a great Georgia Swan pass, with WA missing a couple of chances through Ella Roberts and Jaide Britton. Roberts would end up having plenty of chances throughout the day, with three attempted shots on target marked in the goalsquare or on the goal line.

When a coach-killing turnover from a rushed kick in the back pocket found an uncontested Gypsy Schirmer 25 metres out straight in front, the AFL Women’s Academy member made it two from two for the home club South Adelaide, and then kicked a behind on the run five minutes later for the Croweaters to be out by 11 points late in the quarter. East Fremantle’s Chloe Reilly saved the day with a goal from a turnover herself, converting the set shot a few minutes out from half-time and cutting the deficit to five points at the main break.

The third term was an armwrestle with neither team able to put one through the big sticks. The home crowd was getting animated at some of the 50/50 calls going the way of the visitors, and when Laitiah Huynh‘s quick hands to Clifton in the goalsquare was deemed a throw, the grandstand was up and about at the missed opportunity. There were run-down tackles galore through the match, including a huge one from Beth Schilling on Sarah Branford, which even eclipsed Roberts’ effort in the first term on Tamsyn Morriss running into goal.

South Australia had the early momentum in the fourth term, peppering the goals with some flying shots from Alana Lishmund, Lauren Breguet, Jade Halfpenny and Huynh who all tried their luck. That was until the play of the day, from defence to attack, starting with Brooke Tonon, involving Julia Clark, Charlotte Dolan, Swan and then Keeley Kustermann on the end of the chain. The West Adelaide bottom-ager made no mistake with the set shot goal, converting the major and handing her side what looked to be a match-winning 11-point lead.

Roberts had other ideas however. A freakish snap from the pocket four minutes later – which many could not believe – bounced on a right angle and through the goals. However she had multiple shots that were identical earlier in the match, but this time the goalkeepers in Alex Ballard and Jamie Parish were not there to stop her. A Huynh behind made it six points with four minutes on the clock, and tensions both on and off the field were high.

The Peel Thunder tall in Roberts was marking everything late in the game, then even roved Zoe Prowse‘s tap and kicked towards the square to try and kick her second, but Parish was there to mop it up again. The final minute saw a clever play from Schirmer, aware her frustrated opponent was going to knock into her back late made sure it was a 50-metre penalty and chewed more time off the clock. When Prowse bombed it inside 50 up the other end with 30 seconds left, many were ready to celebrate.

This time, it was Makaela Tuhakaraina who had other ideas. Having played a solid game on debut for her state in the code, the South Fremantle elite speedster just burned through the defence, taking a couple of bounces and weaved her way to the middle, amazing even the South Australian fans. She hit up captain Britton who put the ball towards Roberts and the quick snap inside 50 – after a momentary fumble – went to Hardy who snapped a second before the siren sounded, but it went high and wide, not getting enough distance or penetration on the kick to level the scores.

Picking best players across both sides was near impossible, with Prowse being outstanding in the ruck, Huynh great up forward, particularly in the first half, and Zoe Venning and Kustermann clean around the ball. Halfpenny kept being a thorn in the opposition’s side, whilst Ballard, Hannah Prenzler and Brooke Tonon all drove the ball out of the defensive 50 time and time again.

For the losers, Roberts was hard to miss with her game-breaking ability, but her Peel Thunder teammates in Schilling, Courtney Rowley and Britton were all solid across four quarters. Matilda Dyke on the last line intercepted plenty of footy, while Tara Stribley created some run and carry on the outside, and Emily Bennett was terrific at half-back.

All in all, both sides would have plenty to take out of the game and will be well prepared to head to Queensland in a fortnight where South Australia takes on the home state and the Allies, while Western Australia faces both Vic Country and Vic Metro.