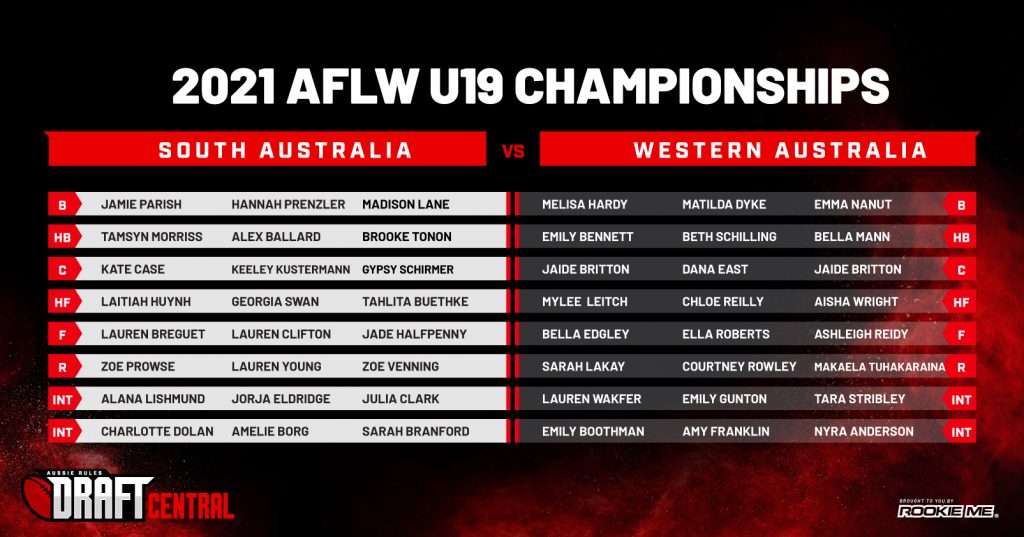 AFTER more than 18 months without an AFL Women’s Under 18 Championships, the adjusted Under 19 Championships kick-off tomorrow with South Australia up against Western Australia. It will be the first match of the Round 1 fixtures that also feature Vic Country locking horns with Vic Metro, before the four sides – along with host state Queensland and the Allies – battle it out at Metricon Stadium on April 12 and 15.

South Australia come into the match with plenty of experienced inside talents and outside runners with great speed. Their defensive pressure and abundance of running defenders are other highlights of the squad that will hold them in good stead. For Western Australia, they have a dynamic and versatile line-up, with plenty of goal-scoring options, and contested marking talents who are strong one-on-one.

There is plenty of X-factor in the front six for the Sandgropers, with Ella Roberts a bottom-age marking target with great athleticism and quick speed off the mark. She can pull down contested marks and snap remarkable goals, leaving the opposition in awe of ways to contain her. Hannah Prenzler has been named to potentially take her on first, with the Sturt talent able to read the ball well in flight, and will want to stay in front of her opponent given Roberts’ speed on the lead. Bella Edgley and Chloe Reilly are the other marking targets inside 50, with Madison Lane smaller than Edgley, but smart at ground level, whilst Alex Ballard will be an even match with Reilly in the air. Glenelg duo Tamsyn Morriss and Brooke Tonon will look to provide the run off half-back against a couple of youngsters in Mylee Leitch and Aisha Wight, while Jamie Parish will look to use her strength against Ash Reidy in the other pocket.

Up the other end, a small South Australian forward line will look to get the ball to ground and use their speed, with the forward entries crucial to the success of the Croweaters. Western Australia have the advantage in the air, with many of their defenders more than capable one-on-one, and taller than their respective opponents. Jade Halfpenny is the key tall inside 50 for the home team, and she has been named in a forward pocket against Melisha Hardy. The Swan Districts defender is good one-on-one, and whilst she has some toe, Halfpenny might have her in that regard, so will be better to utilise her speed on the lead. One-on-one Hardy will be difficult to beat, whilst Emily Bennett and Matilda Dyke are others in the same boat. Tahlita Buethke will have the speed in her matchup, with Lauren Clifton also having that advantage despite predominantly playing up the other end at SANFL Women’s level. Lauren Breguet returns after a couple of weeks off due to concussion, and she will have a great battle one-on-one with Emma Nanut, whilst Laitiah Huynh and Bella Mann are both tackling, fierce players who will not take a backwards step. Beth Schilling will have too much height in the air for Georgia Swan, but the Sturt forward will look to compete and bring the ball to ground and create scoring opportunities.

The midfield battle has a massive number of not-to-be-missed one-on-ones. Regardless of who lines up on who, it will be a classic contest. Lauren Young is the youngest player on the field at 15-years-old but will have the height advantage over her rivals, and ironically is two centimetres taller than her ruck, Zoe Prowse. The Sturt tall has a great leap and will look to take advantage, but has an equal in that regard with Sarah Lakay incredibly athletic and nine centimetres taller than the South Australian. Both have similar attributes but Prowse has more experience and will cause headaches with second efforts around the ground. Lakay will look to get clean taps to the advantage of her teammates to stop Prowse applying pressure as that “fourth midfielder”. The battle between Zoe Venning and Makaela Tuhakaraina will be one that provides plenty of punch. Both have an incredible appetite for contested ball, and will not take a backwards step. Tuhakaraina has the upper hand in athleticism with elite speed and agility, but Venning is no slouch either, consistent across the board. She has more runs on the board as well, with her opponent coming from a rugby union background. Venning will have the footy smarts to go forward and impact the scoreboard there.

Courtney Rowley and Dana East will take on the West Adelaide youngsters in Young and Keeley Kustermann. Rowley and Kustermann both have terrific kicking skills and great balance, whilst East is terrific inside the contest with clean hands, able to distribute the ball to teammates on the outside. Young is developing her game with great ability in the air and around the ground, and will be too tall for her respective opponents around the ground and is the tallest South Australian in the match. Prowse will have to use all of her energy to battle against multiple opponents, with Lakay likely to receive support from Schilling and South Fremantle’s Lauren Wakfer, whilst Prowse will rely on Halfpenny and Jorja Eldridge as potential back up options. On the wings, AFL Women’s Academy member Gypsy Schirmer provides that elite speed, and Sandgropers co-captain Jaide Britton will look to contain her whilst getting the ball forward in transition herself. On the other wing, Kate Case and Naomi Baker both share similar traits with the ability to move the ball in transition and play off flanks as well.

The depth of both sides is impressive, though the bench talent goes in the favour of Western Australia, with AFL Women’s Academy member with Amy Franklin keeping the opposition guessing able to play up either end. Tara Stribley is easily a starting wing on any given day and will provide terrific run on the outside. Nyra Anderson is a goal-scoring machine and has come in due to injuries and is a 2001-born talent who is making her mark at WAFL Women’s level year after year. Developing ruck Wakfer, as well as fellow bottom-agers Emily Gunton and Emily Boothman round out the interchange. For South Australia, they have a host of fierce tackling talents there, led by Norwood’s Alana Lishmund, North Adelaide’s Julia Clark and Woodville-West Torrens’ Charlotte Dolan. Eldridge has the versatility to play in multiple positions, as does Amelie Borg who gets her chance as a bottom-age tall. At the opposite end of the height scale, the tenacious Sarah Branford will provide skill and decision making in the forward half.

The game is set to be a thriller, with the teams really strong in different areas. It is predicted to be mild temperatures, but no rain at this stage, so the talls of Western Australia should be strong if the inside 50s are to their advantage. South Australia have the strength on the inside to win the ball forward, but cannot afford to hack it inside with the Sandgropers’ ability to intercept so well, and be in front position on their opponent. Once the ball hits the deck, the South Australians will be favoured, but a lot of the match will be determined by the midfields. The midfield that can take full advantage and get the ball forward in terms of quality rather than quantity will automatically be well placed to take out the match.