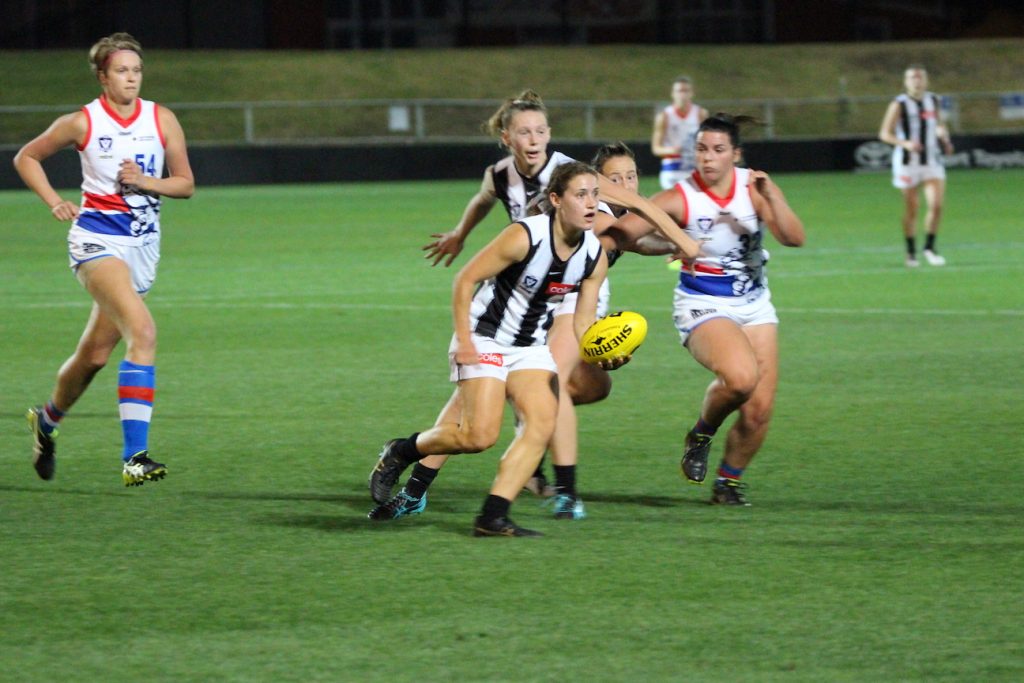 ROUND 5 of the Victorian Football League Women’s (VFLW) will play host to a number of action packed clashes as Collingwood and Port Melbourne look to maintain their undefeated status. The competition is only getting started with sides still trying to finalise their most potent line-ups and looking to solidify their standings in the competition.

The Magpies and Casey Demons are set to lock horns in what is set to be an enthralling contest between the two top four teams. Collingwood are yet to drop a game while the Demons have only lost the one and that was back in Round 2. Since then, Casey have really ironed out the creases and managed to apply a wealth of scoreboard pressure. Playing a similar style to the Pies expect both sides to attack the coalface hard and look to extract the ball quickly to give their forwards the best chance to score.

Maddy Shevlin has been a star for the Pies but is a key out this week while Amelia Velardo and Matilda Zander have plied their trade for the black and white constantly backing up their efforts across the ground. At their spiritual home ground expect the Pies to come out firing and to have their kicking boots on after an inaccurate showing last round. For the Demons, Tahlia Fellows has proven to be a key cog in the side but will also miss this round, while Chantel Emonson and Bridie Winbanks are key inclusions for the Dees.

It has not been a great start for either side, but a win here could really change their outlook for the remainder of the season. Darebin sit winless from four games while the Saints have mustered up just the one win but sit seventh on the ladder. The tussle between the two sides will be tantalising to say the least as they look to claim some type of ascendancy and build the foundation for a strong middle part of the season. Typically low scoring sides it will come down to which side is able to create enough opportunities to push forward and convert.

The defensive unit for the Falcons will have their work cut out for them up but will be glad they are not going up against the likes of livewire Renee Saulitis who managed a major last round despite the loss. Other key figures for the Saints consistent of Alexandra Hynes and Madi Capsalis who both impressed last week and will be looking to bring that same level of heat and intensity. Unable to hit the scoreboard last round, the Falcons will be hoping that Steph Simpson and Sally Lynch can find their kicking boots while Kathleen Roe has proven to be a key ball winner for Darebin.

The Western Bulldogs will host Geelong at Whitten Oval on Saturday in search of their second win of the season. The Cats currently hold higher ladder positioning clinching fifth spot, and a win here could see them jump up the ladder while a loss could add to the ever growing midtable logjam.

Geelong fell short last week despite the best efforts of Michelle Fedele who booted two goals and they will once again be hoping for Fidele to steer the ship in front of goal. Both Tamara Smith and Paige Sheppard are likely to cause headaches with the young duo able to win their fair share of ball for the Cats. On the other hand the Dogs have a number of key figures that will be eager to get amongst the action such as the senior-listed Bailey Hunt. Captain Riley Christgoergl is another one to keep an eye out for the Dogs as the ever developing Amelia van Oosterwijck and Annabel Strahan.

The Blues are coming off a narrow eight point win last round, while the Hawks suffered their third loss of the season making for an interesting matchup. Carlton will be playing with a wealth of confidence and looking to use their silky ball movement to put Hawthorn on the back foot in the opening stages of the game. A win here for Carlton could push them into the top six and really help them build some ascendancy.

Veteran Meg Hutchins is a lynchpin for the Hawks no matter where she plays but will miss out this week, meaning the midfiel will need support from the likes of Northern Territory product Dominique Carbone, Lauren Szigeti and Catherine Brown if they are any chance to topple the Blues on Saturday afternoon. For Carlton, youngster Winnie Laing only continues to get better with time, learning off the likes of Serena Gibbs, Maddy Guerin and star recruit Akayla Peterson.

Claiming their third straight win last round the Bombers will be riding a wave of momentum but that could quickly come to an end with their clash on Sunday against the undefeated Port Melbourne side. The Borough are full steam ahead, playing with class and conviction meaning Essendon will have their work cut out for them if they are to upset the apple cart and continue their winning ways.

The Bombers have a strong contingent of youngsters across the ground with Alana Barba and Felicity Theodore proving to be a consistent pair able to burrow in and commit to the hard yards. Georgia Nanscawen is a real game changer for Essendon and will be looking to be at her damaging best coming off a stellar Round 4 performance while Mia-Rae Clifford is also an excitement machine for the red and black. The Borough have no shortage of playmakers with Sophie Locke quickly making a name for herself alongside Cleo Saxon-Jones, though will need to make do without Locke this round. Other contributors that the Bombers will have to be wary of are Phoebe Monahan, Emily Harley and Sarah McNamara who has proven handy in front of the big sticks in recent weeks.

The final game of the round sees North Melbourne take on Williamstown with the latter looking for their third win of the season. It has been a trying campaign for North Melbourne who have only secured the one win so far but will be chomping at the bit to alter that outcome with a victory over their higher placed opponents. Williamstown come into the clash off a solid win against the Doggies, so expect them to use that momentum to apply some early scoreboard pressure.

The Seagulls have a good spread of players capable of stepping up to the plate and plying their trade with Ruby Tripodi one of those key figures. Erin Meade is another consistent figure for Williamstown while Sofi Georgas is coming in off a strong performance last round. For the Kangaroos Brooke Brown is a real livewire able to navigate her way around the goals and most importantly convert those opportunities while Alexia Hamilton and Ciara Fitzgerald are also viable options.