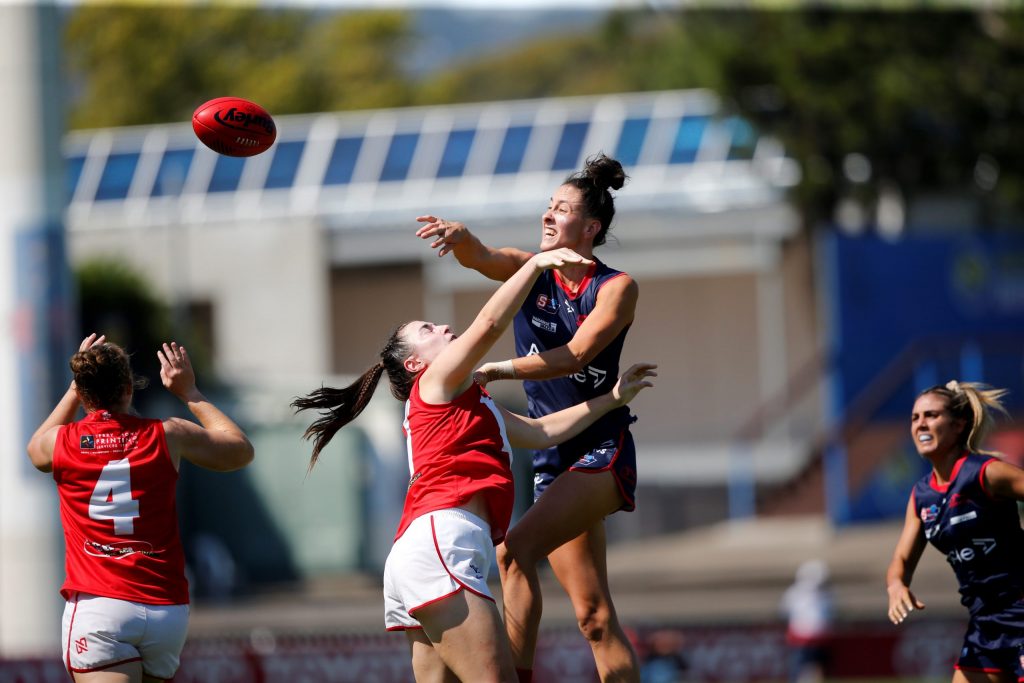 THERE was carnage in a good way at the selection table for the South Australian National Football League (SANFL) Women’s teams, as their most talented youth prospects departed to represent their state at the AFL Women’s Under 19 Championships on Sunday.

The second grand final rematch of the 2020 SANFL Women’s finale has the two sides with very different lineups to last year’s decider. On top of the host of players returning or entering the AFL Women’s competition, both teams have plenty of State Academy members who are out for their clash with Western Australia. South Adelaide lose Gypsy Schirmer, Tahlita Buethke and Lauren Clifton to the match, with North’s Kate Case, Julia Clark, Jorja Eldridge and Amelie Borg also out of the game. Both teams receive some talented reinforcements with Lisa Whiteley, Madison Bennett and Tiffany Copley among the ins for the Panthers, while Kelly Barltrop and Lauren Daniel join four new players – including former Panther Emogen Johnson – in their starting side.

The Roosters defence still has the twin talls in Kristi Harvey and Talia Radan, as well as Erin Sundstrom, whilst Jaimi Tabb played her best game of the season last week, and will match it with the likes of Czenya Cavouras and Nicole Campbell in there. Montana McKinnon is in red-hot form and will be tipped to continue that against the Roosters, as the forward duo of Jorja Hooper and Jess Kirk will be looking to apply more scoreboard pressure in this one. North Adelaide would be confident of bouncing back, though the Panthers still have a really strong midfield – including State Academy emergency Sarah Wright – and could take control there.

Kicking off a double-header at X Convenience Oval, the 1-3 Sturt take on the in-form Woodville-West Torrens Eagles in what could make history for the visitors. The Eagles only won two games in their second season last year – after going winless in year one – and could be eyeing off a remarkable third straight victory if they can topple the last placed Sturt. They will need to do it without a host of talents including State Academy members Charlotte Dolan and Jamie Parish, as well as Zahn Anthony and Stephanie Walker. Sturt have even more outs due to the Academy game, with the Double Blues’ football factory of Alex Ballard, Georgia Swan, Hannah Prenzler and star ruck Zoe Prowse all out of the team, as well as captain Maya Rigter with a knee injury.

It will give plenty a players a chance to step up, with the likes of Sarah Wallace and Millie McCarthy new faces. Ella Vitucci is the sole new face to the Eagles’ outfit, though Renee Forth returns for some extra experience, as does young gun Jaida Tabb from injury. Jess Good will need to step up again in her second game, taking on another secondary ruck for her side in Amie Blanden. Both have great talent and will thrive on the opportunity, whilst the likes of Alisha Gepp and Shineah Goody will go head-to-head in an awesome young battle through the middle. Jess Sedunary and Forth add that AFL Women’s experience for the Eagles, while Sturt will have to shuffle around the backline and hope the midfield of Isobel Kuiper and Elsie Dawes can control the tempo.

West Adelaide will look to snap a two-game losing streak when it comes up against Central District on a three-game losing streak of its own. The Dogs are back at home, and in a tight competition are still only two wins off the top two. They will want to convert their almost-wins into victories however, making two confirmed changes with Laitiah Huynh and Madison Lane off to represent South Australia. The home team has named an extended bench with the likes of Emma Keys and Caitlin Wendland making their way into the side. The Bloods have lost four of their stars due to the Academy game and AFL Women’s, with Keeley Kustermann, Lauren Young and Zoe Venning all out of West Adelaide’s team, while Chelsea Biddell steps up to the Crows again. Bethany Sigley is in line to potentially make her debut, whilst Ailish Considine could replace Biddell as that experienced forward.

The Bulldogs will remain relatively stable to past weeks despite their two young talents out of the side, as captain Shelby Smith is in red-hot form with Caitlen Teague and Lauren Smith also having great games in past weeks. Up forward Katelyn Rosenzweig did not miss a beat after what looked like a bad injury two weeks ago, but turned up and impressed last round. Demi Sonneman has been a reliable force down back and will be important to limiting West’s scoring chances, with Kasia Culhane down there and Sharnie Whiting thrown forward as a target. Bec Owen and Zoe Greer make a strong midfield with Louella McCarthy and ruck Kate Walsh, in what will be a fascinating clash of midfields.

The new top of the table Redlegs will host an up-and-down Glenelg which now sits at 2-2 and only one win off the top two places. The Bays had a fantastic come-from-behind win over West Adelaide last week, whilst Norwood’s victory over North Adelaide handed them top spot. The Redlegs will be without young guns, Alana Lishmund and Jade Halfpenny who miss due to the Academy game, as well as Elizabeth Drake who is out due to a quad injury. Into the side comes Tesharna Maher alongside a couple of Morphettville Park and ex-Glenelg talents in Cammie Williams and Celestine Dona to make their debuts in the game. Rori Perryman could be a debutant for the Bays, coming into the side with Rachel Aistrope, Rhiley Ritchie, Milli Gentle and Sheridan Howell. They replace Academy players Brooke Tonon and Tamsyn Morriss, as well as Dayna Cox (Adelaide AFL Women’s) and Lucy Earl (injured).

Both sides still have very strong sides despite the omissions, with Mattea Breed named in the ruck with Leah Cutting at centre half-forward. Jess Macolino and Lana Schwerdt – the most recent Breakthrough Player of the Week – are in good form, whilst Ella Murison slotted two goals last week. Also in good form are the likes of Sam Franson, Emily Bates and Ellie Kellock in the yellow and black, whilst Piper Window has been consistent through the season and developing well, while Molly Affolter provides the height through the ruck and up forward. Norwood will be favourites in the game, but it should be a tight contest.