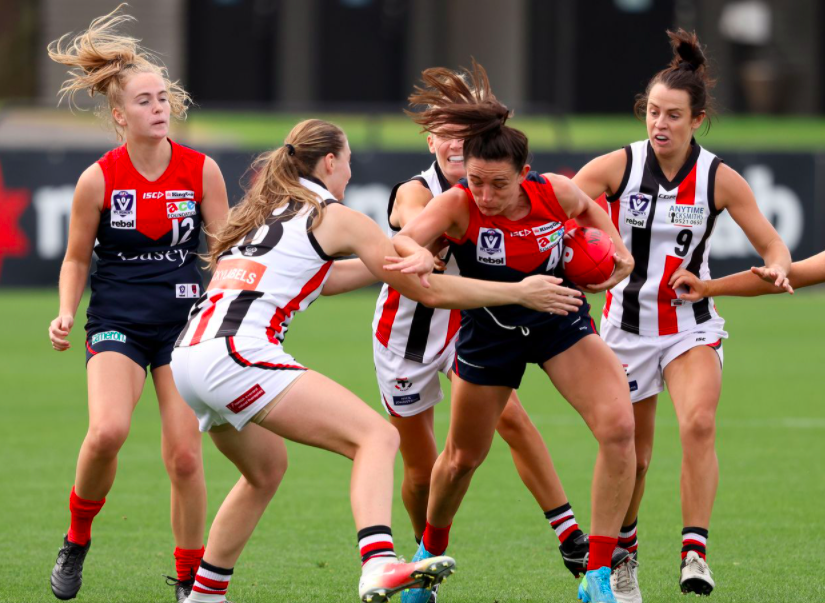 THE Victorian Football League (VFL) Women’s returned for Round 4 on the weekend, with another six enthralling fixtures spread over Saturday and Sunday. As the season runs concurrently alongside that of the AFLW, top-flight players from Victorian clubs who miss out on senior action will be able to run out for what are effectively reserve sides in the VFLW. Round 4 saw promising elite level talent scattered across the eight aligned teams, with players again staking claims for call-ups.

Having previously boasted a wealth of senior-listed guns in their lineup, the Western Bulldogs’ tally was down to two as they went down to standalone side, Williamstown on Saturday. Bailey Hunt‘s strong return from injury continued as she found plenty of the ball, while Amelia van Oosterwijck was another to get her hands dirty in midfield as the only other AFLW representative wearing red, white and blue.

Another team usually stacked with senior talent is Geelong, though the Cats took quality over quantity in their 16-point home loss to Port Melbourne. Maddie Boyd‘s improvised ruck role has seen her hit some handy form at state league level, and that was no different on Saturday evening as she dominated the airways. Northern Territory native Stephanie Williams was busy at ground level with her pressure game, while also finding the goals alongside Georgia Clarke.

The Borough had some strong input from their Richmond-listed players, with Sarah Sansonetti and Hannah McLaren both featuring among the votes while Alice Edmonds, Phoebe Monahan, and young tall Cleo Saxon-Jones all kicked goals. First year midfielder Luka Lesosky-Hay is another who continues to find her feet, having returned arguably her best senior-level performance to date.

Among a half-dozen Melbourne players pushing for call-ups in Casey’s win over the Southern Saints was Niamh McEvoy, who snared another two goals as the best player afield. 2020 draftee Isabella Simmons also bagged a major score for Casey, as did Renee Saulitis for the Saints. Meanwhile, Nadia von Bertouch continues to push for a recall in the red, white and black after another strong outing.

Carlton’s significant showing of AFLW talent shone through in the Blues’ victory over North Melbourne, as the likes of Serena Gibbs (one goal), Winnie Laing, and Maddy Guerin all earned votes. The latter will be unavailable for selection next week through concussion protocols, while Brooke Vernon (ankle) will also miss a couple of games. On a lighter note, promising tall Paige Trudgeon was another to find the big sticks in Carlton’s win.

Speaking of, North forward Brooke Brown continues to show promise in front of goal after snagging four in the loss. She may worth a second senior berth given the Roos’ two-goal effort in Round 8. Katelyn Cox was another senior-listed representative to impress, as Bethany Lynch also took the field for her third VFLW game running.

Collingwood remains unbeaten after accounting for Hawthorn in Round 4’s final fixture, with solid impact coming from the Magpies’ elite level talent. Maddie Shevlin dropped back down and again proved her worth on the outside, claiming a full set of votes in the winning side. Young tall Abbi Moloney showed promise up forward and kicked a goal, while Amelia Velardo continues her development down the other end.