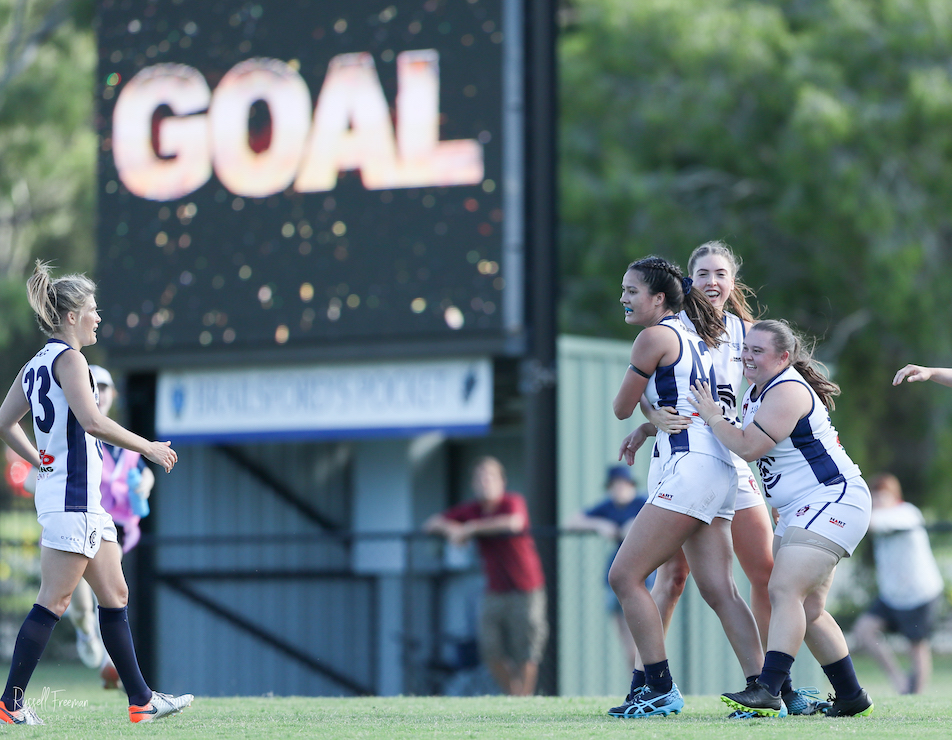 THERE is just one remaining undefeated team in the Queensland Australian Football League (QAFL) Women’s competition, following defeats to top two teams, University of Queensland and Aspley. They went down to Coorparoo and Yeronga South Brisbane as the ladder tightened following Round 4 results. Coorparoo and Yeronga South Brisbane were on the better side of those respective results, while Bond University stood tall to snatch top spot thanks to another win, and Maroochydore secured their first victory of the season with a terrific win over Coolangatta Tweed.

The game of the round was easily Coorparoo’s upset victory over the previously undefeated University of Queensland. Backing up their win over Maroochydore by a point in Round 3, the Kings proved their can get it done in nail-biters, winning a second consecutive match by a solitary point, not to mention the exact scores. In an eerily similar result to the previous week, Coorparoo had to come back from an eight point deficit at the half-time and three quarter time breaks before securing the win with a final quarter flurry, two goals to zero and win 5.2 (32) to 4.7 (31).

Chelsea Winn slotted two goals in the win, while Jessica McLean, Jenae Govan and Emma McKenzie also slotted majors. Laura Blue was best on ground, while Charlotte Edmunds and Gold Coast Suns’ Georgia Bevan were also outstanding in leading their side to the narrow win. Rachael Vetter kicked two goals in a losing side, as Lucinda Benjamin hit the scoreboard once again, as did Grace Brennan. Megan Hunt, Stephanie O’Brien and Mia Teubler were standouts for the Red Lionesses in defeat.

The Red Lionesses were not the only undefeated team to go down in Round 4, with Aspley Hornets’ great start to the 2021 season hitting its first road bump in the form of a hungry Yeronga South Brisbane. The Devils flexed their muscles in a big 22-point victory to bounce back from a rare loss in Round 3, booting three goals to zero in the first term, and peppering the goals for the rest of the match against the Hornets. Whilst the home team was brave and showed they could compete with the best, it was the Devils who took home the points, 5.11 (41) to 3.1 (19).

Lexia Edwards and Christine Okesene were lively up forward for the Devils in the win, as Lyneeka Hollows, Madison Goodwin and Clancey Sutton were also impressive, as was Lucy Bellinger who continued her great form at state league level. For the Hornets, Morgan Lanigan led the way with a goal, while Courtney Daniec and Michaela Campbell also snagged majors. Along with Lanigan, Kadie Fletcher was amongst the best on debut, while Lucy Pengelly and Bree McKenzie also stood out.

After a narrow one-point loss last week, Maroochydore stepped up for a 33-point victory over Coolangatta Tweed in front of home fans.The Roos took a while to find their range, kicking 1.8 to 0.1 in the first three quarters to lead by 13 points with a quarter to play. It was not until then that the home team stepped up, kicking 4.2 to 0.0 to blow out the margin to beyond five goals. The 14 scoring shots to one showed that Maroochydore had most of the play in its forward half, and were deserving winners on the day to breakthrough for the four points.

Makeisha Muller was the sole goalkicker in the first three quarters, and was joined by teammates, Brooke Matheson, Zoe Langley and Sophie Bale in the final term burst. Jacqueline Dupuy, Maggie Harmer, Rachel Crack and Chloe Gregory were all amongst the best for the Roos. The Bluebirds may not have kicked a goal, but Casey Wynne, Selina Priest and Leigh Alder were among the best on the day, as well youngster Keyshia Matenga, and AFL Women’s listed Beth Pinchin.

In the final game of the round, Bond University enjoyed a huge win over Wilston Grange, handing the Gorillas a fourth straight loss. The Sharkettes had 25 scoring shots to one, kicking 14 scoring shots to one in the first half, and restricting the Gorillas to just one major for the entire game. Winning every quarter of the game, the top of the table Sharkettes showed their strength with a comprehensive 69-point victory.

Jordann Hickey put in a best on ground performances, slotting four goals in the victory, whilst Lily Tarlinton managed the two majors in the victory. Mikayla Pauga, Shannon Danckert, Molly Ritson and Ellie Herron all kicked goals and stood out, while Alessia Smythe and Georgia Brehmer were also impressive for the Sharkettes. Sophie Wheeler kicked the only goal for the home side, while the experienced Rheanne Lugg and Ruby Svarc were the top players in defeat.

Looking ahead to Round 5, all four games are on Saturday with Coolangatta Tweed taking on University of Queensland, and Bond University hosting Aspley in the early afternoon games. Later on, Coorparoo will gun for three in a row when they take on the winless Wilston Grange, whilst Maroochydore lock horns with Yeronga South Brisbane at the same time, 4:45pm.