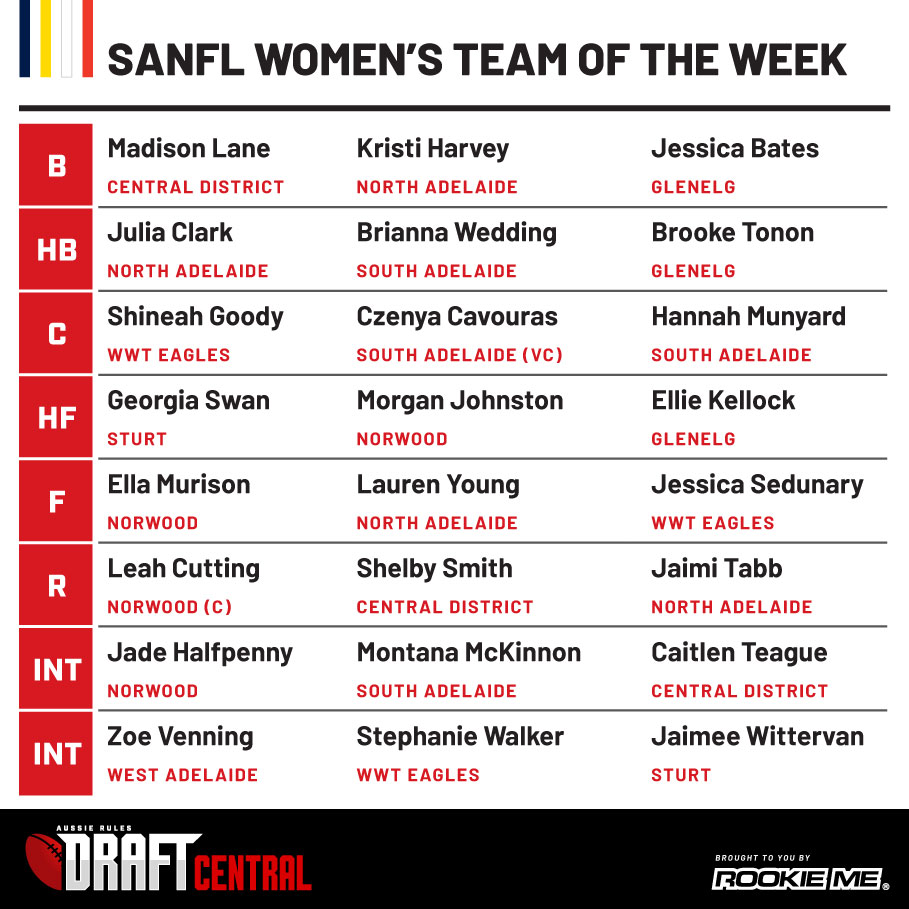 NEW ladder leaders Norwood and the resurgent South Adelaide top our list of nominees in the Draft Central South Australian National Football League (SANFL) Women’s Team of the Week for Round 4, with four players apiece in the squad. There was still plenty of shared contribution from the six other sides, with Round 4 winners Glenelg and Woodville-West Torrens Eagles, as well as losers North Adelaide and Central District having three players apiece. Sturt and West Adelaide only had the two each, but filled out the three emergency spots between them.

Norwood ruck Leah Cutting was named captain of the side after a dominant performance in the Redlegs’ win over North Adelaide, leading the way and retaking the starting ruck spot in the team. She was joined by teammates, Morgan Johnston, Ella Murison and Jade Halfpenny who all impressed in the forward half of the ground and midfield respectively. Also in the side is South Adelaide’s Czenya Cavouras with a strong role through the middle earning her the vice-captaincy for this year. Next to her in the side was the returning Hannah Munyard, as Brianna Wedding (centre half-back) and Montana McKinnon (interchange) also made the side for this week.

Glenelg had three representatives as they bounced back from a loss with a good win, with Jessica Bates and Brooke Tonon winning plenty of ball in the defensive half and running it down the ground, while Ellie Kellock capitalised with two goals up forward. Also up forward was Woodville-West Torrens’ Jessica Sedunary who slotted two majors in her side’s win over Central District, joined in the side by young gun Shineah Goody and Stephanie Walker this week.

North Adelaide might have dropped its first game of the season, but the Roosters had the reliable Kristi Harvey once again locking down full-back, while midfielder Jaimi Tabb, and fellow youngster Julia Clark also made the side after a strong performance. Central District’s loss saw a repeat of the three players from last week back in the side, with Shelby Smith in midfield, Madison Lane in defence, and Caitlen Teague on the interchange for Round 4.

The two remaining teams in Sturt and West Adelaide had the two representatives apiece. The Double Blues’ Georgia Swan and Jaimee Wittervan earned places in the Team of the Week for Round 4, while Hannah Prenzler was named as one of the emergencies. For West Adelaide, midfielder Lauren Young slotted three goals all from set shot opportunities close to goal, so as the round’s leading goalkicker was named at full-forward in this hypothetical team. Another State Academy member in Zoe Venning made the 24-player squad, while Chelsea Biddell and Keeley Kustermann were also close to squeezing in despite the loss, named as the other two emergencies with Prenzler.

DRAFT CENTRAL SANFL WOMEN’S TEAM OF THE WEEK: ROUND 4